Neves is actually pretty good at all the imaginary stuff Xhaka gets praised for by a strange sub culture of our fans. His long range passing actually is real and isn’t just to the nearest unmarked fullback.

I wouldn’t say I’m exciting by him but I do think he’s he genuinely talented enough and would offer loads more from the DLP position.A year ago this would have been rather hype.

My question is, as others have stated, is it really a position we absolutely need in the club? Oh well replacing Xhaka with an actual footballer should take us a few positions forward if not exactly to the level we need to be at.

The reason Xhaka got so many minutes and even a reprieve from being dumped 18 months ago is because Arteta needs a DLP in his system. Fernandinho has been doing that job for Guardiola for years so it makes sense that Arteta wants to fix this position.

Upgrading Xhaka would make this team better, but I don’t think Neves is what people had in mind. However, he won’t flop here. The price just needs to be right.

@Castiel absolutely right about Neves last season - his stock was much higher and I’m sure there’d be more hype if we had signed him then. Wolves as a whole have not been the team they were and that culminated in Santo leaving.

Yes - but we’re not signing a LB, or a backup CM - we are looking for a technical boss in the midfield.

If I’m proved wrong, fantastic - but can’t help but feel there are better options out there for £40-50m…ie Odegaard.

I hope people have tuned in to watch Neves. Focus on him. You’ll see why he’s not the guy.

I feel like most people on here have watched enough Premier League football and Wolves to know what he’s about by now tbh.

Focusing on a player does allow you to better gauge his work. We also see him in an setting with better players, similar to what he’ll have here.
Neves will most likely be starting most of the games for Portugal so it’s a good opportunity to see more of him that the odd Wolves match here and there and when we play them in the season.

We also see him in an setting with better players, similar to what he’ll have here.

Wheatley, Fabrizio and Bell haven’t confirmed the interest in Neves yet.
Wheatley even said it’s agent talk.
Hopefully it stays as is.

the guy on ssn said Wolves want 40 million for Neves, no thanks

I’ve seen enough of him to know we should be staying away, especially when he’s probably only worth about half that price

he has very scary eyes as well, creepy looking guy

Yeah, my guess is Sky Sports are running with whatever news they’re getting, reliable or not.

I’ve been in a reflective mood this week after the dissapointment of not getting Buendia. My mood has been bolstered by the news that Xhaka looks set to leave the club. I know he divides opinion, but personally (and I have made no secret of this on this site), I’ve wanted Xhaka out of the club for a long time. I was there when he told me and other fans to fuck off when we’re trying to get him to get off the pitch quickly so we could win the game. Anyway, leaving all that aside, it looks like Xhaka is going to go this summer. Somthing that I didn’t expect and therefore an added bonus. Xhaka for me, represents the decline we have experienced over the last fews years and I will be pleased to see him gone. We should have gone for Kante and this represents the biggest failure of Wenger IMO, and the first time I questioned his judgement.

As a result I think we will have to bring in two new CM/DM players to bolster our midfield. I have been reflecting a lot about the prospect of Neves. My initial reaction was pretty underwhelmed. Seems like a very ‘safe’ transfer and nothing to get really excited about. However, the more I have thought about it, the more it makes sense. I was always impressed with Neves and Wolves’ midfield (not so much last season, but in past seasons). I also didn’t realise that Neves is only 24. He is already PL ready, and has the potential to still improve. Good all round player with good defensive abilities and good long range passing.

Lots of people have questioned the transfer fee, and I initially thought that £35/£40m was too much for a player like Neves. However, I had to remind myself that Liverpool paid £45m for Jota. This seems to be the going rate for a PL player of a certain quality.

I would personally prefer Bissouma - he remains my No.1 target for this summer. However, I do think that Neves would be a good buy. Yes, maybe a very sensible buy, but I think he would be solid and has the potential to grow and get better at Arsenal. He can come in and do a job and I’d be confident that he wouldn’t make the same number of mistakes as Xhaka. Essentially an upgrade on Xhaka!

There we go, found it. 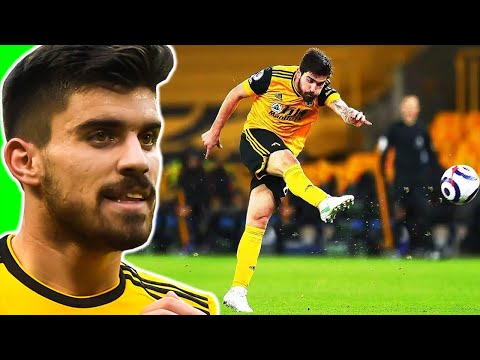 This is Neves in the Championship. This is when he was compared to Fabregas.

Looks like completely different player doesn’t he?
Not sure what happened in the past 2 seasons but his level has dropped off significantly.

Only 1 season. They had back to back 7th place finishes. Amazing for a promoted team. Then yeah they were exhausted, so clearly Neves is shit.

Now that I’m remembering your love of Championship Neves it makes your Xhaka defence all the more baffling.

Fabrizio confirming our interest in Neves.

But he says he is one of the names in the list, just like Bissouma, and there is nothing advanced.

He said he’ll reveal soon other names in the list, I assume the ones that are prioritized.

But he says he is one of the names in the list, just like Bissouma, and there is nothing advanced.

He really gives nothing regarding Arsenal. Bell >>>