But I don’t dislike England, I love the English national team. I’m just not going to overlook the cheating it justify it the same way some people are.

My only gripe is for all the people saying Denmark are robbed, there’s an equal number of people saying “we don’t care” and “other nations do it too” regarding the diving which is a total 180 on the usual attitudes people have towards diving.

England won from a penalty that was awarded directly after Sterling dived. So it’s obvious to see why Denmark fans might be frustrated. England may well have gone on to win regardless, but if I was Danish I’d be furious at that penalty decision.

Although it’s a good point on the Denmark free kick. If memory serves me right, I don’t remember thinking it was a free kick.

Denmark were diving and feigning injuries all tournament. Hojberg spent more time on the floor clutching his ankle, than he did playing football.

England just got the one decision that mattered.

But I don’t dislike England, I love the English national team. I’m just not going to overlook the cheating it justify it the same way some people are.

I wasn’t criticising you, my original comment was just wishing we scored the goals in extra time to make denmark look like the shitters they were after the 40th minute. Would’ve made the whining better, 2 1 suggests they were in the game

The free kick routine was form a ball and run into every single England player and hope for a free kick. So dumb that they got away with it

@Cristo waking up this morning 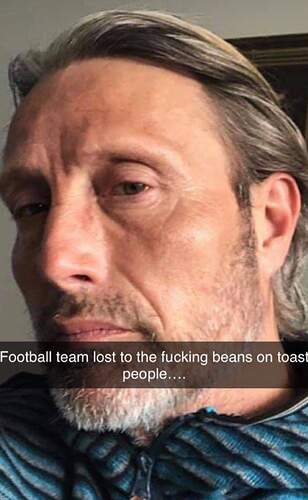 No I totally get that, I didn’t think you were criticising me. I was addressing the wider issue and using your post as a means to do that.

I guess the reality is, if England win 4-1 then the Sterling dive incident becomes 80% less important and more a case “England cheat too” but the flip side for some is that England win off an own goal and a bad penalty decision so imagine for Danish fans it’s a very bitter pill to swallow because 2-1 indicates a much closer game

Unfortunately I have to admit I was left quite disillusioned and with a sour taste in my mouth after yesterday.

Don’t get me wrong, Wembley is an incredible stadium and watching Denmark line-up in the semi-final was an incredible experience and the build-up beforehand in the Vinegar Yard with 400 other Danes was amazing.

But fuck me was I shocked and disappointed by the England fans behaviour yesterday. I’ve never been to an England game before, or Wembley for that matter, so I had an idea of what to expect but was not prepared for the amount of abuse or aggression the Danish fans were met with.

Along the Wembley Way England fans were throwing full pint tins of San Miguel at us, one of which hit a Danish girl. Another incident was when a fully grown man went up to an 11 year old boy and his mum and shouted ‘YOUR TEAM ARE SHIT!!!’ in the little boys face. When I was at Tower Bridge waiting for the tube there was a group of England fans standing a little way down from me and I said “Here’s to a good game today boys!” and gave them a thumbs up and they just told me to “Fuck off, Denmark are shit”. Before heading to the Vinegar Yard, me and some friends were stood outside The Shard waiting for some other friends, just in a good mood and happy and excited but minding ourselves and staying out of the way and it was nothing but “FUUUUCK DENMARK YOU’RE SHIT!!!” and “BOOOOOOOOO DENMARK BOOOOOOOOO”. There were England fans who snuck into the Danish section and started squaring up to Danes when we scored etc.

Really disappointed that everything I’ve read and heard about England fans was true and if not worse than I could have expected. I’ve lived in England for 17 years and I feel a great amount of love towards England and the English, but this was truly beyond the pale and I am left feeling very upset at the treatment that myself and Danish fans were subjected to. We weren’t being belligerent or aggressive, we were just laughing, in a good mood, sharing beers with people, trying to have a good time and enjoy our small country in a semi-final but for some reason that was entirely unacceptable to the England fans.

I think it hurts a bit more because I’ve lived in the UK for so long, and to see English people treating me and other Danes like that really hit a sore spot.

I will never be able to support or root for England until English fans sort their shit out and learn to behave with civility. International football tournaments are supposed to be about international fans having a party together, not throwing beer bottles at girls and screaming at children.

Nor do the Danish fans treating visiting fans like that either. I think it’s just testament to the low calibre of English fans unfortunately.

Talking about when I’ve seen arsenal away as a kid and adult. Never seen england

Yeah fair, but I find club football to be way different in that regard.

Way more tribal and aggressive, I’d definitely be expecting that sort of behaviour at Arsenal vs Spurs Chelsea vs West Ham etc. etc.

Not saying it’s OK there either, but at least there it’s more “expected”.

Yeah probably. But most of those fans were drinking all day and the game was on at 8pm, drunks are annoying and the game started late.

Yeah you’re right, they were just drunk. That excuses assaulting women and children. No harm no foul.

That all sounds horrible, but I’d be lying if I said it’s not exactly what I thought being an opposition fan in a semi final against England at Wembley would be like.

I don’t really know what foreign fans are like as a collective (clubs or nationals) but I’ve always assumed there were elements of this from all major teams but maybe not.

In terms of internationals I always think it’s sad when people boo other teams national anthems, and the “haha your team lost” kind of banter always feels in far more bad taste than it would be for clubs. I’d much rather the festival atmosphere and may the best team win kind of thing.

Didn’t excuse just saying I would have predicted that’s how it’s going to be. Semi final people been drinking all day. Precious

I highly recommend you dont got to an anthony joshua fight at wembley then.

What happens at them?!?

Its like an england away game only it feels everyones done twice the amount of coke for it.

Worse part is waiting in the queue for the tube at the end, so many mini rows and fights

Another incident was when a fully grown man went up to an 11 year old boy and his mum and shouted ‘YOUR TEAM ARE SHIT!!!’ in the little boys face.

Did anyone call him out for this behaviour? Like, if you’re one of his mates and you see him doing this you’d give the back of his head slap to tell him to knock it off