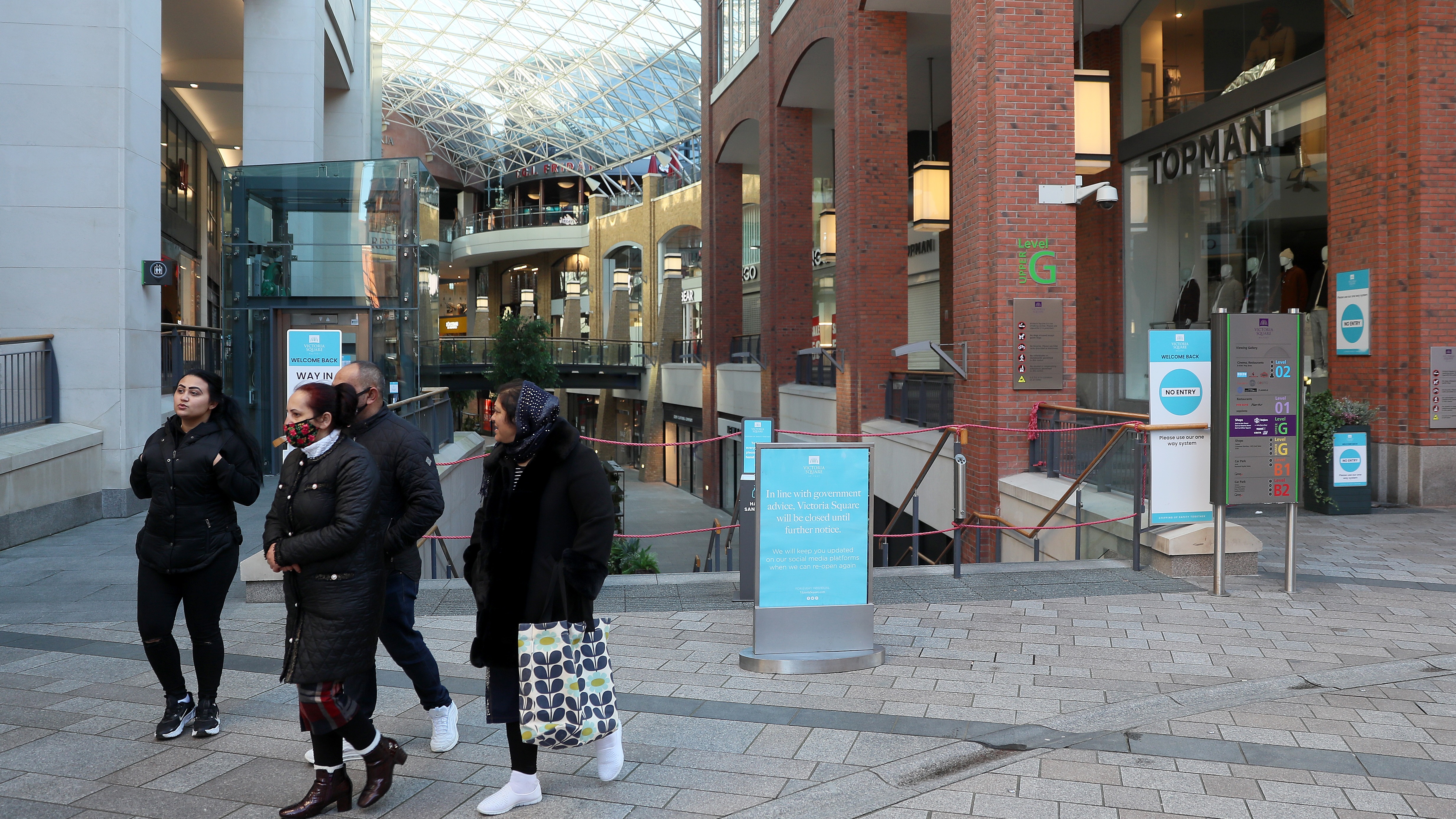 Will economy really bounce back in 12 months? The Bank of England thinks so |...

The Bank of England has published an upbeat forecast with a quick recovery expected, but challenges remain.

This should be fun…

Edit: They really need to stop using the stock market and GDP as the main ways to measure an economy.

It’s so hard to tell what will happen.

Last I saw, national savings were up 28% on last year (very good, this is where all the government borrowing is coming from) due to people having less stuff to spend money on which is good.

However, will these savings just sit in bank accounts earning no interest or will people go out and blow it on pubs, holidays, retail etc. when the country opens up again which would be good for the economy?

A lot of economists are speculating (probably rightly so) that there’ll be significant lag in the economy which means that with furlough etc. we won’t see the full extent of unemployment until Q1/Q2 this year which will have a huge effect on people’s savings, house prices, spending etc. One report was expecting house prices to fall by 14% this year after the stamp duty holiday expires.

Basically, no-one knows anything because this is a situation we haven’t experienced in 100 years and the world has changed a lot since then and there are so many variables that will affect the economy in the end.

Yeah not to mention interest rates are pretty much at a flat zero rate so the incentive there already is to spend and not save. Right now inflation is at a rate where you effectively lose money by sitting on it.

On the housing market front I am extremely intrigued to see what happens here. The stamp duty holiday really, really stimulated that market but now I fear those who are awaiting completion that may miss the March deadline could capitulate that market.

Stock markets are no tool to analyse the economy as the pandemic has shown just how disconnected the 2 are.

Yeah agreed, non-existent interest rates are prompting people to either spend their money or invest it in the stock market which is artificially inflating the stock market.

Also 2020 had the highest level of venture capital funding ever, and when you add with that the stock market, you realise that really it’s all controlled by billionaires and institutional investors and so clearly not an indicator of how your average person is doing.

The fact that house prices hit an all time high last year is also crazy to me, and several of my close friends closed on houses last year so I’m also intrigued to see what happens to the housing market in the UK when unemployment and the stamp duty holiday finally catches up with the market.

Even rental prices have fallen massively. My girlfriend and I were looking for fun this summer, and rental prices in Fulham (fucking Fulham!) were down 15-20%, it was nuts. I don’t see that getting better any time soon.

~ a #thread 👇 A startling estimate has caught the eye of economists: that London's population may have plunged by 700,000 during the pandemic. What do we know and will it spell trouble for the city's economy? @tomelleryrees takes a closer look telegraph.co.uk/business/2021/… https://t.co/0hIS2clI8R

London's population has been hit by a double whammy: office work shifting online, and native and foreign-born workers moving out 👇 The WFH revolution has tempted employees out of the capital, with many seeking cheaper rents… https://t.co/gfEy8ri4xM

How damaging these shifts are for London's economy hinges on whether workers return or have left for good. @BankofAmerica believes potential GDP growth would be cut to a meagre 0.2% – down from 0.5% in its base case scenario 👇 https://t.co/Csl5HsQQWY

There are also signs of trouble brewing in the property market. Average house prices in London rose above £500,000 for the first time in Nov, but the struggling rental market may be a better gauge of problems. Rental costs tumbled 5% year-on-year across the capital in Nov 👇 https://t.co/83aTiQNfpK 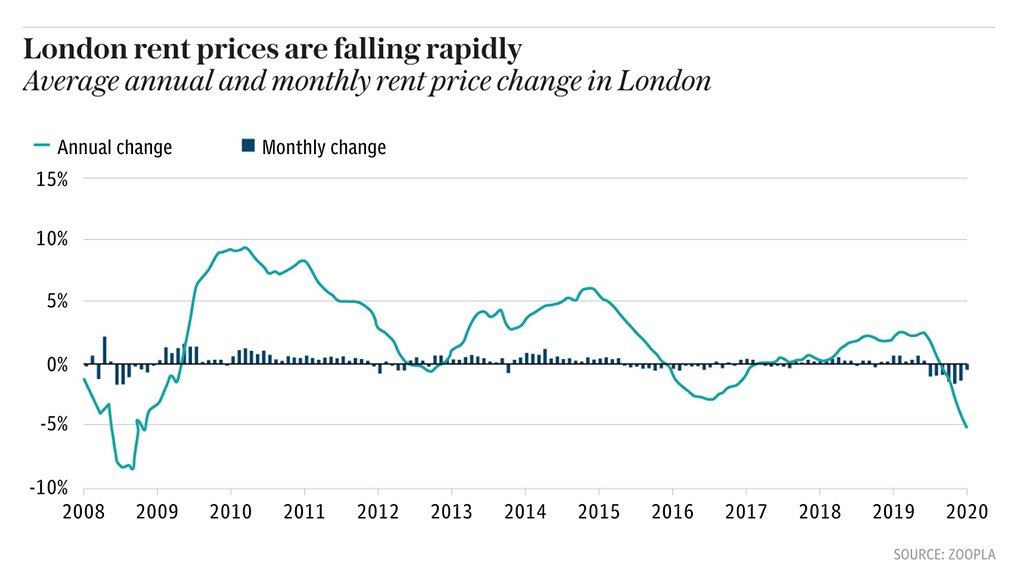 A prolonged decline wouldn't be unprecedented for the city. The last major population drop suffered by London was in the decades after the Second World War, driven by old industries falling away and government policy… https://t.co/BJQPi9aSIh 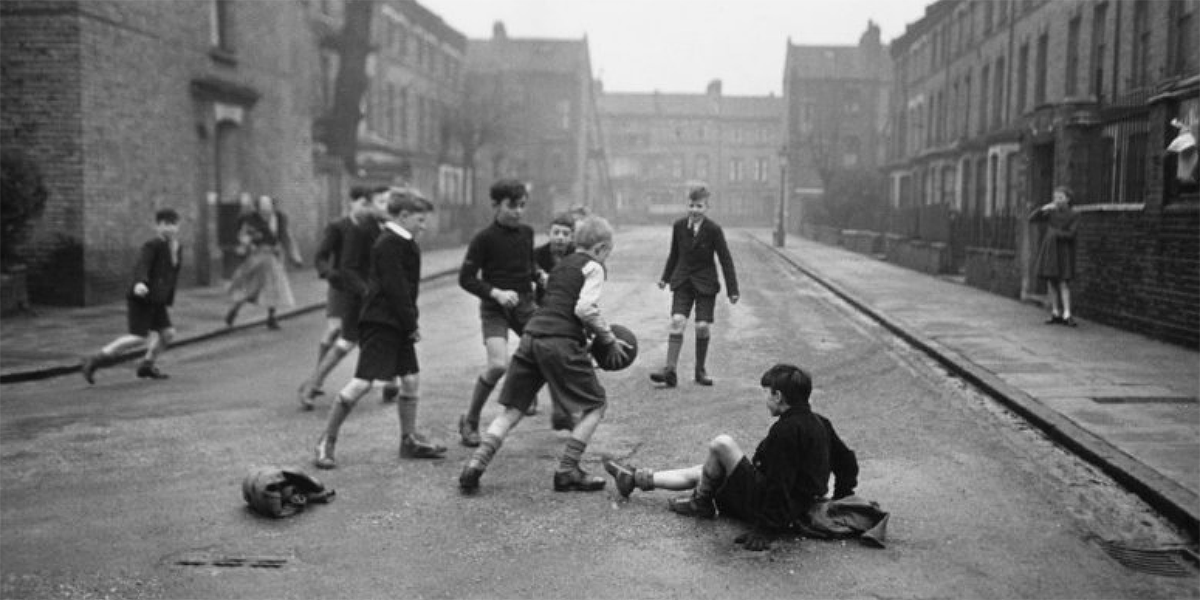 The difference this time, however, is the immediacy of the population shock. Economists are still unsure how many workers will flood back to London once the pandemic has been brought under control…

A sustained decline would dent demand for services in the city and hit retail, restaurants, bars and clubs 👇 But it could also ease pressure on transport and housing… https://t.co/323rVnmOW4 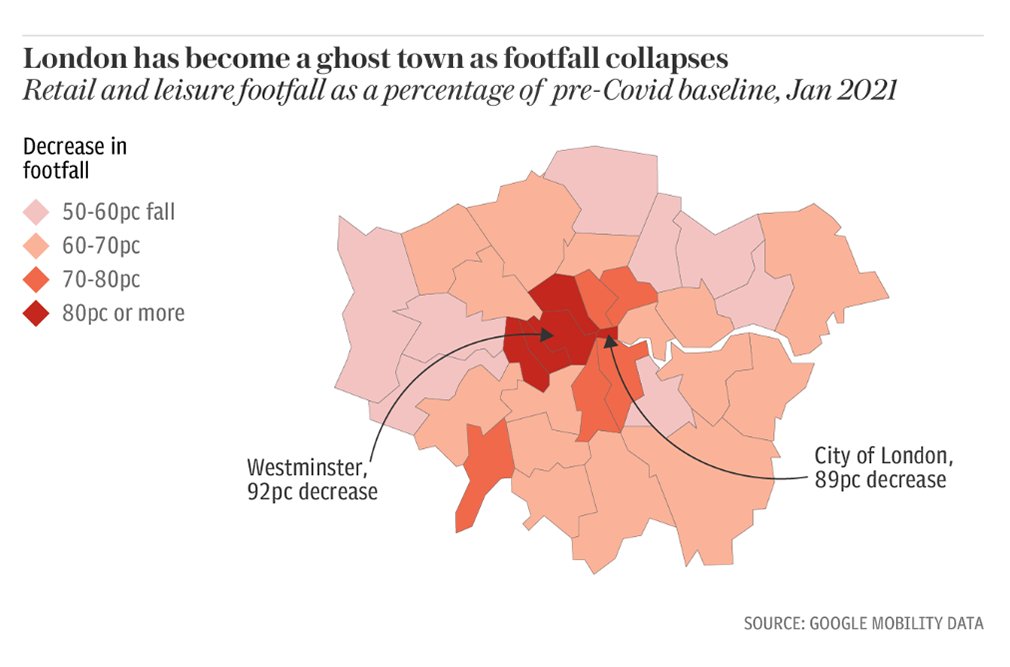 Even once the pandemic has ended for the capital, London's population bust may be one of the longest lasting legacies from the crisis. Read more in @tomelleryrees' feature telegraph.co.uk/business/2021/…
3 Likes
Cristo 6 February 2021 07:30 #7

My girlfriend and I were very, very close to not renewing our lease here in London and moving back to Bath last June and I’d have been totally OK with it.

I even asked my work if moving forward after the pandemic I could work from home 2-3 days a week to make the move happen and they were pretty receptive to it.

They should do. Competition amongst employers to attract the best talent will mean you have to offer the same perks if the company across the road are doing it!

The size of the economy shrank by 9.9% in 2020, the largest annual fall on record, official figures show.