The most offensive thing about that comment is that most of those strippers have horrible fake tits. I’m taking issue on the grounds of taste rather than offence.

Lols aside, well jealous of you watching this through for the first time, such an incredible show. Enjoy mate.

The most offensive thing about that comment is that most of those strippers have horrible fake tits. I’m taking issue on the grounds of taste rather than offence.

In any case I really miss 80s and 90s tv and film where they just got boobs out for the sake of boobs.

But yeah this is a fantastic show. So compelling and immersive to watch and yet still so easy to watch. Rare to find a show like this.

are all the strippers at Bada Bing

There is a great story involving Ralph Cifereto (sp?) and one of the strippers as the series progresses. 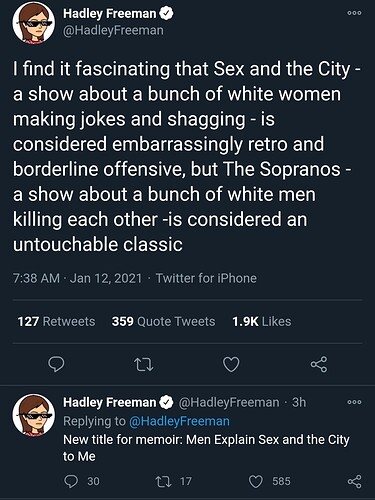 New title for memoir: I put out intentionally provocative shit takes and pretend to be outraged about men replying to me.

I noticed Barney Ronay (Guardian Sports journo) replied to disagree, and she engaged with him as if his opinion counted, despite him being a man???

Its almost as if she doesn’t even believe in her second tweet, as she’s not calling Barney out for mansplaining Carrie Bradshaw… 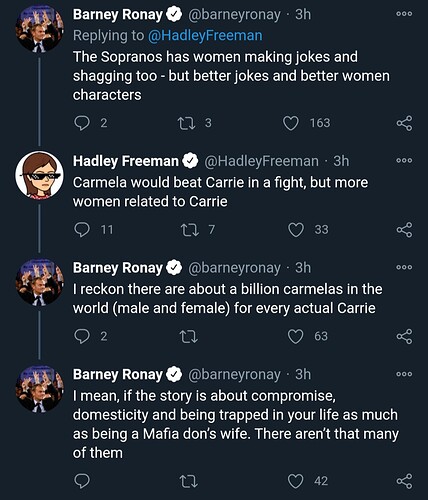 I’ve got a lot of time for women when they complain about “mansplaining” if we’re talking about period poverty, or some such issue where there clearly is no call for men to wade in like they are experts when they aren’t, but we’re critiquing two nineties HBO shows here ffs and she comes across like she hasn’t got a solitary fucking clue about The Sopranos and the themes it explores. Its a far deeper show than SATC, and I have seen both in their entirety, I actually quite enjoyed SATC for what it is lol

BTW, my gf sent me this cos its an awful take, just so happens this thread is also active atm so figured I’d share lol

I don’t think I’ve ever seen anyone describe Sex and The City as embarrassingly retro and offensive?!

I’ve only ever seen it heralded as some sort of symbol of female empowerment and feminism so I don’t know where’s she getting this from.

You’re right, definitely a shit take from someone who’s bored and wants to stir shit to get some attention. The Sopranos also doesn’t portray the guys in the show in a good light when they’re shagging prostitutes compared to SATC make all the women look like sexually empowered deities for shagging men.

It’s got the extent where any debate with a female can be shutdown with ‘don’t mansplain to me’ in order to shut down any conversation. In short a cunts trick

I’ve only ever seen it heralded as some sort of symbol of female empowerment and feminism so I don’t know where’s she getting this from.

I think it was hailed as such initially, and people still recognise that it had that impact at the time, saying it broke the mould and paved the way for other shows to follow. It was unashamed in discussing sex etc, and it was groundbreaking to have a show do that from a woman’s perspective back then.

I think when viewed now it doesn’t have that same impact, because twenty odd years on it isn’t taboo in the same way to have women openly discussing sex, so it doesn’t quite have that same feminist impact. Through a 2020 feminist lens, they basically spend all their time talking about men as if there’s nothing else that matters as much, and they’re also four wealthy white women, so the show’s feminism isn’t intersectional and says little about the lives of most women. So in some respects, I have seen people reappraise the show, the above is the gist of bits I’ve read from feminists. I think its also sometimes more harshly assessed after the abomination which was the second SATC film, which really did seem totally tone deaf on every level, and really did make the show look very dated.

Thats how my gf views it, but she was also like, “its ok to just say ‘I like this show’, you don’t have to defend it as a timeless political statement thats as relevant now as it once was. Its OK to just like SATC without drawing stupid comparisons to much better shows like Sopranos”

Exactly, which is why the show isn’t dated like SATC is. Back when it aired we weren’t meant to view these guys as being good, they were pieces of shit then and they’re still pieces of shit through a modern, 2020 lens.

Delivered here yesterday, such a cool name if you’re a fan of the show…

Is there a letter in front of Soprano or just a number?