The Best Defender of All Time

With Holiday season approaching and most of us in lockdown. Let’s have another “All Time Best” thread to spend our time on frivolous footballing matters instead of netflix.

Who is OA’s pick to be heralded as the Best Defender of All Time in the History of Football?

Der Kaiser always gets number 1 in these types of votes doesn’t he?

I chose for Paola Maldini, but that is mostly because I remember as a child I really liked the Milan defenders.

It’s very hard to judge them actually as all played in different times and under different circumstances.

Der Kaiser always gets number 1 in these types of votes doesn’t he?

Well I don’t know, I know he was good, but was he the best ever? On what merit?

Yeah usually. That’s why it’s hard to vote on these kind of things because a lot of us have never seen him play and clips are sketchy.

I would normally say Maldini or Baresi.

Can’t say I’ve seen him play, just that the general consensus seems to be him at number 1 whenever websites, polls etc do top 50 players etc

I saw Beckenbauer play, he was wonderful, the first ball playing defender I can remember. At the time defending was just tackling and clearing the danger, then all of a sudden this guy comes along, and DRIBBLES out from the back… Unheard of!
Brilliant defender, brilliant footballer, brilliant captain… I love Big Tone, immensely, but Beckenbauer will always be the best of the best.

Its impossible to say as I never had the chance to see all of them in their prime. I would normally say Maldini, but even then I probably didn’t see him at his real peak!

Always loved Puyol too, and would put him above those who I have seen (Pique, Ramos etc)

In my lifetime I have to pick Nesta. I don’t I’ve ever seen a more complete defender than him. He had everything the modern ball playing CB has and he could also defend.

There’s never been a more elegant tackler than him too. Some of his slide tackles were art.

I’ll never forget his duels with peak Messi about 10 years ago too. They were just ridiculous. At 35/36 he gave Messi hell.

I’d probably shoot for Maldini as being the best to ever do it but in my lifetime - I can’t look past Nesta.

Yeah that’s a good point. Nesta was stunning against him in the 2011/12 group stage. That was pretty much peak Messi too which gives an image of how good Nesta must have been at his peak.

Thinking specifically about Italian defenders I can remember I’m not sure too sure where I would place Cannavaro. I can’t say he impressed me too much when he was at Madrid but that was towards the end of his career.

I think Cannavaro had his last hurrah at the World Cup in 2006 and gave everything for Italy.

I’d also say that his first season at Madrid was good. He was regarded well and very consistent but his drop off was extremely dramatic and he became completely useless after that.

Sadly we didn’t get to see him at a club like Madrid until he was already in his mid 30s anyway.

At his peak, I think he was incredible. But I think his fall of was extreme and almost overnight. He went and retired off in the Arab world and apparently he was horrendous out there too. His legs just gave up.

Decided to go for someone who played at least partially in my era, who I watched play multiple times, so it had to be Maldini.

I like that you have included Stam here @Forever, not that we are talking PL only here, but I always think he gets overlooked when people talk best centre backs of the PL era and mention Terry, Ferdinand, Vidic, Campbell etc

What a fucking player, just impeccable, and actually seriously good with the ball at his feet, and clinical in the air, scored so many headed goals for us. Him, Nesta, Maldini, Cafu is the best defense I’ve seen in my adult lifetime. Obviously Sacchi’s Milan is above that, but I’d definitely suggest those 4 for the second best back 4 ever. Milan have honestly been spoilt in that regard.

Just rewatched Milan 3-1 Juve from 2006 Serie A, and Stam is absolutely everywhere. You just don’t get past him, then if you do, Nesta’s ready with a sliding tackle/perfectly positioned for an interception.

I’ve gone for Baresi, I didn’t see too much of him, and you can make anyone look good on youtube sure, but there are hours upon hours of footage of him being the best player on the pitch. He was small (5’7.5"), seriously fast, tenacious and although not that stocky, I’d say almost as strong as Maradona. He was never out of place, and actually great at bringing the ball forward and picking a perfect pass too. He’d give Ibra a run for his money at getting balls in the air, just because of how he used his body and placed himself.

@SRCJJ yeah that world cup is Canna’s. He’ll always be a hero to me for that, his decline was rapid because he relied a lot on his speed, like Baresi, but unlike Baresi, he lost that and somehow couldn’t maintain his standard.

Great thread @Forever, actually prefer most on this list to some of the best attackers of all time.

I like that you have included Stam here @Forever, not that we are talking PL only here, but I always think he gets overlooked when people talk best centre backs of the PL era and mention Terry, Ferdinand, Vidic, Campbell etc

I agree with you that he seems to be underrated amongst PL defender greats. Would it be fair to say that players like Ferdinand and Vidic perhaps were even inspired by Stam?

Great thread @Forever, actually prefer most on this list to some of the best attackers of all time.

Thanks! It is a pity that the majority of people will overlook the class of an elite defender. Unfortunately, scoring goals will always be more glamourous.

That is why I had hoped for Van Dyk to win the Ballon D’Or in that great season he had. But, of course it went to another forward instead.

If I remember correctly only about 2 defenders were player of the year in the last 30 years?

Like @SRCJJ , I had to go for Nesta mostly based on who I can remember really watching the most in my lifetime.

He really was incredible, and those games against Messi really stand out as well I have to be honest.

I also think he was so iconic, with his hairstyle and that hairband he always wore. Feels like he never really lost a step even well into his 30s. 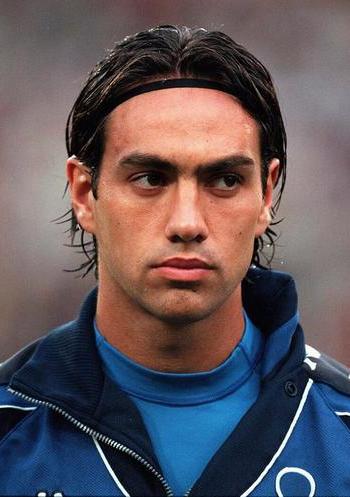 It looks like the votes have been reset going by my screen, is anyone else getting that error? i’ve had to vote again, only my vote for baresi and then @DavidHillier’s vote for tony adams is there…

@Forever it would’ve irked me a little to see Van Dijk win it, only because he’s just not on the level of many better defenders who got overlooked for it in their prime, and an award like that would make people put him on a similar level/above half of this list…

The maths checks out close the poll now.

I just noticed - maybe because I added another option as @Stroller missed some in the other thread… sorry lads. We need to put in our votes again!

Now I know never to make any edits after voting commences.

@Forever it would’ve irked me a little to see Van Dijk win it, only because he’s just not on the level of many better defenders who got overlooked for it in their prime, and an award like that would make people put him on a similar level/above half of this list…

Yeah, I don’t think he is that level of the defenders mentioned in this thread. But he did have an outstanding season with Liverpool winning the league and the CL the year before. I think they had the best defence as well that year?

Who else of the current defenders would you say would be able to win a Ballon D’Or?

Well like @Stroller says the standards are so fucking low now. I’d give it to Van Dijk last season before anyone else, but then I’d have to put an asterisk that it’s just not an achievement these days because there’s not much competition.