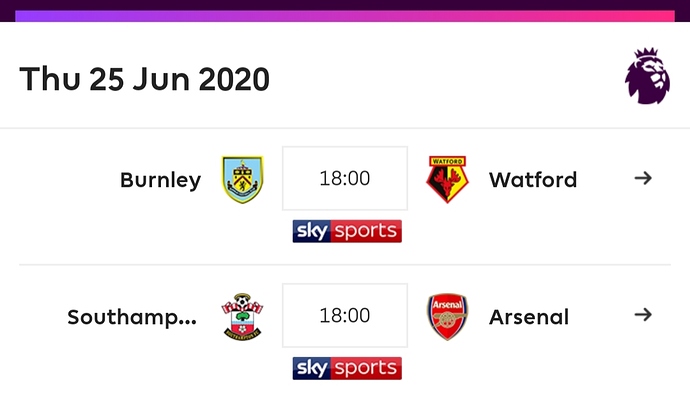 Southampton have a great away record. Won most of their points on the road.

Ings hatrick and at least another injury.

Can’t wait for this match!!!

We are used to Thursday night football now tho so maybe we could get a win?

We won’t be having it next season

I wanted to write something about this game and my predictions. After writing a few lines I deleted it and realised that I don’t have the energy. I felt drained, stomped and beaten by this team before the Corona break. Was starting to get a little excited before the restart though, but now I’m actually worse off, feeling depressed for real. Sorry for all the doom and gloom but I can’t find one single positive thing to say about this team. None. We’ve got 40 points, so we are safe from relegation. Let’s just send out our youth team and transfer list the rest.

Won’t even be surprising anymore if we lost to Southampton as well. We are no more clear favourites in any of the games we play, which clearly indicates to us being a bang average midtable team. Hey, atleast Southampton too won’t be doing the double over us even if they win, as we fought well to rescue a point against them in injury time in the reverse fixture. So there’s a silver lining, if you could call it one. How far have we fallen, man.

I’d be happy to see our team chase everything and close down Southampton at every opportunity even if they come off fucked they shouldn’t, but there must be some reason they play so slow?

We’ve only done that once under Arteta and that was on his mamagerial debut v Chelsea. We did OK, but for a young team, we were shagged out after an hour, which was alarming.

To think we might get anything out of an away game anymore is bordering delusional IMO. We don’t have the collective quality, determination, hunger and knowhow to do anything away from home. And in Arteta, we have a coach who probably is beginning to realize how deep the shit he is in.

What’s sad is that I’m still going to watch the game, knowing fully well that it’s only going to make me want to pull my hair out.

Well I take your point but that says something about our energy levels as other teams close us down at every opportunity. I’m not a fan of the goalkeeper passing the ball out from the back for us as a slow team this is adding more pressure near our goal. If we played a 4-4-2 formation and went back to goal kick we could have 6 players trying win the ball in the opposition’s half and it would force the opposition’s forwards to retreat back away from our goal…just a thought

I’m not a fan of the goalkeeper passing the ball out from the back for us as a slow team this is adding more pressure near our goal.

100%. I don’t know why we insist on this sweeper keeper bullshit if it’s only inviting pressure. We’re meant to be changing the way we do things at the other end of the field, not for the worse at the defensive end.

I also take your point about more of their players being in our half during playing out of the back. I’d like to extend this to opposition corners as well. If we have a pacey player like Pepe or Aubameyang standing in and around the centre circle, that would make the opposition think twice about sending their big defenders up for the corner.

I can see this being a 3-0 defeat. Then an fa cup exit a few days later with Arteta coming in for serious criticism.

Then an fa cup exit

This would totally fck me off.

I always said I’d follow the FA Cup games with a more concerted interest should the football ever return.

A defeat at Bramall Lane would leave me apoplectic.

So how will you feel a week later when we lose to Wolves then?

Wolves are a piece of shit club anyway from the armpit of the world. I can only wish famine and pestilence upon them

You just know Shane Long is scoring if he gets on the pitch. Guaranteed.