Could be an opportunity for Southampton, Everton only won like 1 in 15 and beat us and what was Brighton’s run before visiting the Emirates?

Palace hadn’t won at home in a fair while brvote destroying us either I’m pretty sure.

I think we’ll win this. And we have Chelsea a few days later - which I also see us getting something out of given Chelsea’s tough week.

Chelsea is the toughest game we have left, apart from away to spurs but Chelsea are pretty much guaranteed third place and have got far more important cup games coming up so they might put out a slightly weakened team against us.

We should be beating teams like Southampton, although we should have beaten both Crystal Palace and Brighton so it looks like Arteta has blown it again.
Hasenhuttl won’t be worried about playing us and he will be going for the win.

Walking straight back into this fucking meme 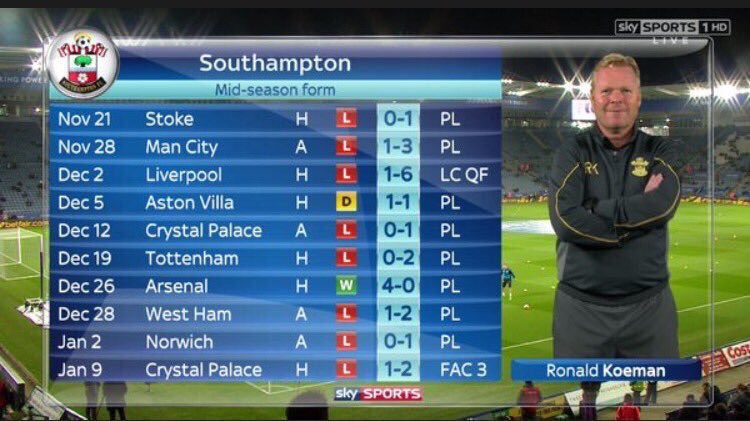 Arteta has to be prepared to make adjustments for this game even if it sacrifices his ideas in the short term. We clearly don’t have the personnel to play the football he needs now our only good central midfielder is out and our left back is injured for the 40th time.

Would probably be better if we just focused on quick transitions in this game and to use the pace of Martinelli, Saka, Pepe etc to give Southampton issues when we break with the ball. We need a really high energy, quick pressing game too otherwise we’ll end up just getting harried off the ball and won’t get it back

If he didn’t see that before the Brighton match I’m not sure he’s suddenly going to see it now.

Pretty much what I was getting at 2 posts above.

Anyways even if we win this one we won’t do enough vs Chelsea, United, West Ham and Spurs to get 4th.

A month ago I thought we were in a relatively good spot needing approximately 6 or 7 wins in 12 matches to get 4th, but 3 points from our last 12 has left us in the mud.

Two pathetic teams going at it

On a bit of an aside, but how lovely would it be to see them lift the Cup in May

I can’t see them beating City in the final, though (they’ve taken 4 points off City this season and City probably owe them one)

Won’t be playing city though

Seems like a great place to watch a match.

They used to have a satellite club in Baltimore years and years ago.

Won’t be playing city though

If he could not see it, which means he is so one dimensional and not flexible.
Sign of being a bad manager.

It’s all guesswork right? But if you want to be charitable maybe he genuinely thinks so much of Xhaka that he was comfortable having him shuffle between LB and midfield. The formation doesn’t change, Nuno doesn’t play, Sambi can have someone hold his hand, it looks pretty good.

yes, we are all guessing here

Although you also thought they’d smash em in the league game at the Etihad Dave.

Better than thinking Liverpool will smash everyone.

Think I thought that game could go either way, panned out as such entertaining 2-2 draw between the 2 best sides in the world.

Liverpool were fortunate to get a draw. City bossed them.

I agree City should have taken the 3 points. But Liverpool found a way to take something which also deserves credit, responding twice after going behind away from home.