Apart from Ronaldo, I don’t think any of those players hold a candle to Messi and Ronaldo, as great as they were.

Theres certainly far more contenders with the likes of Laudrup, Stoichkov, Van Basten and Guillit all around in that era.

Also think you’re doing a disservice to the modern era. You list all these players, but there were/are players like Suarez providing that “competition” to Messi and Ronaldo, and I think he’s basically as good as anyone you’ve listed.

Well on individual talent I can see your argument and Suarez is a fair shout. I defo see all three in contention but think the 90s players are overlooked on account of the sheer dominance of the teams the current three play for.
Think in terms this inflates there natural talent into huge goal stats. Without dominating because of stiffer competition in CL in the 90s I think there dominant impact is halved.

I appreciate your perspective man, and am only disagreeing gently, don’t wanna strongly say you’re flat out wrong as such cos I was born in 1990 haha, so my insights realistically aren’t going to be as informed as yours and those of some others.

Comparing players from different eras is really difficult anyway, so many variable and factors that make it hard to draw fair comparisons.

I’d put Barnes, Hoddle and Waddle right up there with the best attacking midfielders in the world during the late 80s-early 90s period.

But there’s levels here so IMO:

Not sure where I’d put the some centre forwards of the era, I suppose this is a attacking mids/ no10s/ + R9/Romario. Not sure where to put Linekar, Shearer, Stoichkov, Vieiri, Raul and I’m sure I forgot a few

I would only put Ronaldo on par with Messi and CR7, would’ve been amazing to see those three in the same league, and based on his one season at Barca it would’ve been scary seeing Ronaldo and Messi in the same team

I do also think that players like Aguero, De Bruyne, Iniesta etc are undervalued slightly purely because of the ridiculous stats that Messi and CR7 produce, they’ve inflated what we expect from elite footballers.

Well tbf its not an exact science and your points are good.

1 thing about attackers in the 90s is you got kicked far more often than they do now. Back then if a player wanted to dribble they had to ride tackles at times.

Defending in the 90s was of a far higher caliber. 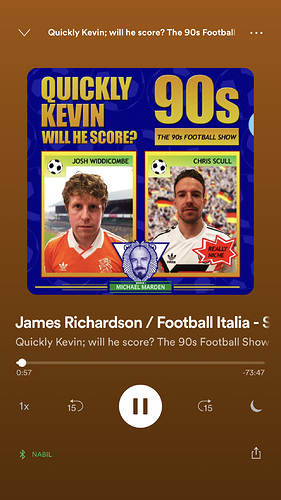 @JakeyBoy let’s see what it’s about.

Defending in the 90s was of a far higher caliber.

Yeah I feel this is true, so it would have been interesting to see Messi and Ronaldo against this calibre of defenders. They’d still have smashed it generally because they are all time greats, but would be interesting to see if their numbers would still have been so much better than the great strikers of the nineties had they played in the same era.

I guess the more we talk about it the clearer it becomes that there’ll never be a definitive answer, too many different variables at play.

Way too many variables. From formations, styles of play, culture of the sport, calibre of players in different positions. There is just too much to consider in order for any of us to really make a judgment on the kinds of numbers they’d put up.

I have a bit of a problem with these kinds of statements.

It’s a bit like when people say no one defends like 90’s NBA anymore. I think a pretty similar/parallel evolution occurred in both sports.

While I’m a bit conflicted, because I feel like people like Nesta, Cafu, etc. were simply some of the best defenders of all time, I also think it’s highly unlikely that great defenders nowadays like van Dijk, Piqué, Puyol, Chiellini etc. wouldn’t have had just as much success then. Defenders are asked to do much more today, football attacking is more advanced (especially wrt pressing, which makes the requirements to be a defender much more exigent in a way; you wonder if certain CBs of the past who weren’t great on the ball would even make it in today’s game), technology and refereeing favours attacking, etc.

Basically, the more scientifically rigorous part of my brain suggests to me that these kind of claims are likely false.

Yes, Messi and Ronaldo produce in a more favourable offensive climate than great forwards of the past. They also helped make that climate themselves, they’ve changed the sport themselves. People in the 90s did get close to Messi/Ronaldo level numbers on a few occasions; Romario in one season for Barça, Ronaldo…that tells me that if they were out of this world talents like Messi or Ronaldo (or stayed fit in the case of fat Ronald), they could’ve maintained something similar wrt to the overall goal-scoring environment. I mean, I don’t think the difference between Henry level numbers and Ronaldo/Messi level numbers 3 years later is just the goal-scoring environment; I think we’re talking about players who took dominance to a new level.

Ronaldo’s numbers come with an asterisk because, aside from not being nearly as good as Messi’s when you factor in creativity, pure scorers have had goal-scoring seasons that look pretty much just like his if you adjust for goal-scoring environment. Ronaldo’s great achievement really comes in the consistency of that excellence. That’s why I always argue that he belongs more in the discussion with fat Ronaldo, di Stéfano, Laudrup, Zidane, etc. etc. among the greats of the past, than he does in the discussion with Messi and maybe Pele and Maradona. The issue with Maradona is at club level Messi’s career is simply better.

In short, I don’t really think there’s any legitimate discussion to be had to discount Messi’s greatness. He’s the best ever or 1b with Pele or Maradona at worst.

These articles come out every now and then with someone with a new data model to analyse Messi and Ronaldo’s contributions. While they always come out miles ahead of everyone in whatever new model it is, Messi always comes out miles ahead of the guy who’s miles ahead of everyone else (Ronaldo), in his own category. (In this study, they use a big data model to obtain a number for Value of All Actions according to Estimated Probability–basically trying to calculate the value added of each intervention on the pitch, as I understand it–and Messi comes out as 1.21 to Ronaldo’s 0.61.)

He’s quite simply an aberration and I get a bit tired of people trying to take away from such, or use specious arguments about the past to discount him. If you have a different criteria that involves impact in your own nation, national team level, weighting these kind of things arbitrarily higher, sure, you can make a case against him with Maradona, but if you’re criteria is just who is the player who’s been best at the sport and repeated it for a few years at the highest level, it really only leads to one end.

All good points but one thing that you can never factor in on these discussions and can’t be measured in data leadership and presence.
Now both have a lot of this but Cruyff, Maradona, Pele and Platini I’d suggest absorb that to a greater level. In fact they embrace pressure better. It’s a slight sidetrack to your argument but an important one for me.
Pound for pound week in week out the consistency of Messi is the most remarkable phenomenon I’ve witnessed but this other factor puts these players in direct competition for who rates higher for me. 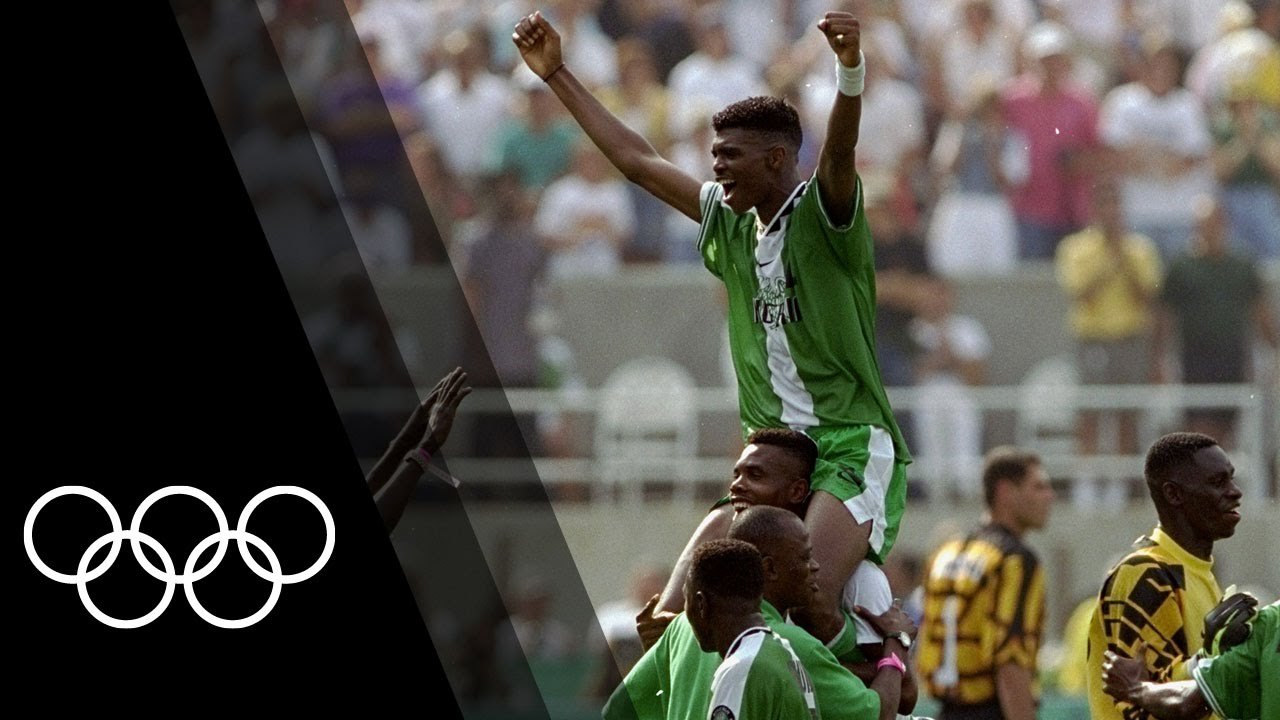 Here is a great moment of the 90s era. African football winning an international tournament. The 90s introduced African talent to European football and added and enriched the game for everyone.

The issue with Maradona is at club level Messi’s career is simply better.

I agree with most of what you said and it’s clear Messi and Ronaldo are clearly the best, with Messi probably the better of them.

But I think Maradonna was a more influential player.
He went to Napoli, who were a mid table club, and while he was there they won the Series A twice and were also runners up.
After he left they dropped down the table again.

Messi and Ronaldo play at the biggest and best clubs so although it’s probably more difficult to stand out, playing alongside the best players in Europe, which they have, both Barcelona and Real Madrid would have been title contenders anyway.

At Napoli Maradonna was a stand out player and was clearly the difference between mid table and success.
He also repeated this for Argentina.

Thing is that was also a feature of the times. Medium sized clubs could make a great signing like Maradona and battle it out with the big boys. There was more parity. Football just isn’t like that these days.

At Napoli Maradonna was a stand out player and was clearly the difference between mid table and success.

Should watch his film if you haven’t already done so. It’s amazing the impact he had on the club and such an ordinary side.

You have just lessened Messi case there mate.

I don’t think so, because I have no doubt if you put Messi in late 80s Napoli he does the same for him.

The national team thing, I just can’t take too seriously, given how fickle cup competitions are, and given how much of a mess the AFA has been in his time…I mean, he had fucking Maradona as his manager in 2010. Aside from that, just think how different the narrative would be if Higuaín puts away that chance and Argentina win 1-0…no one would care that Messi wasn’t particularly dominant in that game, just as no one cares that Ronaldo wasn’t part of Portugal’s final victory nor was Portugal good at all in that tournament. To think that such fine margins are the difference between Messi’s resume being complete and people being able to say he made the big difference on the national team level, makes it hard for me to take seriously that as a real differentiator.

Sorry I think your being to dismissive of the task and achievements of Maradona. Your comment on the level playing field of clubs was easier to bridge. Although there’s merit in some of that argument the level Napoli were at was way off.
Your also forgetting here that this is the top league and one of the most competitive ones of all time at this moment in the game.
I have no doubt Messi had the talent to walk into any of them sides but not sure him or any other player had the temperament to embrace the pressure of that challenge. It was a unique situation culturally and one he was made for. It was far from guaranteed it would go so well.

This international argument also falls short. The difference between 86 and 14 is huge as well.
Maradona lead an ordinary team to ultimate glory. He scored two massive goals and delivered the pass that won the trophy in the moment of need.
Your comparison is way off and this thing of cup luck has become a bit of new thing with people.
Messi himself has had some of his biggest moments in the CL and there elevated because of the moment/trophy.