Yea no matter how much good he does if he doesn’t take on certain opportunities people are gonna hate on him.

Bergy knew the difference. Percentage plays are all well and good but you just gotta take some things on. Bergkamp shoots 10/10 in that position.

Think he was just shell-shocked.

It had been a while since he saw a #9, certainly the Arsenal #9 move like that and set him up.

Id actually like to get these stats on the refs each week. Be substantially higher than the players by some distance.

Id actually like to get these stats on the refs each week. Be substantially higher than the players by some distance.

Why is Ozil comparison linked with attitude, and not with the style of play?

Seems a pretty apt comparison to me. Creative players, in an advanced role, who should be taking their chances when presented but tend to go missing in a game dictated by physicality.

Why is Ozil comparison linked with attitude

Because it is. You’re gonna say someone is like Ozil, thoughts are gonna go there.

Seems a pretty apt comparison to me.

Although Ozil was a far superior player

It shouldn’t be. Ozil was with us for 8 seasons and he should be remembered for 5 seasons where he was world-class for us.

Odegaard should be flattered to be compared to Ozil and work on what Ozil was class at & avoid what Ozil did wrong.

He’s truly becoming the new Ozil. He also used to top those distance covered stats, he also went missing in certain away games, he also was guilty of being a bit too pass happy when the shot was on.
We finally replaced him.

No way. Ode put in a great defensive shift against Palace.

Wouldn’t say that, was involved in all of our pressing as well as getting to press more and push up.

I was not saying he played “terrible” but subpar is subpar.
He was the #10 in the game, not #8 or #6
Need more contribution from the attacking side, hope he will do better and adapt to the new tactics soon.

I agree with that totally 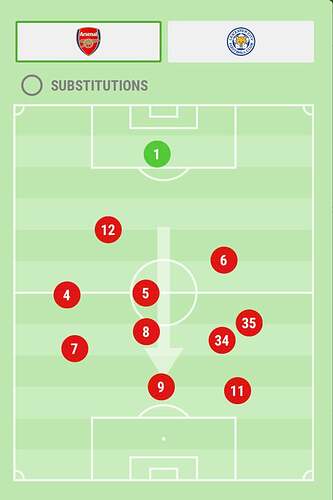 Really glad we got Vieira. Last time Odegaard lost his spot was to Lacazette for a couple of games. Odegaard came back into the team shortly after that and was playing some of his best football ever.

We do need more competitiveness into the side to maintain this level, especially when we start playing 2 times every week.

Hasn’t done enough for me in the opening two games. He put a good shift in against Palace but his offensive game is not looking as sharp as it was last season. Hope the armband isn’t weighing him down in some weird way.

Agree. Also, the armband shouldnt be a guaranteed place in the starting 11. If he continues this form Arteta should spice it up with Smith or Fabio in that no10 spot.

I think we a lot of our play is currently going down the left with Zinchenko-Xhaka-Marti/Jesus. Last season we pretty much had one creative outlet in Odegaard so it pumped up his numbers as he was all we had to rely on.

I think he’s likely going to be absolutely fine this season he had the perfect technical quality for the team so you pretty much never have to worry about him being in the long run.

Still surprised at the choice, it’s a huge task for a player of his age never mind one that’s been officially at the club for one full season, two if we count the loan.

I gather he accepts Arteta’s every word and works hard so he’s setting a good example but I think it’s going to be tough for him for a while.

Gabriel would’ve been my choice for now, even though he’s only been here an extra year. Xhaka would actually be the best option but doubt we go back there officially after his previous stint.

All it is is that Martinelli has stepped up his game, Jesus is a level above and Zinchenko boosts that left hand side so much that Odegaard and Saka aren’t single-handedly carrying the team like they did last season.

Well atleast we know this team can rely on multiple players even if the usual contributors have a poor game.