Best not to touch officials full stop, but if I were a player I’d be even more careful not to touch a female official. I don’t think it’s a great look and also just opens you up for a lot of criticism.

Dont think what he did was all that bad, but best to just avoid the situation entirely and keep hands to yourself.

My impression of it even though not sure of his intention was it looked patronising.
Think if there was a crowd her annoyance would of been heightened.
Can be reprimanded in the workplace for that gesture and wouldn’t like too see it again.
Think it should be debated a bit this week making sure it doesn’t happen again.

What do people think on the Aguero incident at the weekend ?

Mountain of a molehill. He barely touched her and it wasn’t innapropriate at all. You’ve seen this sort of friendly interaction between officials and players many times before. Because it’s a female suddenly its blown up, sad.

I agree the only reason we are talking about it is because of her gender, and that’s probably the only thing wrong about the entire situation. She’s great at what she does and doesn’t get enough recognition, we need more capable officials in the EPL because it’s ruining the sport. We have cunts who can’t even use a monitor and replay to make the right decision.

I really don’t care whether it’s a man, woman or golden retriever making the calls as long as they start getting it right more consistently.

Everyone online keeps saying he grabs her by the neck in a show of masculine dominance and intimidation over her but all I’m seeing is a quick arm around the shoulder??

But yeah in this day and age just never touch anyone ever, such a Pandora’s box of shit waiting to happen.

If he’d done it to a male official no one would even have mentioned it.

I think she should have gone to ground. There was contact so she would have been justified.

I still think there was a degree of patronising in the gesture that was a poor look.

I think she should have gone to ground.

I bet you do

What do people think on the Aguero incident at the weekend ?

Mountain of a molehill. He barely touched her and it wasn’t innapropriate at all. You’ve seen this sort of friendly interaction between officials and players many times before. Because it’s a female suddenly its blown up, sad.

If a bloke does that to another bloke in an office environment, it’s probably not a big deal. However, a male doing that to a female colleague is a different thing altogether.

That’s kind of the point - woman haven’t been in the men’s game for very long. It’s a boy’s club through and through. There needs to be boundaries and although it was a seemingly minor incident, just because male officials don’t have an issue with it, doesn’t mean that it’s appropriate for female officials to have somebody put their hands on them.

It just didn’t sit right with me but I guess if she genuinely doesn’t have a problem with it then case closed. Fighting a battle on her behalf and she might have not given a fuck.

You’ve seen this sort of friendly interaction between officials and players many times before.

Have we?
I really don’t recall a single incident when a player grabbed a male official around his neck.
I don’t think I would even deem it a friendly gesture.

Don’t touch the official, regardless of their gender.

Stop hyping it up. It was a friendly gesture. Making is sound like he rung her round the neck. 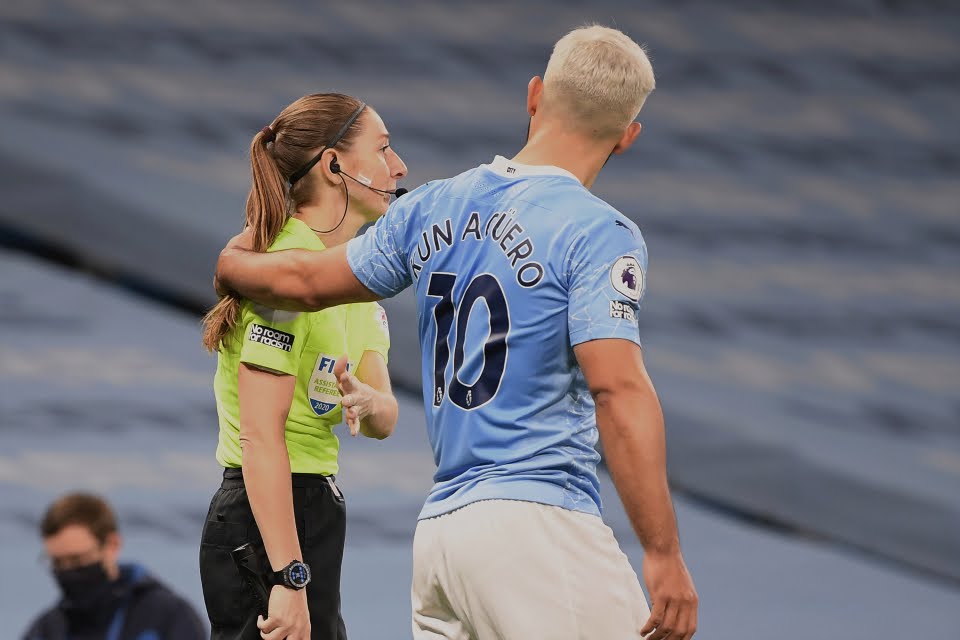 Let me be clear, I am not suggesting a ban or anything.
Mere warning and adherence to general protocol of maintaining professional boundary.

When you used see Man U players under Ferguson getting right in the faces of the officials, screaming in their faces, then look at this friendly hand on the shoulder, there is no comparison.

There should be equality and If women are going to be officials in the PL they should not get preferential treatment.

The abuse a lot of male officials get from players is outrageous but this incident really is nothing more than Aguero trying to get one over on the assistant ref to get a throw in.

From a female point of view I think it’s been blown out of proportion. It didn’t even register with me at first because I didn’t think it was a big deal. At worse i guess it could be seen as a little bit patronising. But there is nothing to say Aguero wouldn’t have done the same bad it been a male ref.

I honestly believe people are jumping on it because she’s a woman. But if that were me, I wouldn’t want to be singled out for my gender. Players do put their hands on male referees, be it their shoulders or whatever. It’s just not flagged up.

I listened to an interview with Sian Massey a while back actually and she seemed pretty strong minded. She’d have said if she felt intimidated. To work in the men’s game she has to pass all the same fitness tests etc as the men do, and she loves that. She doesn’t want to be viewed differently.

One thing I will say though is I didn’t like Pep’s comment about Aguero being the nicest person he has ever met. That’s completely irrelevant. Up there with “he’s not that kind of player”.

I honestly believe people are jumping on it because she’s a woman. But if that were me, I wouldn’t want to be singled out for my gender. Players do put their hands on male referees, be it their shoulders or whatever. It’s just not flagged up.

This is right and, if female officials want equality, they shouldn’t be treated differently.
When I saw this and heard some of the pundits say it was “condescending” I thought that was more sexist and condescending than what Aguero did.

Not the first time for Pep either(Bernardo incident).
I don’t think he really gets it.

I see some fingers rubbing… could that be the reason Aguero got complained???