Generally speaking definitely true. Feel like Breaking Bad nailed it. Until they ruined it.

The Wire also had a nice ending.

I think the 2006 CL ending was the worse. In my head it ended up with Thierry lifting it high in the Paris sky

Still not watched that

Never got used too Kelly Macdonald being Scottish.
She had a beautiful Irish voice in Boardwalk Empire. 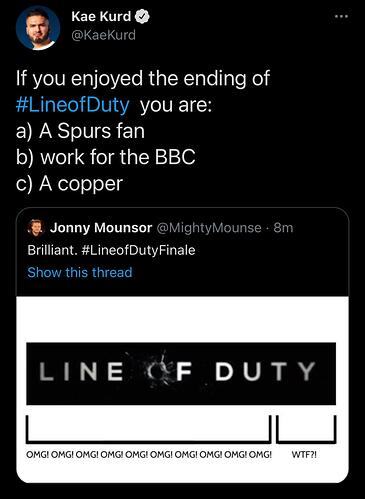 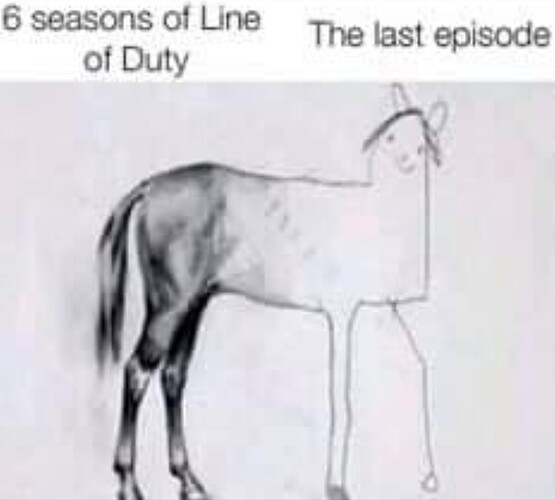 That Line Of Duty ending will be like the sopranos’ ending. At the time you all think it’s bad but in hindsight it was actually the only realistic way they could’ve ended and it was actually very good

Aware not many of you give a shit but here’s my 2 cents. The ending showed that fighting police corruption is futile because of how embedded it is in the system. You could’ve gone for a shootout with one of the cast members dying but the fact they got disbanded just as they were

Getting close shows that all the work was for nothing. Even when you think you can win, you can’t. Reflective of greater society (all those integrity in leadership things were digs at Boris Johnson obvs). This was the only way they could’ve ended it

Basically, it’s best to just not write a good tv show because it will eventually have to end and no one will ever be happy about it. I’ve been working on a couple of GREAT TV show scripts but I have a whole heap of rubbish ideas so Imma focus on them going forward.
1 Like
Joshua 3 May 2021 14:06 #92

It was a let down for sure because I was hoping for a tidy resolution and everyone riding off into the sunset. But that’s not what the show is about. 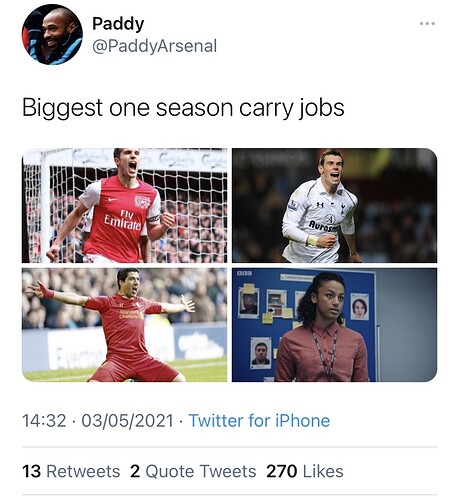 BBC’s “ Line of Duty ” finished its sixth season with a record-breaking viewership performance of 12.8 million overnight viewers for a 56.2% share. The numbers dwarf last week’s series record of 11 million overnights, or a 51.7% share.

Putting those numbers into context, the BBC said it was the most watched episode of any drama since modern records began in 2002, not including soaps. To find something comparable, one must go back to February 2001 when ITV’s “ Heartbeat ” pulled an overnight audience of 13.2 million. Considering two decades of changing viewing habits and the introduction of streaming platforms, “Line of Duty’s” numbers are all the more impressive.

There’s the next series then. Rogue copper from heartbeat climbs the ladder and AC 12 do the business.

Do you watch it stroller? You always like the posts but I don’t think you have commented haha

Yeah mate. I don’t come in the thread with everyone theories and spoil it for myself. Im just an numpty and blissfully ignorant.
What I find funny, which is probably an age thing is how you mentioned you enjoyed it by having to wait a week about for an episode.
Ive grown up that way with stuff. I can’t binge watch more than 2 episodes in a sitting on most things.