Ferguson vs Wenger | Pep vs Klopp

How many 10 + consecutive league wins have we in this league ?

I dare say these recent City and Liverpool sides have produced more than half of them due to elite quality.

Back in the late 90s United and Arsenal were taking home titles with 78 points etc.

I just see pool and city now as competing with each other. There’s no real rivalry.

I still enjoy watching their battles tho

I’m going to have to respectfully disagree with Carragher on this one.

Isn’t that what a rivalry is though, competing against each other?

There was more to the Fergie and Wenger one but I don’t get this notion of making City and Liverpool’s out to be some kind of sham rivalry.

Was it Carragher who said it?

Could have guessed, the dirty Scouse second-rate pundit bastard.

City are a plastic club so that massively reduces any sentiment / romance that a neutral will feel watching them.

There was real tradition and history to the rivalry between United and Arsenal. There was also genuine bad blood between the managers and players at various points. The matches often escalated and got out of control.

Nah. All the teams are competing. The rivalry is the something extra. Winning lots and being way above the rest is the only extra these guys have.

But that’s just the way I see it.

Just because there has been one notable iteration doesn’t mean that’s the only meaning of it.

Yeah I got that, it’s literally the definition of a rivalry though 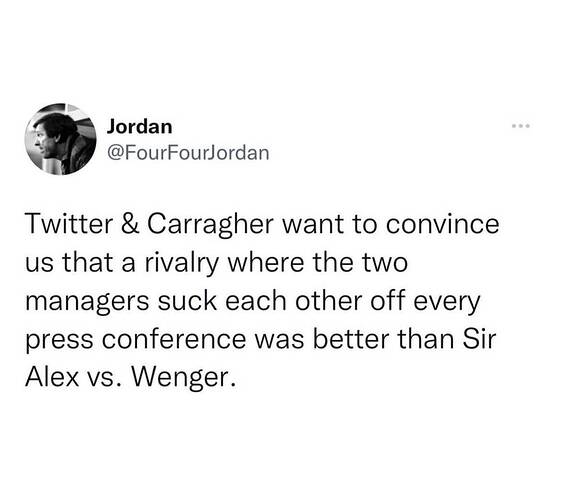 I feel like this headline was entirely designed just to wind up arsenal and United fans. To which you’d have to say they’ve done a decent job

Is it the best league in the world? Unequivocally.

But it’s stale. It’s missing characters, it’s missing fierce and personal rivalries. And this is the PL and Sky doing their best to try to push a rivalry that is genuinely nothing more than a great sporting rivalry between a mercenary team and a very dislikable team.

Not really. We’ve mostly laughed at it and argued over the technical meaning of a rivalry here.

Definitely, that’s what Sky is all about these days

These 2 clubs play off in a CL final this season it’s probably the final piece of the puzzle, it’s every chance of happening also.

I’d say some jimmies have been rustled

Going the way of Talksport where 90 percent of their content is based on troll propaganda. Gets those clicks to dying platforms though