And Gerrard dived for their pen that made it 3-3

3 up at half time and they have Traore and Baros. You have too win and then bottled the pens. Thats the worse loss in a major final that one.

Can’t really put that on Don Carlo, though. Even in Extra Time, Milan were the ones more likely to win. Shevchenko should have buried them if not for that stupid double save by Dudek.

Point is, the impetus, the drive, the set up. Ancelotti got it right. The players and the officiating, however…

Nah. He fucked up by taking Crespo off. They went walk about instead of going for the throat.

Agree to disagree on this one. Ludicrous to put that on Ancelotti, in my opinion.

I’ve talked about him and Everton on another thread, in a way saying it was good to have a data-point, but he did go to Everton with promise for lots of money to be spent and a new stadium on the horizon. Not the most glamorous maybe, but not something like Leeds United either. Just saying this directly addressing what seems to be a compliment on your part for him taking the Everton job.

I’m pretty sure he must have been aware of the fact Everton didn’t have as much backing compared to the the top six clubs. It’s not like Everton has been a sleeping giant just waiting for the right investors. I’m sure he took it as a short term option and maybe he could have achieved some small success. One can just imagine how much transfer money he’s been promised by all his clubs through the years.

Maybe it is similar to things looking a bit sexy at Newcastle right now (?). Would we say the manager at Newcastle this summer is going to have less backing than the top 6 clubs? I think the belief, that Newcastle fans have at least, is they are going to be big spenders, as was promised for Everton, by Usmanov.

Put some respect on this legends name. Seriously he is an undeniable legend and an elite coach

All the best teams in Europe put to the sword.

Champions of England, Italy and France all defeated in one campaign!!!

One of the best to ever do it and still relevant all these years later as an elite coach.

I agree totally and completely. Has to go down as one of the best managers of all time along with Fergie etc.

he’s had some duds this season both in the league and the CL but this particular finals was an absolute masterclass, perfect execution.

This is surely his best victory

5-3 against Klopp now. Must be one of the few managers with a winning record against him 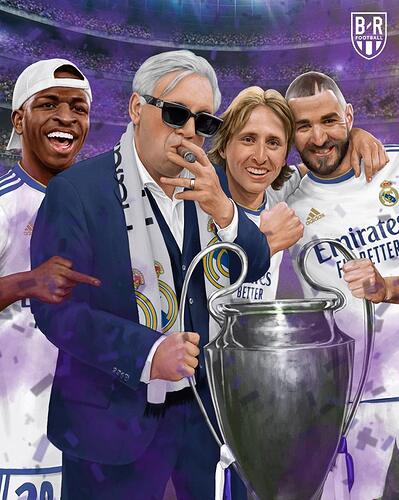