I have had this discussion few weeks ago and it bothers me that we are slowly going in a direction which is so dictatorial in nature.

People are losing jobs for instances which are happening outside the work hours and work premises. It should be deemed unethical to dismiss someone on those grounds. 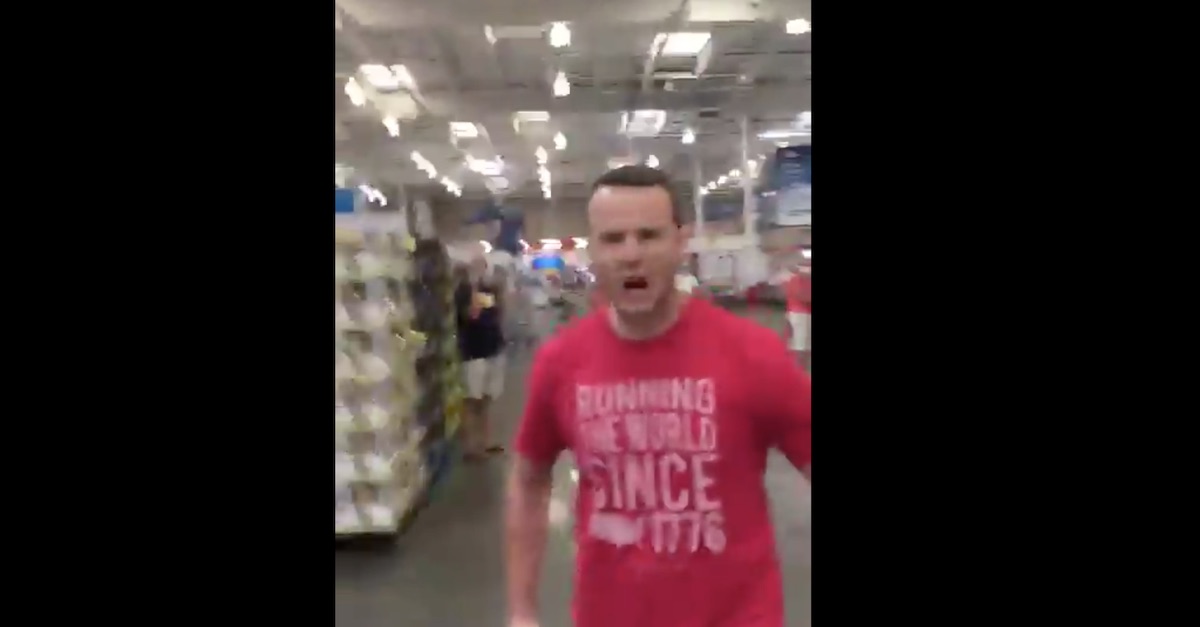 Maskless Florida Man Screamed That He Was the Victim When Costco Customers...

Yet another video of a store encounter featuring a maskless individual amid the novel coronavirus pandemic has gone viral. The latest one, apparently filmed more than one week ago at a Costco in Fort Myers, Florida, showed a man in a red "Running the...

But should he lose his job for this?

There was no review of the circumstances, straight off dismissal because there was a video and it went viral.

Our jobs dictate where we live, how we live, who we end up marrying i.e 80% of our lives anyway. and Now we want to have the fear of losing our jobs constantly for simple altercations as well.
Let’s all become robotic beings, constantly checking ourselves, not out of innate desire to be good but because we might lose our jobs.

Why are we allowing PR of the organization become PR of the individuals?
We continue to make it untenable to express conservative ideology and we wonder why right wing politics is on a rise.

Starting to get worried about that time you said you wanna bang their cute teen faces?

You can rush back and delete the post if you want but I have the receipts. You’re fucked buddy. Maybe not today, maybe not tomorrow, but one day. Think I’ll wait for you to get a couple more promotions first.

I think everything should be judged on an individual basis. It’s not ideal to lose your job for an error you make outside work but you have to take into consideration the following;

For example, the woman who tried to get the man arrested and used his colour as a means of criminalising him absolutely deserved to lose her job.

I haven’t watched all of the above video but I saw a clip of it on INstagram… just seems like he got mad to me. Would be ridiculous if anything happened to him.

I haven’t watched all of the above video but I saw a clip of it on INstagram… just seems like he got mad to me. Would be ridiculous if anything happened to him

And yeah he got fired.

Thank you to everyone for their comments and messages raising awareness about a former employee at Ted Todd Insurance. Their behavior in the video is in direct conflict with our company values and their employment has been terminated.

Threatening behavior and intimidation go against our core mission to be trusted advisors in our community. We are also committed to immediately reviewing our internal existing culture at TTI. We ask that further feedback be sent to HR@tedtoddinsurance.com Charley Todd CEO

The comment section is just so toxic.
They all think they are doing good but they just messed up someone’s career because he lost his cool.

It looks like the person filming started the confrontation, not only that his mask is behind his head anyway.

This is the problem that’s going to grow masked versus unmasked.

What do people think the solution is here? I’m genuinely curious, cos I do think that public shaming can be pretty concerning, and sometimes people lose livelihoods over stuff that doesn’t warrant it.

Not commenting on that specific example as cba to watch it, so this is a general point, but where do we draw the line in terms of an organisations right not to have their name or reputation even slightly sullied because of some social media outrage?

If I run a business that relies on its good standing with the public/customers (as most do), if one of employees gets blown up on twitter for alleged bigotry, violent/threatening/intimidating behaviour etc and I feel the knowledge that they work for my company might harm the company and therefore my future and possibly the continuing employment of other members of staff, is it reasonable for me to say they’ve broken terms of acceptable conduct and that I want to dismiss them?

As long as twitter exists, and stuff like this gets posted, people on twitter are always gonna comment with their thoughts. It’s just the very nature of the platform that individuals can speak their mind, and they will do so, so it doesn’t seem that we can do anything about that stage of the process. So it seems to me the only way you can then stop people losing their jobs over the twitter furore is to change employment laws and limit a companies ability to dismiss people for that kind of thing. But as a society, we seem to value employers/companies rights quite highly, so is that something that is ever gonna happen, and is that something that would have enough support to be enacted?

I understand why people are perturbed by stories like this and people losing their livelihoods, so I wonder what people propose as a way of fixing the issue.

(very much my general thoughts, not challenging you to solve the perceived dilemma Trion)

to change employment laws and limit a companies ability to dismiss people for that kind of thing.

I was thinking the same thing. Employment laws should state that the employers are not allowed to dismiss someone before an investigation is conducted (or at the very least the culprit is officially accussed of something).
If the justice system doesn’t deem that the offence justify a trial, there shouldn’t be any dismissal.
Or something along those lines.
People won’t change, Employers can’t risk revenue, so it has to be within the law itself so people won’t point at Employer (or Employer can simply shrug & say that they can’t go against the law).

The problem we have is the fact that people that wouldn’t buy your product or use your services, weaponise the fact a filmed confrontation can get people fired; usually these things are always out of context. Companies are afraid they bottom line would be hit so to appease the mob it’s easier to get rid of a person than to stand up for them.

So long as social media is about, people now have to be careful about the things they do in public it’s that simple. Social media gives a voice to everyone, and whether you want to hear it or not there will always be that platform for people to speak.

Knowing this now means that anybody and everybody should probably just be a decent person and watch how they act and what they say and there won’t really be too much in the way of people losing their jobs.

I’m against a guy losing his job for losing his temper in a non violent (but still threatening) but it seemed to outrage enough people in the world that it had to happen. That’s the way of the world and we can sit around and complain about it or do what most people are doing and adjust to it.

So if someone agitates you enough for you retaliate and that said person films you’re retaliation, then it’s justified for you to lose your job and be ostracised.

And what exactly is a decent human being? What’s the measurement? And who sets the standards?

Do you just purposely misread everything? When did I say it was justified that the man lost his job? If you bothered to read what I’ve written in this thread you’d have seen I said I don’t agree with it.

But it’s the way of the world now because of social media.

I don’t misread anything, I just asked a question based on a section of your statement.

People on social media have found it is the most effective way to cancel someone you don’t like, and since none social leans left all you have to do is cry isms and phobic regardless of whether it’s true or not. You’ve seen yourself how people film altercations and crop the footage so they use it against the person.

I never learn my lesson

I didn’t think it was that difficult a question.

I haven’t watched all of the above video but I saw a clip of it on INstagram… just seems like he got mad to me. Would be ridiculous if anything happened to him.

@mhappy he’s referring to this part mate, easily missed, but adds a bit of additional context to his later comments that might seem like approval of people losing their jobs.

It’s not a difficult question. It’s just not one you had to ask me if you bothered to read through the thread. 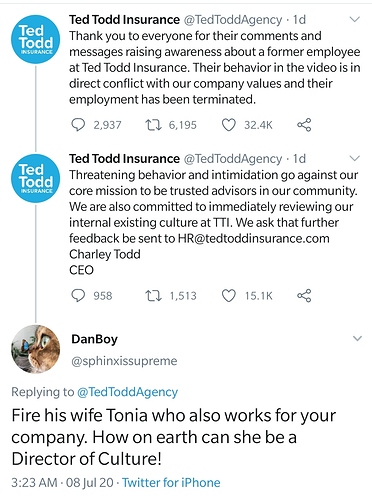 They are also going after his wife.

it’s the way of the world now because of social media.

I really think Regulations should come in to combat this.

This is more or less mob justice which is an illegal act.

Thread should be called cancel culture.