Guendouzi, Saliba and Maitland-Niles out on loan. Holding and Pablo Marí starting, with Elneny as a playmaker between the centre backs

Quite the rebuild, this.

There can be no other explanation besides Arteta just being an actual literal dirt pounder. He’s really just fucking stupid

Holding has always been dog shit. A risk worth taking but he’s ducking shit.

Plain average.
Average Joe.
Not anything better than Chambers to secure his starting spot, and not potentially better than Saliba.
Same to Mari.

Honestly mate it was a sensational goal. Ball in inch perfect and Sterling’s movement pure class. Can’t save every situation. Peach of a header too.

The blokes 5 foot 7 mate and has scored a header from 6 yards, yeah the cross was good, yeah Sterling is quality but that shouldn’t be happening.

Everything by Mahrez and Sterling was perfect but Holding also fucks it up pretty badly. He sees Sterling and probably is more worried about him getting in front than getting behind . But even so once the ball is struck Holding isn’t far from Sterling and just doesn’t react well. Sterling is not that far behind him, maybe a yard, he might win a header on an inch perfect ball but he shouldn’t have a totally free header. Holding doesn’t even try to get a body on him to throw him off or go up to contest it at all.

This is an area where raw athleticism really matters. I think a CB like Gabriel (or Saliba for that matter) takes a step back toward Sterling then gets up quickly enough to at least contest the header if not win it. 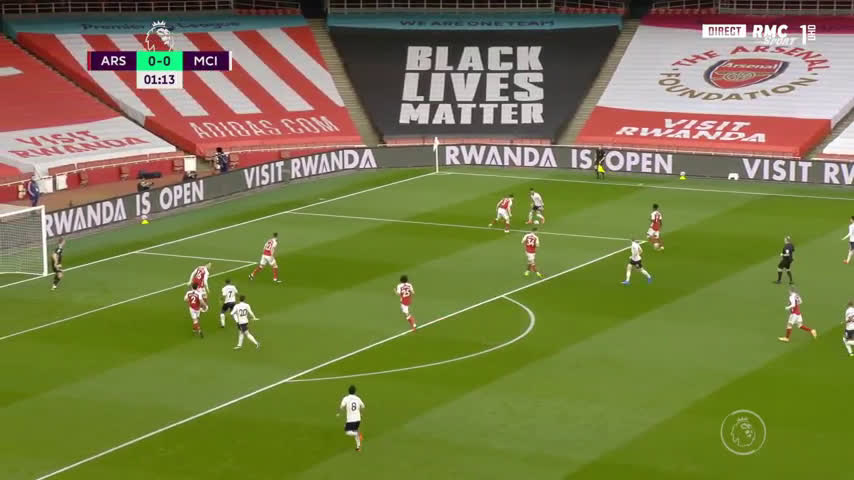 Holding straight up underestimated Sterling, same for Hector. They didn’t expect him to take a leap like that and actually head it in.
The way they just turn there it looked as if they expected the ball to land on Bernardo Silva.

Honestly mate it was a sensational goal. Ball in inch perfect and Sterling’s movement pure class. Can’t save every situation. Peach of a header too.

And this I actually agree with u, it was just a really well worked goal, teams as quality as city are gonna score on you no matter who you are. The issue is our inability to create anything on the other end. 1 goal is an insurmountable lead against us atm under Arteta.

If David Luiz allowed Sterling to score that easily the outcry would be insane from the Arsenal majority.

I agree the bigger picture is an issue though @BigWeng_4LYFE, 0.33 XG when trailing for 88 minutes is pathetic.

I thought we did quite well. I’m certainly not going to beat myself up over losing 1-0 to the team with the best defensive record in the league.

I’m certainly not going to beat myself up over losing 1-0 to the team with the best defensive record in the league.

I think more would take this attitude if there hadn’t been ten other losses in the league preceding this one.

Same with Tierney as well. Bellerin gets stood up like that he’s murdered.

That’s the thing it isn’t just about this loss, it’s about the fact we have more losses than wins after 25 matches and are deservedly sitting 10th.

I thought we did slightly better than previous league appearances against City dating well back to Wenger times without ever really looking like scoring though.

City bang on form and the whole of our defence cost less than John Stones alone.

It’s not like Wenger was getting any better against them at the end of his tenure.

Without Partey we have a real problem in centre midfield but that’s been true since Santi Cazorla got injured. Pepe still looks like 70m spent the wrong way and now Aubas gone off to la la land. No surprise we looked second best and we got exactly what most of us knew we’d get before the game.

A big fat nothing.

Broccoliboy would have been slaughtered for sure. But, Tierney is Scottish grit and all that so gets a free pass and instead it was a sensationally crafted goal headed by English grit midget Sterling. Nothing anyone could do anything about.

I’m certainly not going to beat myself up over losing 1-0 to the team with the best defensive record in the league.

I agree, but it’s not the 1-0, it was the abject, cowardly performance that we gave…Our so called manager set out to NOT lose, that is NOT the Arsenal way…cowardly and despicable!

I’d rather try to put on a defensive display and grind out a draw than lose by 5-6 goals.

Agreed, but to grind out a draw, we do need to try to attack even occasionally…Arteta just set us up to not lose, any goal conceded fucked up his plans…we never looked like scoring, as I say…very cowardly, however I am not surprised!