I know it’s been explored elsewhere but I thought it would be fun to see where you fanatics think the blame should land for our current plight as a club. If you’d like to make ur own pie chart and contribute here’s the link https://www.meta-chart.com/pie#/display 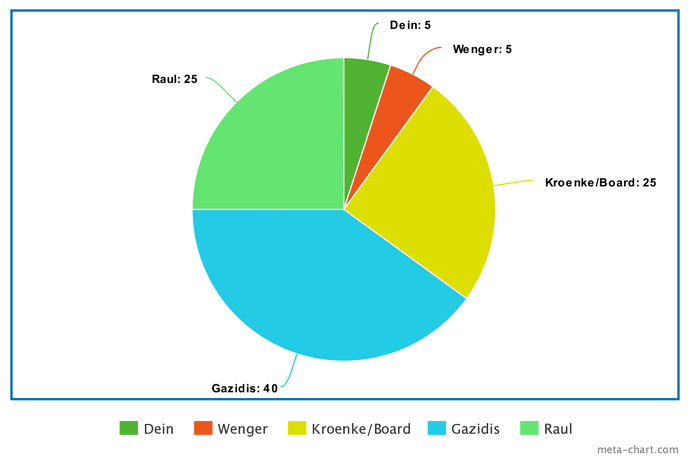 Dein selling out is kind of the catalyst for all of this. Someone with more knowledge of this might be able to comment more, but if Dein hadn’t sold out do you think we’d currently be owned by someone who doesn’t have much passion for the sport? Also if he’d never have sold do you think that we’d have moved into the Emirates? A new stadium was imperative but in hindsight I think that renovating Highbury would have been cheaper and the right move in terms of club identity.

I’m sure many of you will place much more blame at the feet of Arsene, but to me even tho he made mistakes and had faults, those came from an honest place. He loved the club and wanted nothing but success for the club and fans. He brought that of course until our stadium move and as he acquired more power his low risk boomer mentality did hold us back. I’ve maintained that if he’d been paired with a true talent evaluator I think we wouldn’t be in this situation to begin with. Which leads me to my next slice of the pie, the ppl who could have constructed the club properly.

Having an aloof owner and board has been the death of the club. I fought it for a long time because Kroenke isn’t the decision maker, but he’s allowed this to fester. A more savvy football man would have cleaned house ages ago, and the old saying is true in this case…a fish rots from the head down. The board just seem clueless and are there only really to protect their interests and dont really give a shit what the product on the pitch looks like, as long as they keep their cushy positions.

And now on to the guy that’s been making the big decisions at the club. Wenger for as uninspiring as his policy was between the years of 2007 - 2015 or so, at least had shit under control, achieving the minimum to keep us a top club. Top 4 finishes, some domestic cups, which imo is admirable based upon the resources at his disposal. However around 2014 or 2015 is when we started to emerge from the financial restrictions and Gazidis was becoming more influential in the decision making. The guy just doesn’t know football. He actually had some decent ideas like using analytics, but he had no clue how to apply that and subsequently introduced Stat DNA. Making some of the worst signings in the history of the club, just flushing money down the toilet. Of course again, clueless on who to hire to replace Wenger, clueless on the kind of structure we should have, hiring Sven only to handicap him. Truly a headless chicken, and this guy was running our club, easy to see why we are in this rut. We are incredibly fortunate to be rid of him thank fuck for that. Lurd knows with our owner, if Gazidis hadn’t have thrown in the towel, he’d probably still be here.

Maybe I’ve given him too much of the blame here considering he’s only been here a couple years or so, but so far it seems like his quest for power means more to him than making the club a success. Also if reports are to be believed and he wanted to keep Emery, I fear for future prospects with him at the helm. Recruitment wise it also looks like he’s made some major errors, Pepe for 72m seemed like a coup at first but now it just looks like poor scouting. My biggest issue with him is forcing our one bright spot out of the club, Sven. And its maddening that he could make a big time hire and stop the bleeding, and yet we clearly either have no clue (unlike spurs who sacked Poch and had Mo in the door 48 hours later) or are being cheap, or just maybe with him at the helm we are a rudderless ship. We need a strong character at the top who cares about winning, and I’m not seeing that at all from this guy. Also to be noted he was hired by Gazidis so there should automatically be question marks.

It is of my understanding we applied to the council to renovate Highbury but it was knocked back for some reason, I could be wrong though.

I don’t know how to even delegate the blame anymore, I’m just disillusioned with the club and everything Arsenal at the moment.

Depressing as fuck seeing a club with similar resources get consecutive 95 + point seasons and making back to back CL finals, whilst we’re doing what we’re doing.

The biggest thing is the waste of money that’s why I ascribe so much of the blame on Gazidis. Xhaka and Mustafi were not Wenger buys, I dont care how much you try and convince me. Those guys don’t fit in to the type of guys Wenger purchased whatsoever. Wenger only spent big sums on guys he knew to be quality like Özil and Sanchez. He’d take chances on guys like Gabriel but for no more than 10m or so.

I agree with a lot of this. There is just a huge failure in leadership and competence at the top of the club and has been for a long time now.

We’ve probably reached a tipping point now where it’s most likely going to get a lot worse for a long time before it gets better again.

Not sure if we’ll ever win another league title in my lifetime and winning a CL just looks impossible. But things can change.

This current owner and leadership regime are completely lost in how to manage a top football club and have been for a long time. If we’re lucky we’ll stumble into some competent leaders soon but I’m not betting on it.

Otherwise, hopefully Stan and son will fuck off soon and then we’ll get another bite at the cherry to become a great team again.

I agree Xhaka and Mustafi were probably Gazidis / stat DNA buys, so I won’t try and convince you otherwise in that regard.

At least attempt to have an intelligent conversation and take ur personal bias and emotion out of it. Wenger was risk averse, go ahead and blame him for that aspect, but putting 75% of the blame on him is silly and foolish.

What happened to your Victorian accent?

Says the man who doesn’t rate the CL as a trophy and claims we won it once.

I would like to offer an apology for momentarily forgeting my vows. I shall repent by not relieving myself of impurities for rest of the night.

I do think Wenger lead us into a terrible decline in his last 10 years as he didn’t change with the times. The legacy problems he left in the squad were horrendous and much worse than the strong mentality and defensive organisation in the squad he inherited.

I’d argue though that those above him should’ve moved to replace him much sooner and are therefore very culpable and I agree the failure to bag up Klopp when we could was a terrible move by the clubs leadership.

Says the man who doesn’t rate the CL as a trophy and claims we won it once.

Go on then I’ll put a Kroenke cherry on top.

How the supporters view who is responsible:
100% Kroenke and the board’s incompetence, lack of ambition and urgency.

How the board view who is responsible.
100% The Noise.

I don’t think blame can truly be apportioned at this stage. Bad decisions after bad decisions have compounded to leave us where we are. Ultimately that all boils down to a disengaged ownership I would say so if pushed…

Someone with more knowledge of this might be able to comment more, but if Dein hadn’t sold out do you think we’d currently be owned by someone who doesn’t have much passion for the sport? Also if he’d never have sold do you think that we’d have moved into the Emirates?

Dein was still on the board when we made the move. He had touted for us to move to Wembley which thankfully never came to pass. Redevelopment of Highbury was impossible unfortunately.

Dein didn’t sell his shares totally until he had actually left the club. He was the one to introduce Kroenke into Arsenal circles though and of course he never sold his shares to Kroenke either. I’d say it’s safe to say he regrets bringing kroenke in but we also could have ended up with worse owners like the venkys or something.

I’ve written enough posts on this but tl:dr; the board should’ve invested and not friend-zoned our manager during the stadium, the rebuild was difficult and competition ramped up, love Wenger, he worked hard and he did what he could, the best of intent, of course to a small degree he also made mistakes so he has a tad responsibility but he was also ultimately hired and worked hard with the best of intent.

Now the current board is getting the details wrong a bit. I am not angry at Raul for his signings, nor am I angry at Sven for his. Some good players have arrived. I liked Dein. Gazidis seemed utterly incompetent.

I am angry at how we still defend like a chicken coop after 3 different managers and say 20 different defenders have gone through our doors and don’t know who to blame, I’d put them in there if I knew how to lol. How can we still not get it right. It’s maybe even slightly worse now

Maybe this is the storm before the calm.