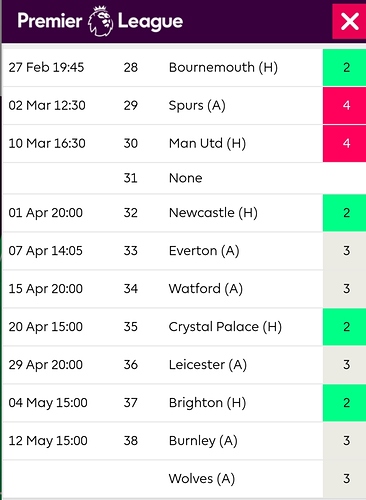 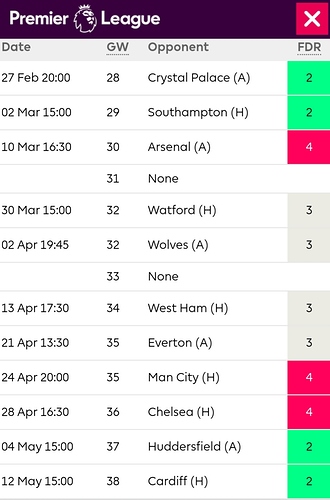 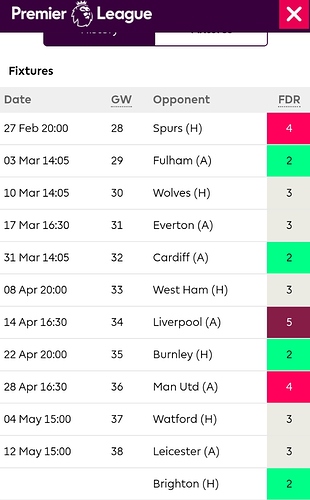 Will we finish in the top 4?

I mean, we really should be winning 80% of those games at the least

We arguably have the best fixture list coming up, but I’m still sceptical. Would have to be considered a successful season if we did manage it

If we improve our away form yes because our run-in looks good.

Shall I trust that FDR?

I don’t think we’re any less likely than any rival right now, but if we do get it I think it will be down to their failure rather than our success.

I wouldn’t complain though, it would certainly add some hope to next season.

Still a no from me, not getting my hopes up for the inevitable disappointment.

Need City to help us out tbh by slapping United and Chelsea.

Also Chelsea and United play eachother which is great

It’s going to be very close. But I predicted us to finish 4th pre season, and I’m sticking with this, so therefore I do think we can finish just inside top 4. Can’t afford to drop many games at all. Looks like you’ll have to finish with 75 or more points to get 4th this season.

With 11 games left, we’ll have to win the bare minimum of 6 games and draw most other games, though that would be cutting things fine. Preferably, we need at least 7 or more wins from these 11 games to really boost our chances.

Anything under 75 points might end up being a fraction short of what’s needed.

It’s ours to lose really. So Chelsea are going to be playing 120 minutes here before Spurs visit them in 3 days. You’ve got to bet they drop points there and they have a harder run in than us.

Allot depends on the upcoming Spurs and United games. We can’t drop too many points or lose to United. If we go into the run in only a point behind United after playing them or better we should have it in the bag. If United beat us, take 9 from 9, while we take 3 from 9, we’ll probably miss out. Could really do with beating them at home.

We can do top4, just need to make less fuck ups than our competition.

We’ll drop to many points in our away games and get pipped.

If we can actually start keeping clean sheets away from home, then we’d have a decent chance.

No from me. United won a different sort of point today. Squads still to strong even with a few knocks. Its nice to still be in the mix though on the standard of football we are playing.

I am going to say we will manage a top 4 finish, but it is going to be far more tough than it seems. Even if we beat spuds and manure, away games to Everton, Watford, Leicester and Wolves are very very tricky fixtures and be surprised if we manage to win more than 2 of these.

If we can win 3 of our remaining away games I think top 4 is possible, but do we have 3 more away wins in us ?

Yes, imo. I think playing the right formation will help us away from home in our run-in. It seems Emery have finally chosen the right one.

“Easier” on paper but we are fully capable of losing against Everton, Watford, Leicester and Burnley away. That’s not mentioning the games against Spurs and United.

I don’t fancy us to do enough. United look more consistent than us right now.

I think we are building a bit of form now and will beat the majority of them if we keep this up. We need go on our fraudulent unbeaten run at the beginning of the season again. Only thing that worries me is our RB position…

@Aussiegooner I think we win at Everton, Leicester and Burnley. Bonus points if we get anything at Wolves and Watford.

Just imagine if we beat the scum at Wembley… that stuff will be magical :giroud3: