This has come about because a guy in one of my WhatsApp group chats said that Arsenal fans thought they were signing a prime Paul Scholes when we signed Xhaka. To which I responded that Scholes was overrated anyway. As well as Giggs. The response I received was as if i’d just filmed myself strangling some puppies.

I think both Scholes and Giggs are great players, but a tad overrated. Giggs especially. Longevity doesn’t equal world class.

I also think Aaron Ramsey should be Arsenal captain, which a lot of people disagree with.

What are your unpopular footballing opinions?

I think Wilshere and Coquelin are probably our best midfield pairing right now and should be given a run of games to try and salvage this fucking rapidly sinking ship. 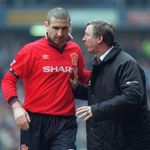 Sir Alex Ferguson: I only ever had four world-class players at Manchester United

Sir Alex Ferguson has insisted he only ever had four truly world-class players at Manchester United - and neither David Beckham nor Roy Keane are among them.

Fergie seems to think Giggs is one of four world class players he’s managed at MU.

Giggs has always been overrated.

Didier Drogba was vastly overrated and his record in big games overshadowed his inconsistent scoring form.

Alexis Sanchez does more to hinder our teams performance than he does to benefit it.

Handful of good performances, but his bad/awful performances overshadow those now. The amount of times he gives the ball away almost childishly is shocking to me. Especially a player in his position, with his responsibility. I can’t believe it’s still in his system. Can’t he learn it? Is he just not good enough?

Ferguson is a bit economical with the truth there because he broke the transfer record several times when he was there.
So what did he think he was getting for all that money?

As for Giggs being world class, if he wasn’t one of the players who came from the youth team, and was bought from another European club, people wouldn’t be saying that.

He was a very good footballer for a long time but longevity doesn’t make you world class.
If you looked at a list of the top footballers from Europe, and didn’t have Man U supporters voting, I’m fairly sure his name wouldn’t be near the top.

Fergie seems to think Giggs is one of four world class players he’s managed at MU.

A lot of people think the same. That’s why it’s an unpopular opinion…

On the subject of Fergie though, another (maybe) unpopular opinion I have is that he fluked both his Champions League final wins. Good old fashioned luck.

Not to mention his physical deficiencies and poor positioning

Oh bullshit, Coquelin is so much more mobile than Xhaka you can’t even compare them!

Roy Keane was underrated, purely because he would make sure most games were won in the tunnel before kick off.

Giggs has been a factor for him in pretty much every successful team he had during those 25 years. From the Cantona-led teams to the team build around Rooney and Ronaldo.

Scholes was quality but I agree, Giggs was vastly overrated just because of his longevity.

Keane was underrated in contrast.

Pele was a bit of a fraud. have no doubts he was a fantastic player, but I feel Cruyff, Eusebio, Maradona are above him in the conversation of the GOAT and Messi and Ronaldo are probably the best ever.

After reading up a bit more about those times, it seems he was able to big himself up a lot because he stayed alive while his teammates who were also worldclass and helped him score the goals died and weren’t able to tell their stories. (Garrincha, Jarizinho etc.)

Like everyone including me just assumed he was integral in the 1962 WC, but it turns out he was injured most of the tournament and it was Garrincha who basically ran the show.

He also never played in Europe. Furthermore, those 1,000 goals he scored includes the goals he scored in all friendlies as well lol, vs like u23s or some Brazilian pub teams etc. If you count only the competitive goal total, Eusebio actually scored more in his career.

And I bet Messi and Ronaldo arent that far off.

I think you have misunderstood the thread title my friend

Not sure this would still be classed as unpopular, but I don’t give a shit if Özil stays any more. He creates a hatful of chances but if we don’t have the right pieces around him it’s basically pointless, he isn’t peak Fabregas in that he doesn’t have the ability to drag us to victories. If he’s surrounded by shit he’s far less useful than plenty of other players who aren’t just the last piece of a puzzle in the way Özil is. We could be a better side with an inferior player to Özil playing instead.

3 defender formation is the worst formation of all and it is boring to watch. At times too congested.

Kolasinac will soon be deemed not good enough. Just a gut feeling.

Ramsey should be sold if he doesn’t show signs of making it easy for his partner midfielder. If he is around you could have Kross partner him & Kross will start performing poorly. Midfielder are not supposed to be so selfish.

I fear Arsenal are going to enter the Liverpool phase regardless of managerial or player changes.

I think you have misunderstood the thread title my friend

I just meant that pretty much everyone would now agree with you, not that you had really misunderstood

Damn man, I had SUCH high hopes when we signed Xhaka

Alan Shearer is adored mainly because he never played for a traditional top club.