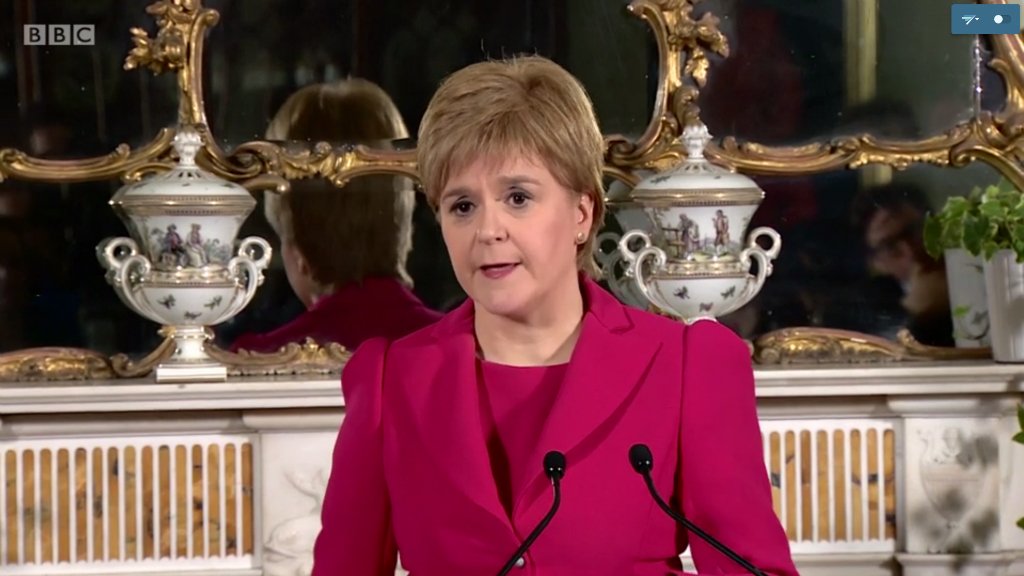 She can want it but she’s almost certain to be told to get fucked. Negotiating an EU exit is difficult enough without bringing further complications into the mix.

Not sure why Sturgeon even wants it for this time, potentially because she knows this will be her last chance to deliver it. Also, no way will Scotland be able to take the UK’s membership of the EU - she is truly deluded if she thinks that’s even remotely possible. 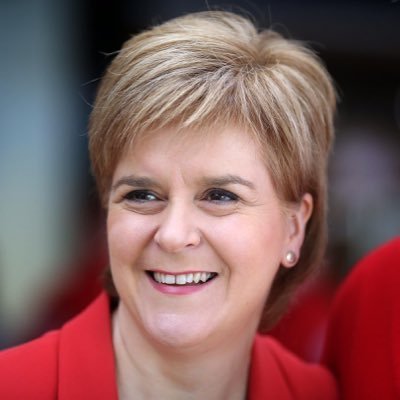 Getting on the Wembley band wagon looking for tickets…
What did she wear?

She’s a proper snake lol. Let’s sechdule smack bang in the middle of Brexit negotiations. I’m guessing she’s on the clock though. God forbid Scotland leaves on someone else’s watch. 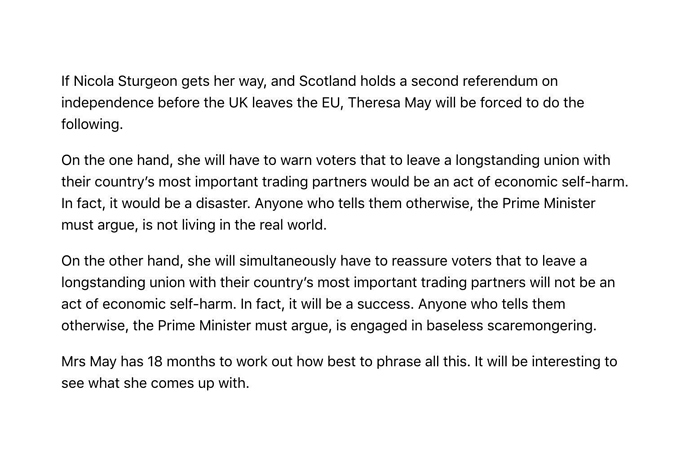 Politically, she faces the toughest situation since WWII. Not sure how she will balance the two, my guess is she won’t allow a referendum until at least 2019, once we have left the EU. It may actually make sense for her to wait until 2020 or 2021 until the UK and Scottish parliamentary elections.

She’s a Tory Prime Minister. This is an open goal for boosting her ratings in England.

The ironic thing here is Scotland are doing this to stay away from a hard brexit. When in actual fact they will be the country most greatly affected by a hard brexit once they leave. Something like 80% of their trade and business done with rUK? By leaving, Scotlands future is now single handely going to be decided between Brussels and Westminster who potentially have less to lose than Scotland who will be standing watching.

Supposedly doing this to get away from Tory rule they will at the mercy of May to deliver THEM a good Brexit.

I heard a political analyst use the phrase ‘hard independence’ today. As they could be faced with being out of two unions (albeit they will seek to rejoin the EU) for a certain period of time.

Supposedly Spain might want to veto Scotland because of their issues with Catalonia/Basque Country.

The other problem the SNP have is that many independence voters voted BREXIT and many remainers voted for the EU.

Would that not mean the remainers that also voted no to indipendance are more likely to vote yes in a second referendum because that would be the only way to possibly remain in the EU?

Right I didn’t want to say anything because it’s stuff that i’ve said unpteen times before, but @Kaner

EU:
Scotland’s entry to the EU is pretty much guaranteed if they go independent. There will be no veto from Spain. 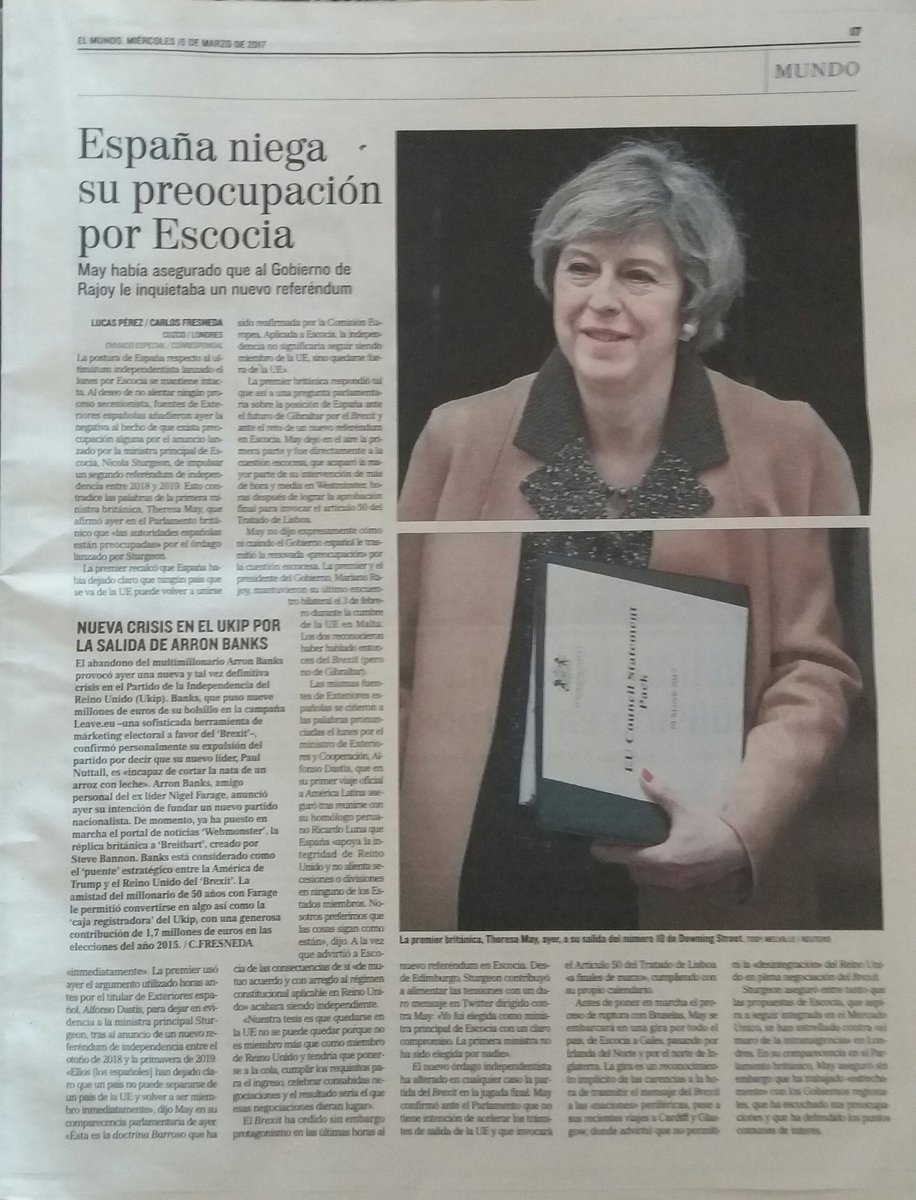 Spain’s issue is countries that UNILATERALLY declare independence, without the backing of their parent nations e.g. Kosovo from Serbia. They would would have no problem in accepting an independent scotland recognised by the UK.

Also, since Scotland meets all EU criteria already (as they are a member right now with the resk of the UK) their entry could he fast tracked.

An independent Scotland could be ‘fast-tracked into the EU’

Leading experts say a Yes vote to leave the UK could result in Scotland having the fastest ever entry to the European Union. 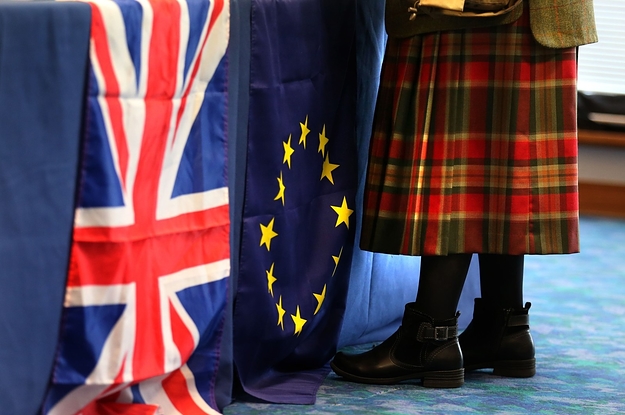 Two MPs from Germany's governing parties told BuzzFeed News they have talked to high-ranking EU officials about how to speed up an independent Scotland's entry.

There is massive goodwill in the EU for Scotland, especially now that the SNP have distanced themselves from Catalonian seperatists etc to get Spain more onside and of course the attitude of the UK re Brexit.

Imma bookmark this post fo I can just quote it again in the future, i’ll no doubt have to do one on the GERS report too.

Also I suppose we shall see what May does. If the Scottish Parliament votes for it to happen, she will have to have massive balls to reject it but i’m not sure what will happen. In any case, the Yes side will then hopefully enjoy another couple points bounce in support.

Nice post @Electrifying. Very nicely put. I will however just mention some things in response.

Firstly, you’re dead right on the distinction made between a unilateral declaration of indepedence (i.e. Kosovo and potentially Catalonia) and a bi/multilateral declaration that Scotland would be expected to represent, unless of course they go ahead with a referendum without the backing of Westminster.

There is also a large degree of goodwill towards Scotland within the EU, namely Germany. Mostly because they seem to ‘get’ the EU project, and because they are being taken out of the EUdespite voting largely for remain. There isn’t as much antagonism towards Scotland from Spain as is commonly reported online and in the media. Yes, Spain no doubt prefers the UK to remain together, but I don’t see why they would not support and have relations with an independent Scotland. Most of the langauge coming from Madrid is not anti-Scotland joining the EU, just a worry about the precedent that it would set.

So whilst Spain would view Scotland differently to Catalonia (despite the boost it would give to seccessionists), I would not expect Spain to favour any fast-tracking for Scotland, which would result in Scotland spending a fair amount of time outside of the UK and of the EU (perhaps EFTA membership could compensate this?).

Also, I think May will probably block an independence bid until after 2019. No way would she continue to block it once the UK has left the EU.

Edit: Only about 10 minutes after writing this post I noticed this on the Guardian: 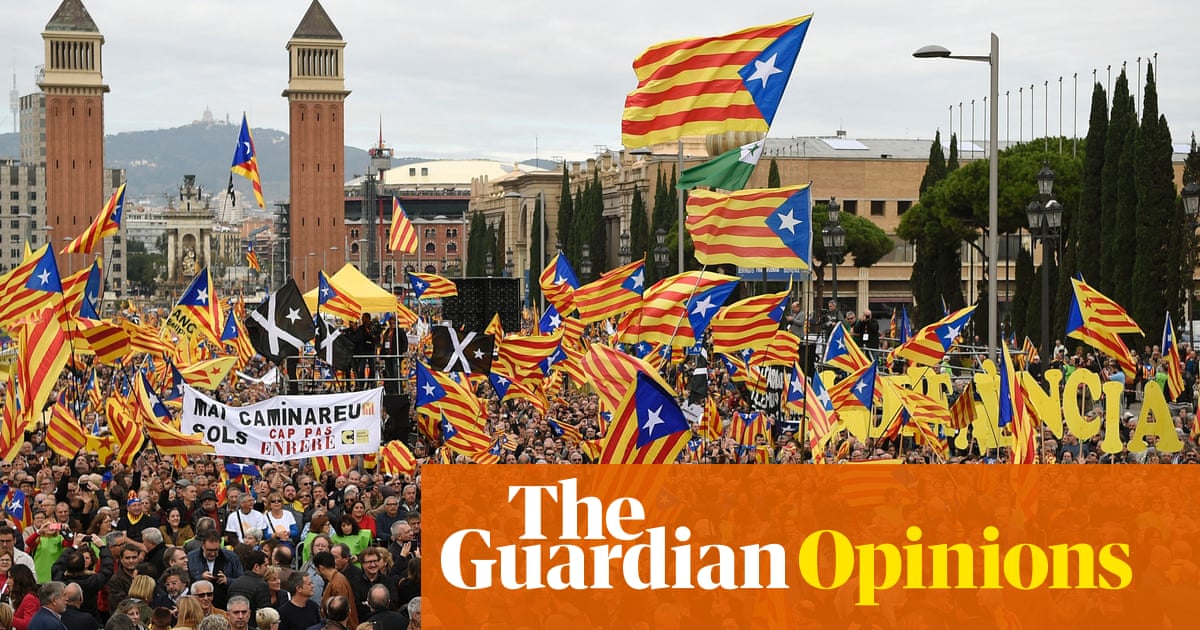 An independent Scotland’s route to EU membership would be easier, and possibly quicker, if the SNP delayed until after Brexit

A pretty good post on the position of the Spanish Government towards Scotland, and why it may be best that they put their indepedence bid on hold until Brexit. Giles Tremlett is a prettygood author and journalist, and I believe he’s lived in Madrid for a while now.

But is Spain in any position to resist pressure from Germany and possibly France regarding Scotland?

I don’t think the pressure would be monumental, it’s not an issue that would divide the EU. Besides, France tend to side with the Spanish position in regards to this.