What are the thoughts on Ange at the helm @Stroller ?

All good mate. Fans all onside it seems. Very positive football and good to watch.

Going off what my season ticket holder brother says.

I can tell you he’s done incredible to have Celtic competing back with Rangers. They were an absolute shambles last season and needed a hard reset of the squad. He’s done it in two transfer windows.

If they win the league back so soon. He’ll go down in folklore

Form the keeper been in tonight as well. Took a great one to beat him.

Momentum is with Celtic.

I’ve watched Rangers last two games now and this is still Gerrard’s team and they can’t play the way the new manager wants. They don’t have the players to play like this. This is an attack heavy team with wing backs they can’t sit back

@FootballJOE
Said it once, will say it again. The best type of official club tweet: twitter.com/RangersFC/stat…

Hope Gio does it with the 'Gers this season.

@simotrfc
Them players are there because they wanted to play for Steven Gerrard, they wanted to show him how good they are. They couldn’t give a fuck about Van Bronckhorst, non of them are remotely arsed

This sums it up well.

I think GvB will end up a terrible appointment. He would be lucky to see the season out if this continues lol

That was his only lost so far I think?

However I’m always suspicious if a coach find themselves coaching in China so early. That shouldn’t be happening.

Yeah but its been coming. Performances have been dreadful.

@RobHarris
Raith back down on David Goodwillie: "We got it wrong." "The player will not be selected by Raith Rovers and we will enter into discussions with the player regarding his contractual position." raithrovers.net/52477/chairman…
1 Like
Calum 3 February 2022 13:16 #535 They’re only sorry because of the backlash. This isn’t genuine at all and it’s probably too late to undo the damage

Yep, Board and management needs to go imo

It’ll be enough for some but not for others. Going to have to start a rebuilding of trust and that takes time.

What a story and season this is turning out for Arbroath. They just beat title favourites Kilmarnock for the second time this season to go 4 points clear at the top of the league. Watched the game tonight on BBC Scotland and they played excellent. Great atmosphere from both fans aswell.

This is the league table. The other 9 teams are full time clubs. Arbroath are part time. 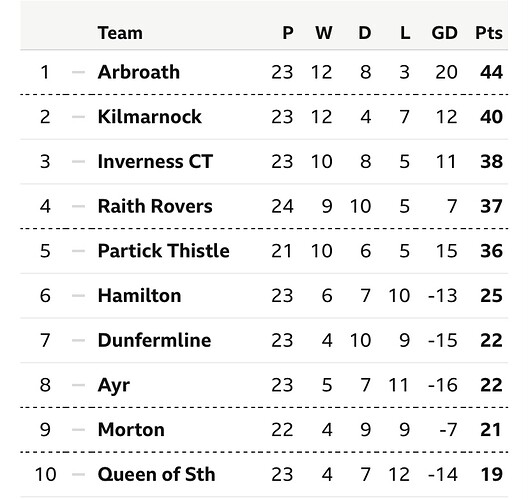 @PremierSportsTV
Ooh that's a beauty from Liam Scales! 😍 A fantastic strike in off the post from the edge of the box to put @CelticFC in front 🍀 https://t.co/tSxVrC0ng2
1 Like
shamrockgooner 13 February 2022 18:05 #541

Seems to be doing real well so far there.