What podcasts do people regularly tune into?

Personally I regularly listen to Arsecast and A Bergkamp Wonderland from an Arsenal perspective.

Outside of Arsenal my main ones are MMA Hour, Joe Rogan and Mark Maron but with those two it’s only if I take a liking to who they have on mainly.

Well we’ve only got Mondays right now but I listen to both. Andrews dulcet Dublin tones remind me I’m from and indeed live in Dublin.

Prefer the Monday one if im honest though. The marmalade tasting this week was great listening.

Anyone been keeping up with Alan Davies - The Tuesday Club? Stopped listening to it a couple of years ago. Is it still any good?

ABW of course with your boys Danny the GFP and Welsh Justice.

I listen to a few pro wrestling pods, and my main pods are for my alma mater; Iowa State University Cyclones athletics.

Everything by Dan Carlin

Anyone been keeping up with Alan Davies - The Tuesday Club? Stopped listening to it a couple of years ago. Is it still any good?

Still pretty much the same but infrequent now. I think they only did 10 or so last season.

I would love to listen Arsecast, but they speak too fast for my language abilities :santi2:

You can set your podcast app to play at half speed

Used to listen to the Guardian’s Football Weekly with James Richardson, he’s such a boss. Not sure why I stopped really, it’s consistently excellent (I assume it still is). I really like Rafael Honigstein too and he’s a regular.

Arsenal Podcasts: Arseblog (& Arseblog Extra), ArsenalVision Post Match (the American guy on it, Elliot, is a huge troll and not as funny as he thinks he is but they do a good job)

Miscellaneous: Stuff You Should Know 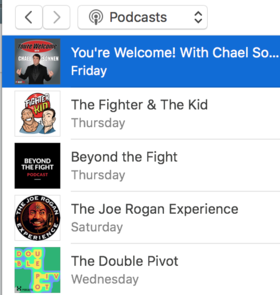 Ive heard Chael Sonnen is brilliant, must give that a listen. I really enjoyed him on Joe Rogan recently.

He is, the recent one with Jon Jones manager (post failed drug test) was really good.

Yes, I listen to a lot

I completed my first Arsenal Podcast last night and hope to do this weekly. My co-host and I kicked around the idea last season so I decided to download Adobe for editing and we podcast via Skype. The sound quality I was happy with, and we can have new guests on weekly, and if anyone from OA would like to join please let me know.

Excellent!! I will give that a listen over the next few days. Any plans to put it on stitcher?