We didn’t have a thread, but I hope and think we need one! I’m a big fan of this hillbilly circular racing, despite the fact it’s American

After Kyle Larson’s first ever Sprint cup win at Michigan, it’s off to Darlington next weekend in persue of the Chase. 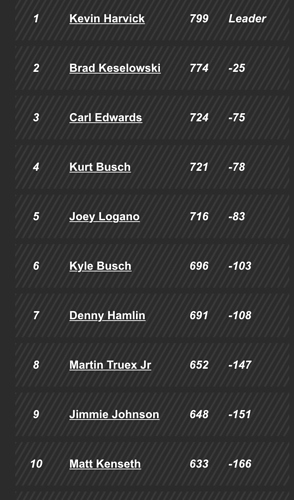 I know the name Kyle Busch because one of my friends from school called Alex was obsessed with Nascar (and Busch) and used to talk about it all the time, he used to say about a race called the Daytona 500 or something like that

Lol can’t stand this racing, I’m a mich bigger fan of the indy car series over here. I was thinking about making a thread on it but i figured nobody would give a shit lol.

As you all know I’m a huge Motorsport fan, but I really can’t stand NASCAR

Don’t have time or interest to commit to 30 odd races or whatever it is. Some of you will remember the member TheGFP. He was into NASCAR.

Like, @BigWeng_4LYFE , I much prefer Indycar, love watching that series. I had thought about making a Motorsport thread, so we could discuss anything outside F1, as there’s so many series I’m sure we all like, such as Indycar, Sportscars, MotoGP, Rallying etc.

I think an all round Motorsport thread will get way better use than one thing that won’t get much discussion. Maybe we could turn this thread into that, if you prefer @Ocke ?

If any mod wants to change the title, feel free.

Again, if anyone wants to talk F1, use that thread. This is for everything else outside F1. Whether you love Rallying, Touring Cars, MotoGP, Indycar, then post in here.

@BigWeng_4LYFE who you think going to come out on top in the Penske duel in Indycar with two races left?

Fuck yeah solid work mysty!!! It’s gotta be Pagenaud he’s been killing it. He took a step back last week on the oval but he’s money on the road courses. I don’t see anyone beating him. Plus he’s got the best equipment racing for Penske and all.

Yeah I think I’ll edge it to him, though it ironic if this ends up a year Power wins, when you think of other years he probably should’ve won but lost in.

Penske as you say are really strong around road courses. I love that they’re returning to the Glen this weekend, proper track

And always a big fan of Sonoma that ends the season. Though not a fan of double points deciding the season like it did last year.

Though Montoya’s been so out of form for ages. I think he’s been the biggest disappointment this year. And I don’t just mean his size

And btw, to show my commitment to the series, I stayed up and watched Texas, even though the race finished almost 4am here

Wow, impressive! You are a big time motor sports fan eh?? Haha wish I would have known. I was going to make an indycar thread around the time of the Indianapolis 500 but I figured nobody would care lol.

[quote=“Arsenal4thetreble, post:9, topic:614”]
Wow, impressive! You are a big time motor sports fan eh??
[/quote]Oh very much so mate. Motorsport and Arsenal are the main things I’m most passionate about since I was a kid

I try and go to several different events during the year. I like all sorts of racing. I think it’s good not to tie yourself to one thing, especially the way F1 is in right now lol.

What do you mean by the state of F1? I’d really like to get into F1, and I do watch often, but it’s kind of disheartening that Mercedes-Benz is going to win one way or the other. I wish it was more competitive. I love Hamitlon and Mercedes-Benz but I just wish other teams had a chance lol. This is the reason I love indycar. Every time you go out a new driver can be competitve and win. Rossi winning the 500 was a perfect example and such a fantastic race.

You basically summed it up mate. But without going into an essay, it’s not just the lack of competition up front, there’s so many things they’ve slowly made worse over the years that’s kinda taken the soul of the sport away. Don’t get me wrong, I still love F1, but I don’t think the sport is quite what it once was 6-7 years ago.

Indycar is so open and unpredictable, but it has a old school vibe about it which I really like. It feels more pure and risky.

You basically summed it up mate. But without going into an essay, it’s not just the lack of competition up front, there’s so many things they’ve slowly made worse over the years that’s kinda taken the soul of the sport away. Don’t get me wrong, I still love F1, but I don’t think the sport is quite what it once was 6-7 years ago.

Indycar is so open and unpredictable, but it has a old school vibe about it which I really like. It feels more pure and risky.

I really agree! F1 used to be “top of the line” and what most drivers aimed for until 15-20 years ago. Since then so many other series have past them regarding speed and entertainment. No matter how good you are, if you just have money and sponsors you can get a ride. But most importantly my biggest issue is with the points system. Only the top 10 drivers (of 24) receive points. Much prefer the series where all who finish the race receive points. A system like that could also help eliminate the domination of Mercedes. The step towards a 3 tyre system is good though.

No idea if anyone else watches MotoGP on here, but absolutely brilliant racing again today at the British GP. When you contrast the sheer predictable dullness of F1 these days, MotoGP has had 7 dfferent winners in as many races, 4 of them brand new winners.

Really good times for the series.

Indycar race in 3 hours mysty, you staying up to watch??

[quote=“Arsenal4thetreble, post:15, topic:614, full:true”]
Indycar race in 3 hours mysty, you staying up to watch??
[/quote]It’s not on that late here bro

It gets underway here at like 7:30pm my time. I’ve got it on record and I’ll watch it later this evening

For the sake of not starting a new thread I’ll post this here.

Quite a bit of game play footage for the upcoming Motorsport Manager by Sega. Looks really good, just hoping it can be customised to a similar extent as Football Manager in order to edit the real team & driver names into the game.

Currently on sale up until the release date (Sept 15 I think) too.

Sonoma GP coming up in about an hour and a half. Anyone gonna be watching? Pagenaud sitting on the pole and leading in points. Should be exciting to see if he ca win it all.

I did wonder if you’d post in this tonight, surprised you didn’t tag me

I’ll be watching. Even with double points, Pagenaud surely won’t fuck this up.

Too late for me sadly

Will watch the rerun tomorrow, gonna try to avoid hearing the results. Have to settle with watching the last 30 of Chicagoland now.