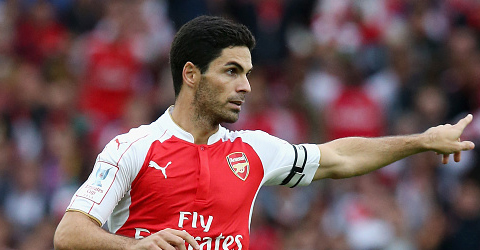 Mikel Arteta Amatriain (born 26 March 1982) is a retired Spanish professional footballer who played as a midfielder. He is currently the co-assistant coach of Manchester City, alongside fellow co-assistant Brian Kidd and manager Pep Guardiola. He then made a permanent transfer to Arsenal in 2011, and was appointed captain of the club in August 2014. Arteta won two FA Cups and two FA Community Shields with Arsenal, before his contract expired at the end of the 2015-16 season.

This should be a popular thread.

Unfollowed him on Instagram last night as he deleted all his arsenal stuff!

A player who was priveleged to play for Arsenal and be paid money way in excess of his abilities or availability due to his injuries !

Yeah I noticed this. What the fuck is this shit all about?

Probably a demand from City. He left on good terms so no reason for it to mean anything more than simple professionalism or obligation to his new contract.

I’d imagine those things are private and don’t/shouldn’t matter to your employer especially since you were five years at that club. Unless there are coke-snorting pictures up there or something like that.

I really can’t imagine anyone at Arsenal making a problem of Ozil still having Real Madrid pictures on his instagram. Nor shouldn’t they.

Fuck knows really. I guess City are a brand and so are Arsenal not to mention we are in direct competition or maybe it was just a personal choice by Mikel to put his playing days behind him and focus on coaching. Doesn’t really bother me either way as I think shit like instagram is boring as fuck.

I’ll take this as a compliment. If I were city I’d have come out and said “sure we let arteta keep his social media up and he can include his Arsenal postings as well. We enjoy our partnership with our feeder club and look forward to having Hector Belleron here next summer.”

MARCA Claim it was Mikel Arteta who had a go at Messi in the tunnel. Told him "What are you waiting for? go and get changed, arsehole" HERO

Arteta was fist-pumping and shouting in the tunnel. Messi said: "Go and enjoy yourself in the dressing room. Do not do this here." [Sun]

It's also being reported by @partidazocope that Arteta was the man who 'provoked' Messi, and the two had a heated encounter in the tunnel.
3 Likes
Electrifying 2 November 2016 23:21 #12

I’d love to box that little cunt out. Just love it.

When Messi can’t stop worrying about what Arteta said to him.

Pep “Mikel Arteta is working many, many hours and days after training specifically about the last action on the pitch with Sterling” twitter.com/guardiolatweet…
1 Like
Calum 11 December 2017 01:05 #19

Jose the cunt went too far this time.

He hurt our Mikel