This is a total myth though. Get into a car with a pissed up driver and tell him to take a tight corner at 90mph, what could go wrong?

Sharky and George got cancelled, too.

Sharky and George got cancelled, too.

Worse than that, when Prince Andrew got married they completely cancelled both BBC and ITV kids TV to show the wedding. And that was the only kids TV you had back then.

Exactly. If they want the harassment to stop and live some kind of low key “normal” lifestyle then why don’t they shut the fuck up instead of always giving these interviews. But they don’t they love the fame because at the end of the day all this shit does is help promote their brand, and help them make even more money. And it’s this kind of shit that makes you dislike the media even more, like why are these lot always being talked about? All the right wing papers always going on about them and all the SJW types and campaigners championing these two as if it’s some noble cause and there is no other actual issues going on in the world.

Their trying to turn these two into some kind of poor peoples champions, who remembers Harry going to a party dressed in full SS uniform? Like he couldn’t of picked anything else, probably thought he was funny walking around with a swastika on his arm.

The whole lot of them are bunch of privileged racist elitist snobs with a family history filled incest, murder, thieving and all other kinds shit. All whilst leeching of the British working people.

Put me in the camp that rather see the dismantling of the royals, but Britain seems to think it can’t live without them. For some reason.

I would personally rather see the whole institution and the lot of them go away for good.

Three Lions as the new national anthem if this happens?

Joking apart depending on the response the actual anthem could become a target of protest for sportsmen and women now and other members of society may feel uncomfortable with it.

People actually thought that her involved as a women of color would modernise and diversify the institution that are the British Royals.

Like it’s some random multinational. I really wonder what Harry and Meghan thought would happen if they didn’t get in line?

@RockyMaivia we have that same problem. The royal family apparantly is important in trade and helps making deals because of who they are. That shouldn’t be the point…

There’s lots of other songs that were made in Britain, as in them old 18th century songs. could use one of them or just write new a one and get people to vote on it an a referendum.

God save the Queen is still ideal

Is there a more dreary song than our national anthem?

I’ve never seen a royal wedding and have no interest in royal gossip but I do like the history of the royal family and their ability to stay popular with public, despite them being some of the most despicable people, for so long.

I’m astonished at how so many people believe the constant propaganda and treat them as special.
From Diana to Kate Middleton to Meghan Markle, none of them were well known before they married into the royal family yet, with no talent or personality, they go on to become idolised by millions and the media.

I didn’t even realise Mehan Markle was black until the racism issue started but, because a lot of royalists didn’t like her, I found it funny that they were so confused because she was royal and they couldn’t stand her.

After seeing the desperate attempts she and Harry have gone to about wanting to be private, while all the time courting publicity, I’ve gone off them.

But they both use the victim card way too many times to take them seriously.
They are two of the most privileged people, who don’t have to work and who lecture others on climate change, while flying everywhere with an entourage and leaving the carbon footprint the size of small country.

From Diana to Kate Middleton to Meghan Markle, none of them were well known before they married into the royal family yet, with no talent or personality

Someone has not watched Suits

You know you watch that for Harvey.

And also tbh Rachel too.

Donna for me, but I liked Markle in it a lot

Yeah donnas attitude was hot, though I always liked Katrina the most, she definitely wasn’t in it enough 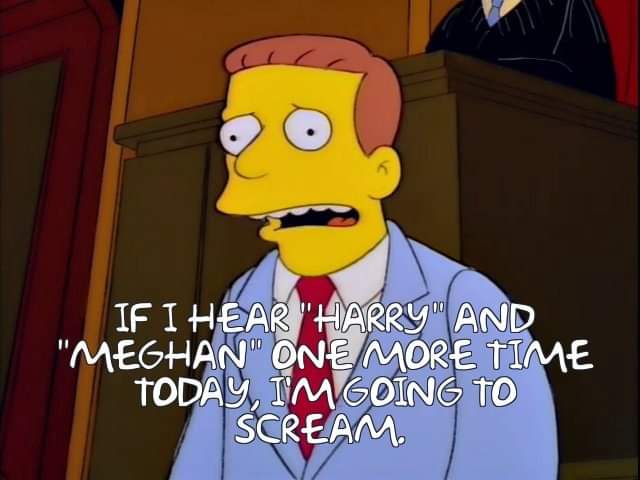 You got me, I LOVED Harvey

You’re right.
I’m guessing it’s the high brow TV series that Golden Globe nominated Markle was in before she became a gold digger.

I read that Melvyn Bragg, Martin Scorsese and several other intellectual giants of the film industry are big admirers of her work and a lot of them said her acting brought tears to their eyes.
So is it worth watching?

The first few seasons are really good imo, but then like every other big popular show it became formulaic, uninspired and ran out of ideas.

She was good in it though, and she became very popular off the back of it so I think calling her a gold digger is unfair.

She was good in it though, and she became very popular off the back of it so I think calling her a gold digger is unfair.

Is it really? Marrying into the royal family would have elevated her to a completely other level. Don’t think she would have gotten the deals she has gotten over the back of this all…