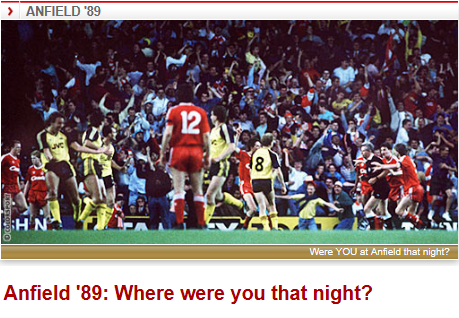 Friday 26th May 1989.28 years ago to the very day.
I was banned from every ground in the country, so watched the game in the gunners…Up until the ban id been to every game home and away…funnily enough i got my ban v Liverpool, 2nd replay LC at villa park and the last game i could go to was Liverpool at home just before Christmas, i also met Nick Mason that day and he signed my programme. That was at a local charity event where my mum gave one of my signed footballs to be auctioned without telling me… 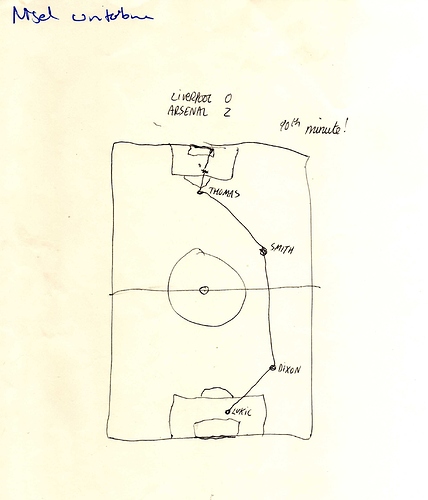 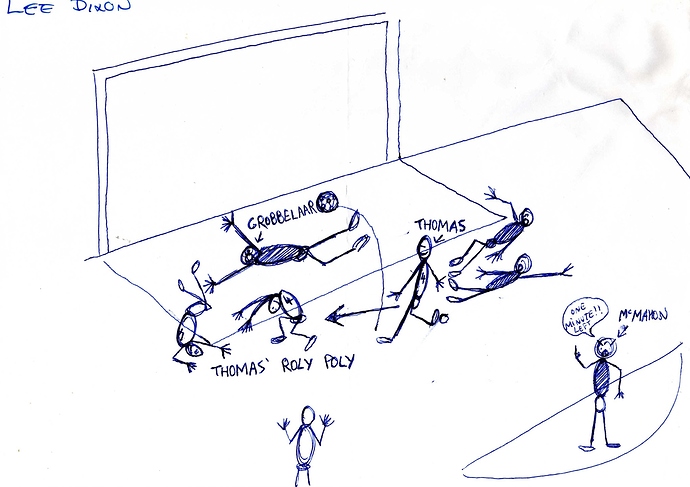 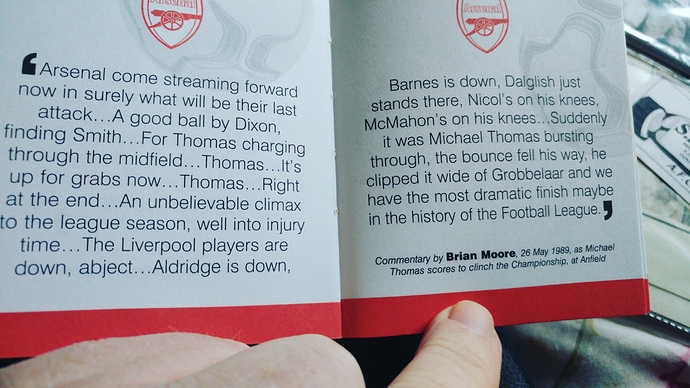 Read a quote from Dalglish recently asking if he thought Arsenal players presenting flowers was a cynical move on the night. Dalglish response was it was a classy gesture by a classy club.

Brian Moore: The clock shows two minutes to go. Arsenal fans imploring their
team with “come on you yellows”, they want that second important goal and
suddenly the break is on, Beardsley leading the charge. Aldridge in a perfect
position on the far side, but Lukic is there, he’ll want to get the ball
forward quickly. Richardson is down with a leg injury and he’s still down and
Arsenal want to go on. 41,783 is the crowd here at Anfield and not a soul has
left before the final whistle you can be sure. Treatment for Kevin
Richardson. Unless there is an amazing and dramatic twist now it looks like
Liverpool David.

David Pleat: Yes I think they’ve set out, they’ve been very professional
tonight, they’ve made certain of doing their job, they’ve defended very well
in the second half when Arsenal have powered forward in search of the second
goal. Barnes who has probably been as creative and as brilliant player for
them at times this season has been mainly defending this half and quite happy
to do so. And that will all be worthwhile if in a couple of minutes time they’ve won the Championship.

Brian Moore: Well there’s John Barnes saying “come on” as he shouts to his
team mates. John Aldridge over there. Lets just keep it going for a few
seconds more. Richardson is down again, presumably he’ll have to go off and
remember Arsenal have both their substitutes already on. One minute to go.
McMahon has got the word from the Kop obviously. But nobody knows quite how
much time the referee will add on. But there’s a real competitor, a man that
really has earned a Championship medal. <<>> The faces of the
players are something to behold at the moment.

David Pleat: I think in a way if Arsenal are to lose a Championship having
had such a lead at one time its somewhat poetic justice that they have got
the result on the last day even if their not to win it.

Brian Moore: They would see that as small consolation David, but has you can
see we are well into time added on. Just a few seconds away now for Kenny
Dalglish unless Arsenal can mount something absolutely spectacular in the few
seconds that remain. Nichols in there, Barnes is in there, Adams has stopped
him, Barnes has beaten Adams, Aldridge is waiting at the far side, Adams is
after his man but Barnes will not be denied, yes he will by Richardson
moments ago down and injured.

Arsenal come streaming forward now in surely what will be their last attack.
A good ball by Dixon finding Smith, for Thomas charging through the midfield,
Thomas, its up for grabs now! Thomas right at the end. An unbelievable climax
to the League season.

We’re well into injury time. The Liverpool players are down, absolutely
abject! Aldridge is down, Barnes is down, Dalglish just stands there, Nichols
on his knees, McMahon is on his knees, suddenly it was Michael Thomas, bursting
through, the bounce fell his way, he flicks it wide of Grobbellar and we have
the most dramatic finish maybe in the history of the Football League. The top
two challenging on the night, and the title possibly decided in the last
minute of the whole season, but wait a moment Whealan turning it in and
Thomas gets it back to Lukic. We’ve played nearly two minutes of injury time.
George Graham would love to get out there and play himself and so would Kenny
Dalglish, its agony for them and for the fans, as Liverpool now for so long
it seemed in command. Except! The final whistle. Arsenal the Champions. A
momentous occasion this for Arsenal, coming here requiring a two goal lead
and snatched it in the most dramatic fashion in the last minute of the game.

A hammer blow for Liverpool, for the likes of John Barnes who over the season
has produced football of the most majestic standard. David O’Leary helps
Aldridge to his feet and Aldridge wasn’t too happy with that. The Kop bravely
and gamely applauding their heroes. But the winners are Arsenal who have gone
over to their fans. And they came it seems without a chance, but the Gunners
have kept their powder dry until it really matters. They’ve denied Liverpool
the League and Cup Double, Arsenal the Champions for the first time since
1971, the ninth time in their history, the first team to win by two goals
here at Anfield since 1986, a super human effort against the odds and
achieved with that goal in the last minute by Michael Thomas.”

asking if he thought Arsenal players presenting flowers was a cynical move on the night.

Everytime i watch that i get goosebumps, sometimes even tears of pure joy

Have them even reading it to be honest.

There will never be another League win like that.
To go to the last day of the season, with the two top teams, then us having to beat the best team in Europe and win by two clear goals which no other club had done at Liverpool for several seasons, is unbelievable enough.
To do it with almost the last kick of the game just made it unbeatable.

But it was the first time the title was decided with the only two clubs that could win it, and it being the last fixture of the season, and the first time it was shown live on TV.

No other League title comes close to this, no matter how much Sky and the PL go on about Man City doing it.

We also had the most exciting win in the FA Cup as well.
The 3-2 win against Man U.
The last few minutes of that game will go down as one of the most dramatic in the FA Cup.

Wonderful posts all .
what an amazing night . Graham was oozing confidence before the game .
Best bit was Jonh Barnes wagging his finger mouthing '1 minute , 1 minute ’
I got pissed on Special Brew and cried for two hours . Awesome night .
Without doubt the greatest night in the history of The Arsenal and possibly of English football.
Man Shitty , not even close .

There was an air of poignancy and overall goodwill and sportsmanship surrounding the game, too, (the Hillsborough disaster had just occurred the month before) the likes of which we’ll never see again.