Wasn’t sure which category to list this under so move it along if there’s one more suitable.

Aside from the fact that we aren’t keeping up with the Jones’s with this crazy transfer window and the money being thrown about, whether you think it’s right or wrong, I think we and pretty much most football fans will agree that it’s getting stupid now. The money being paid for players, it really cannot go on, can it?
Why aren’t FIFA and UEFA doing more to calm thing’s down a bit, because whether you’re a Man City or West Brom fan this is now bordering on stupidity. Pogba who looks like he’ll be claiming the worlds most expensive player award soon is not even the best player in world football right now. Higuain again, the third most expensive transfer to date, isn’t even the best player in his position.

Also the situation with Real Madrid and Alvaro Morata, allegedly buying him back just to sell him on again…How is this even allowed?

What realistic solution do you guy’s think could be put in place to “fix” transfers? Because this whole spending a percentage of you’re turnover rubbish clearly is not working.

There’s not much UEFA can do really besides putting FFP in place (and possible restrict player agent power in some ways). The money paid by Sky (and the PL in general) finally fucked up football as we know it and there will be no way back.

I don’t think this will continue to last.

Right now all the players are getting wages negotiated before new TV deal revenue came in.
Now that agents wised up to it, with each contract negotiation, clubs will be left with less of this new revenue.
And soon enough lesser clubs will go back to 15-20m transfers at best.

Worry is how much bigger clubs continue to fuck the market for clubs a tier below financially.

The only way it changes is if people stop watching.

Yeah, it’s bad when put into context with other facets of life, but in terms of sporthe football isn’t out of touch with many others.

The popularity of it allows for this sort of money to be spent by clubs, and that isn’t going to change for a very long time. More money is now being spent on the likes of Higuain and Pogba, but if Messi or Ronaldo were sold nowadays they would’ve gone for at least the double of the Higuain deal.

There’s more money in football, but it’s still behind the NFL and the NBA. Putting caps on money that can be spent would only handicap the sport in relation to others.

You make some good points Will, but when you say that football is not out of touch, then I have to disagree.
Football has been out of touch for years now completely disregarding the “common man”
I was a season ticket holder for 15 or so years, now, as a member I can only go to so many games as I am priced out of most matches.
So all these players going for millions really are out of touch, and unfortunately I feel they are losing support all over the world, and sometime in the not too distant future, a big club, and I mean big like Liverpool or Chelsea will go under, that will be the start of the end…

NBA & NFL are very advertisement heavy and they are totally worth to TV channels. No wonder they shell out such huge contract despite not having as huge a following as football.

Apart from half time which is mostly filled up with punditry, There isn’t as much scope for commercials.

I doubt PL could justify as big a contract as NBA/NFL in future.

I guess that’s why Premier League games aren’t on ‘normal’ television. But behind a pay wall. In Europe/the Netherlands at least.

Yeah defiently! Out of all this the match going fans never benefit. Well, of course there’s potential for better players on show, but prices are continually rising. The clubs can easily afford to cut ticket prices, they just choose not to. The fault also lies with fans in part, if fans really did boycott then clubs would have to listen. The twenty’s plenty campaign is an example of when football fans can influence clubs.

Maybe football associations could do more aswell with ticketc prices, and limit the amount that can be charged.

I guess that’s why Premier League games aren’t on ‘normal’ television. But behind a pay wall. In Europe/the Netherlands at least.

Oh, didn’t know that.
That explains a lot.

Over here, we pay a standard amount of a Channel pack and that’s it.
I fear for my future…Yikes…

The whole ticket pricing thing has always bothered me. Of course tickets should be cheaper but it seems like such a first world problem when you really look at it. The world is full of global injustice but here in England we’ve got grown men disgruntled about the price of attending a sporting event that serves no other purpose than enjoyment.

I’ve always thought If you don’t like the price don’t pay, simple. Complain with your wallet instead and force a change in the market. There are plenty of cheaper alternatives out there to enjoy football. So many people would be better off redirecting their money elsewhere instead of basically pouring it away attending football matches just to cling to some deluded sense of supporters’ status as a season ticket holder.

It’s a problem because it excludes certain groups from visting the matches because of said prices. Or so are we led to believe.

By certain groups I presume you mean low income households?

Yes. But don’t you agree football should be accessible to everybody including season tickets?

Why should attending football matches be any different to anything else in life? If you can’t afford it, tough luck.

Football is pretty accessible to everybody anyway when you look past Premier League snobbery. There are plenty of smaller local clubs out there that can do with more support on match days, people should invest in them more often tbh.

Football has always put itself in the market as the peoples’ sport. Or at least to me. That’s why it’s strange to me, some of the people are excluded from it because of money. It’s one of the reasons why the atmosphere in English football is killed btw, daytrippers and tourists. I find it a bit weird to say that, essentially, if you can’t pay the fees for the Premier League, than fuck off too the lower Leagues? If you’re a local lad living in Islington you want to support Arsenal don’t you?

Maybe strang coming from a foreigner myself, Somethings in life just shouldn’t be measured by the market and supply and demand-principles, but that’s just my opinion. 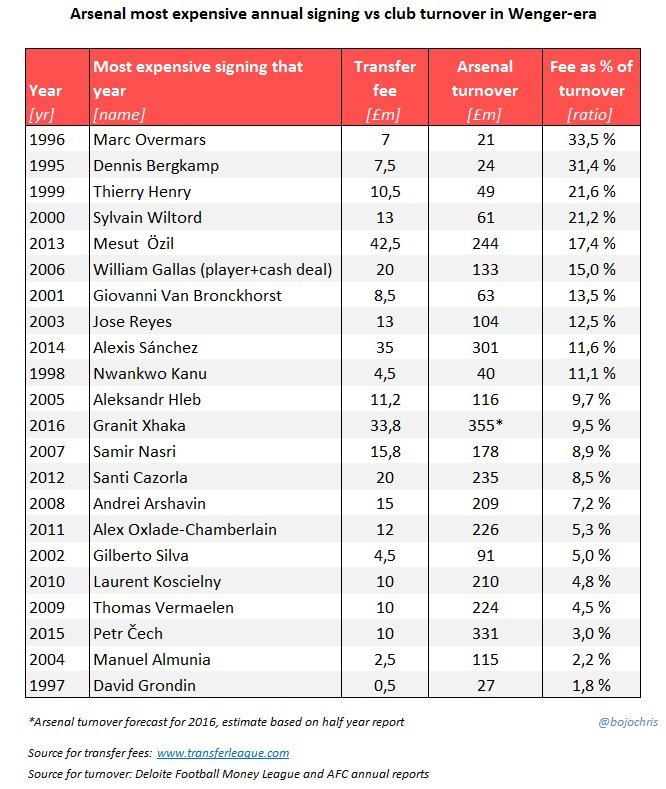 Compare the increase in turnover compared to the grow in the transfer fees. Football nowaday move insane amounts of money and it’s natural that club would want more money for some of their most priced assets.

Compare the increase in turnover compared to the grow in the transfer fees. Football nowaday move insane amounts of money and it’s natural that club would want more money for some of their most priced assets.

Be interesting to see the wages comparison too. Up up up up up i’d imagine.

Be interesting to see the wages comparison too. Up up up up up i’d imagine.