Hopefully we play a lot better than we did tonight. I think we will but West Ham are pretty solid team so I’ll say 1-1 draw.

These won’t pick many points up now and if we score first think we can score a few here. 3 1 win.

They’ll be tougher than Spurs were last weekend but we should be able to win this IMO. Need to avoid unnecessary fouls because they thrive on set play situations and we keep fouling teams needlessly. Nearly cost us the Spurs game at the end for eg.

Looks like Arteta has settled on his favoured CB’s after lots of rotation earlier in the season. Partey and Odegaard will come back in from the start, the only questions for me are if Saka is fit enough to displace Pepe again and who out of Bellerin/Cedric starts.

If we do well vs West Ham snd Pool and pick up say 4 points it’ll be interesting to see what we can end up with. That would give us 45 points after 30. Our last 8 league games have us play 6 in the bottom half including the current bottom 5.

I’m optimistically predicting a win but I think this will be pretty tough, maybe our second hardest remaining league fixture after Chelsea. Moyes has made them very tough to beat, they have some players of legitimate quality like Rice, Bowen, and Soucek, and they’ll have the advantage of the full week of rest and preparation whereas we are coming off the Thursday fixture. If we can match their intensity, I think we will win. But this is a team that takes points from you if they’re giving 5% more effort.

I think I like the same team from the NLD as long as Smith-Rowe is recovering well and not getting jaded again after two high energy games this week. Otherwise stick Willian in there.

Fucking hell lads. Where has this optimism been before? You decided to wait till West Ham away to show it?

I love how they’re 5th and you still don’t take them seriously.

We need a good performance here , as we need in every game .
I’ll have to listen to this game on the wireless as I’m having a days fishing .
COYG ,
2-5 to the Arsenal.

Nothing really to play for us. Just hoping to see a good, convincing performance.

The powers that be probably think Europa League football is to play for. On form we’re top 4, so it’s not unrealistic to fancy our chances of finishing top 6.

I think we’ll win today. West Ham aren’t all that.

I think West Ham have got more to play for.
They’re going for a top six place but we’re realistically only going to get in the CL by winning the EL so. for them, the motivation is probably higher to win.

I’ll go for a 1-1 draw with Aubameyang to score for us and Lingard for them.

Not necessarily. Win today and we’re only 4 points behind them and 2 behind Liverpool (who we play next game week). Think our remaining fixtures are slightly easier than West Ham’s as well. I just hope we don’t finish 7th and get that shitty Europa Conference place.

3-1 to the Arsenal. My mother in law is the only person in the family to not support Arsenal, she’s a hammers fan(her dad was from East Ham). So going to be a fun Sunday Afternoon.

Also Happy Nawroz to anyone who been celebrating it.

I’m feeling optimistic - Partey, EDB and Ødegaard have increased the technical quality of this team exponentially.

However, I end up being disappointed whenever I start believing in this club again. So really, this means we’ll probably lose, maybe a sending off or being denied an obvious penalty along the way. Ultimately, there will be a poor decision that ruins the game for us. Perhaps Auba will be demoted to the bench again, and he retaliates by dropping a couple of hench logs in Arteta’s desk drawer. Arteta discovers it and instantly recognises the subtle aroma of his captain’s faeces. No longer an anonymous crime, he seeks out Aubameyang, focuses his chi and drives a stunning punch right into the Gabonese’s solar plexus. A police investigation ensues, then court proceedings - a true media circus. Mourinho comes out and calls Wenger a voyeur. Arteta ends up doing time for GBH. Arsenal Twitter hounds Aubameyang out of the club. Willian continues to start games for Arsenal against all logic. The club implodes.

Life as an Arsenal fan for the last decade.

Not necessarily. Win today and we’re only 4 points behind them and 2 behind Liverpool (who we play next game week). Think our remaining fixtures are slightly easier than West Ham’s as well. I just hope we don’t finish 7th and get that shitty Europa Conference place.

I think because we’re on course for an EL final, that’s where our priorities lie.
For West Ham, a top half season would normally be a success but challenging for a top four place doesn’t happen very often so the motivation might be higher for them.

It’s true we are not far behind the clubs above us and if we win this game, as well as the following game against Liverpool, we’ll actually go above Liverpool in the PL.
Also, as you say, our games after that are against several relegation teams, so we could move up the table.

But, with top four almost out of our reach, I just think that our only realistic chance of getting a CL place is by winning the EL.

Saying that, if we do win our next two matches, a top six place looks quite likely, which its certainly didn’t a few games ago. 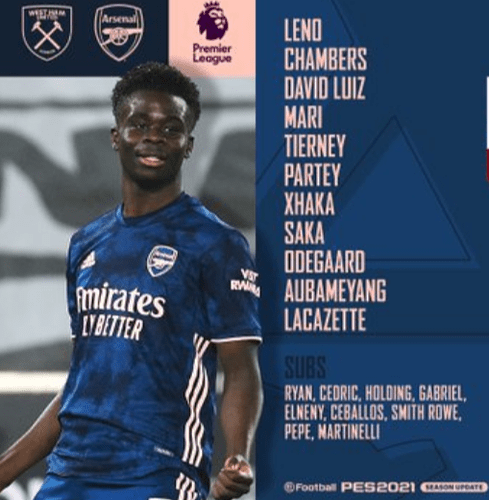 No Bellerin at all hook it into my veinssssssw