I don't care what state Arsenal are in, this is hilarious. https://t.co/pIZtu7SNtX 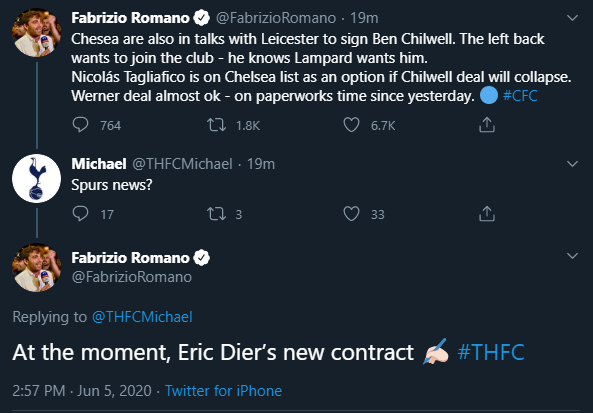 While some teams will be spending

It’s amazing how Chelsea’s transfer ban last summer has turned out to be to their benefit. Just sods law that it would work to their advantage.

As for Spurs, well it’s looking like they might have to sell one of their main assets if they want to do business this summer.

I dont think it was sods law on Chelsea. I think people overlook how good they are on transfers tbh.

I agree.
Although they have bought a lot of young players in recent seasons some have gone on to have good careers even if not at Chelsea.
They have sold some players for massive money while we give our decent players away for peanuts.

As for spurs, I can’t wait to see Mourinho having to cope without spending.
That’s not something he’s used to doing.

At least he has a ready made excuse, though. Should have a bet on how many times he throws his players under the bus. “Well, look at what I have to work with. All our rivals spend money. I have to try and make Eric Dier look like a competent footballer”

I think you’re right, he’s in an ideal situation.
He’s taken over a squad that was clearly not trying under Pochettino and although he has some decent players, he hasn’t got Eriksen and Kane doesn’t seem happy there.

So without substantial financial backing to freshen up a group of players that have been there for several seasons, and that are stagnating, it’s going to be a difficult job for him.
But he has got a ready made excuse if it goes wrong, as well as his 15m a season wages, to make having to work under Levy a bit more tolerable. 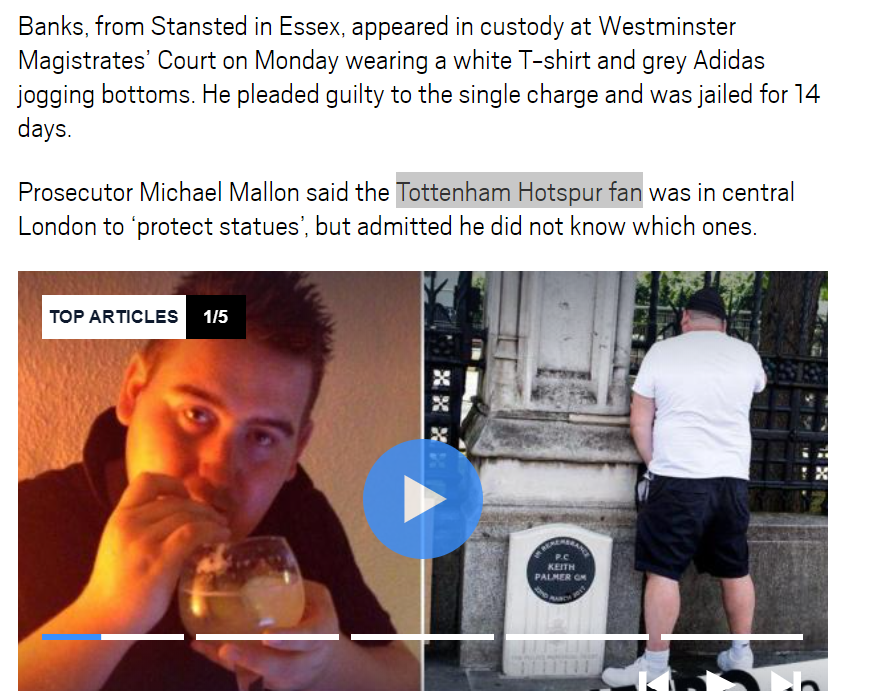 No particular sympathy for the guy, but I’m not sure about custodial sentences being handed out for one instance of pissing in public lol

The courts come down hard on anyone invloved civil disobediance. See the riots/looting in 2011 and the type of prison terms they were getting

Is 14 days the most they can give for a piss?

I do feel for him a tiny bit. I bet he thought he was being the height of bants by pissing on parliament and wasn’t aware he was pissing next to a memorial of someone he’d probably say was a hero.

You’re in London downing cans of Carling with the football lads and McDonalds are closed, what do you do?

so not just tourist who use McDonald’s for pissing in Europe.

The courts come down hard on anyone invloved civil disobediance. See the riots/looting in 2011 and the type of prison terms they were getting

This is true. I was living in East Ham at the time and we heard the high street was being a looted, I was chilling having a smoke with some friends and we decided to drive up to the High Street to see what was going on. One of my mates got out the car and went through the broken back doors into the Argos, and nicked three cheap pairs of headphones. I didn’t even get out if the car, I noped the fuck out, I was curious to see what was going on but wasn’t willing to get my face on camera as part of the crowd. I saw one guy I knew from school dragging a tent down the road, he’d popped it open inside the argos and then loaded up with goods. It was absolute madness the likes of which I’d never seen in my life.

Anyway, a month later we saw our mates face on the wall of shame centre spread in the Newham magazine, which was sent to every house in the borough, and someone clearly dropped him in it cos he got nicked two days later. Got a three month sentence for nicking less than fifty quids worth of shit. Absolute mug, but they definitely made an example of him and other who got caught lol. Same here, fourteen days in prison is clearly disproportionate.

You’re in London downing cans of Carling with the football lads and McDonalds are closed, what do you do?

Its not something I do regularly lol, but fucking hell, the amount of drunken pisses I’ve taken on central London streets over the years. Who knows how many memorials could have been pissed on if there are many others of that size and prominence?

I’ve got reservations about public shaming and how it can often be quite a cruel and unusual punishment for misdeeds, so that isn’t the inspiration here. But don’t give him a prison sentence, give him a fucking bucket and a sponge and make him go and clean the memorial and the surrounding area where he took a piss. Call it community service. It will quite literally right the wrong and it’ll save the pointless waste of taxpayers money that jailing him would represent. Don’t publicise it, just get him to clean it up and pay a fine or something, that’d clearly do.

I think people should be sent to prison for one or more of three reasons: rehabilitation, punishment and to protect the public. I don’t see that this meets any of the criteria.

saw one guy I knew from school dragging a tent down the road, he’d popped it open inside the argos and then loaded up with goods.

Not that I defend this kind of behaviour, but that’s a pretty genius idea

Haha, I refrained from adding that, but I have actually always admired the ingenuity

He didn’t get caught either, because unlike my moron mate he made sure he covered his face.

I agree with the above. Prisons should be a haven for rehabilitating criminals. Unfortunately our prison system is pretty shit at that. I know I’m changing the topic completely now in typical OA fashion.

A guy like that is more likely to come out of the justice system more damaged than he was prior to being shoved in.