French Andy Caroll with his acne infested face and a NOSE bigger than the Eiffel Tower. Its like people just forgot he lost us the tilte in 15/16

One of Wenger’s worst sells. Also, it’s frustrating to see him use so sparingly for Chelsea and yet I’ve seen no murmurs of discontent unlike when he was at Arsenal. Alas.

One of Wenger’s worst sells.

One of Wenger’s worst buys, too.

One of Wenger’s worst buys, too.

Hoooly shite. We went from Van Persie to this lump of manure. Elite technical ability and predator like finishing to useless french rotten meat.

He seemed nice to have around the camp. Seemed a bit of a cheerleader and appeared to love the club, even until his last day.

Other than that, if we sign someone else with the van Cunt money, that replacement is getting more than 105 goals, in my opinion.

that’s a good signing in my book.

Don’t waste your time. The maturity level of some of these posters is pretty low.

I don’t like Giroud but he represented amazing value for money for what we paid and what we got. It’s farcical to suggest otherwise.

And some of our fans think Lacazette is better/offers what Giroud did.

Yeah, not just that, they blame Giroud for us not winning trophies.

It’s weird. It’s like they’re saying that he is shit, but he is also amazing and could have won us the league and Champions League. I’m confused.

? Just saying it was a good goal lol. Give praise when its due

Giroud remains one of the worst signings Wenger made (and this is coming from someone who used to be a fan of his while he was here) Lacazette is bad given what he promised and what he’s actually delivered.

And some of our fans think Lacazette is better/offers what Giroud did.

Giroud was what he was. A 15 or 16 goals a season striker. Was always good as a plan b and backup striker. In that 15/16 season I think he scored 16 and assisted 6, and in fact was spot on as far as his expected goals scored, don’t think he’s to blame for us not winning the league that year. I think I’d blame that more on Santi missing almost the entire season and Ramsey being absolute shit positional wise.

But yeh insanely wild decision to pay 50m for Laca who’s just as slow as Giroud with none of set piece or heading ability. Absolute zero reason to spend so much when we had Giroud and Theo which Laca was not an upgrade on whatsoever but Gazidis gonna Gazidis.

Not been watchable since 2015.

Really sad state of affairs than Arsenal supporters wanted both he and/or Mourinho’s cancer football here.

Not been watchable since 2015.

I’m surprised you even game him the 15 mins yesterday.

The technique on that strike is just beautiful, one of the greatest FK takers of all time, if not the best.

Atalanta should win their game vs Madrid… 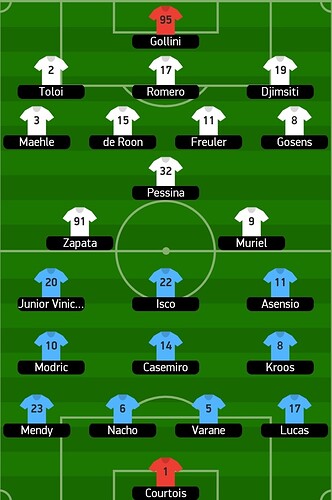 What in the fuck has happened to Madrid

How did a club ike Real Madrid end up with Benzema as the only goal scorer in the entire team? Craziness.

And why the fuck did they loan both Jovic and Borja Mayoral when they had no backup striker?

Good, hopefully La Liga is a dumpster fire for about 10 years at least.