IMO there has been definite on field progress this season. Not all results or performances were acceptable and missing out on top 4 is very disappointing, when it was achievable but it was the best overall we have looked in 6+ years.

What are your expectation for next season? in terms of tangible accomplishments?

Well I guess a combo of him and Wenger…I didnt make the graphic and havent double checked the accuracy, but undeniably the wage bill has been reduced massively this season.

the wage bill has been reduced massively this season

I definitely think Chambers and AMN could contribute more than Tavares and Sambi.

We have at least made progress one front. As pissed off as everyone is nobody asked for Wenger back. Might just bank that as a OA trophy tbh.

Nobody? I think a certain someone would entertain the idea…

Well the time frames passed. 2 days on it’s not allowed now. My rules.

Unreal if we have halve that wage bill to 44 mill or so, then we can get relegated and still be satisfied.

Yeah waa kinda thinking the same. No CL football so cut the wage about 50m and call it a day, everyone in KSE land is happy. Arteta complicit in all this for sure because no ambitious manager agrees to this.

The figures are completely made up.

You get the point.

And just in case not, here is the Swissramble version up to 2020 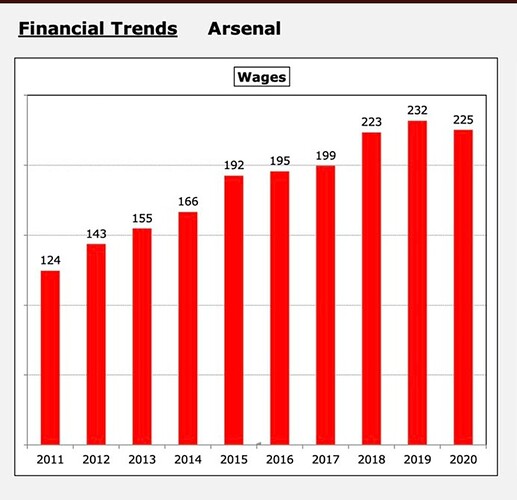 Except that halving the wage bill will assist in signings for the summer.

It seemed clear to me that the board were not targeting top 4. January was skipped and a decision was made to further clear out. I can only hope with the intention of strengthening in the Summer.

Will have been an impairment figure/write off as opposed to salary, but do get the point. Binning off Ozil and Auba has drastically reduced the wage bill no matter how you look at it

Get moving Arteta and Edu.

Yea but not anywhere near the levels that image suggests.

It seemed clear to me that the board were not targeting top 4.

This pretty much illustrates the board’s lack of urgency and ambition.
What other top European club would tolerate such mediocrity for so long?