Nah, Roma are taking the piss today.
Fiorentina wiping the floor with them.

35 minutes in, heavy breathing and hands on their hips.

Roma putting their eggs in the Europa Conference basket. Risky. Because as it stands, Fiorentina are level on points with them in the league and could take that Europa League spot off them.

Don’t think that’s what Mourinho intended but the players are just gassed.
Big summer ahead for Roma if they want to challenge next season.
Squad is awful. Needs a massive purge and investment.

Great penalty to make it 2-2

Edit: Inter got a third from another penalty. Oh dear Juventus.

Juventus have a lot of work to do, very poor season by their standards.

They should have won but some very dubious decision making cost them the Cup.

Allegri went defensive too so that invited pressure from Inter and he also never subbed on someone like Kean who could have contributed to the counter. He also removed Zakaria for Locatelli which was a silly sub

Isn’t that how Juve fans always feel though?

Isn’t that how Juve fans always feel though?

I’ve heard many Juve fans say this for years,and once again it’s another case of sour grapes from their fans saying Inter are always fixing things.
Allegri fucking up again going defensive and throwing strops when under pressure is always a joy to see though.

So weird seeing Niles with a proper beard. Man looks like he came out from from the 80s.

Insane stuff at Stadio Olimpico.
Roma must’ve had about 50 shots in this game. Hit the woodwork 4 times too.

Serie A is the only interesting European league. It might actually go down to the last round of fixtures.

Unlike the boring PL, Bundesliga, Ligue 1 and La Liga.

What was their XG? @GC-Maniac

I thought you guys were joking. What the actual… 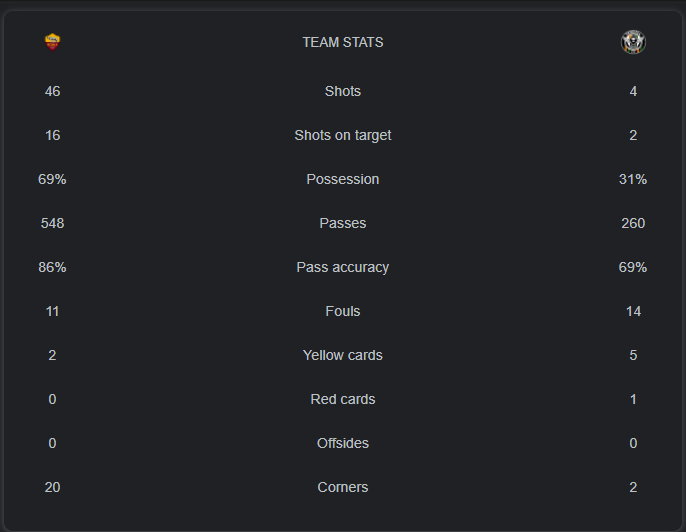