That’s quite bold saying Pepe will hit Zaha heights down the line. Maybe I am rephrasing unfairly, sorry if I am with that, but what Zaha has done when he has been in form has been pretty magical, and against big clubs also. It’s just that Zaha tends to go in and out of form, and tends to be a bit moody at times, maybe in part because of a chip on his shoulder after making bad decisions in his career (even though by normal human being standards he is a successful rich man, etc.).

As soon as he leaves hes gonna start banging in goals for fun, its so obvious. Arteta is aids to attacking football.

Actually u can cure aids these days with an aids cocktail but Arteta is way worse than that tbh so hes honestly more like attacking football ALS.

you’re aids to this forum

He might well do so outside the PL, but in the PL you can’t get away with being so one footed as an attacker, defensive units have the talent and coaching to contain such players, and such players can be liabilities with lack of tight ball control, which is why he rightly isn’t getting starts (in the PL). 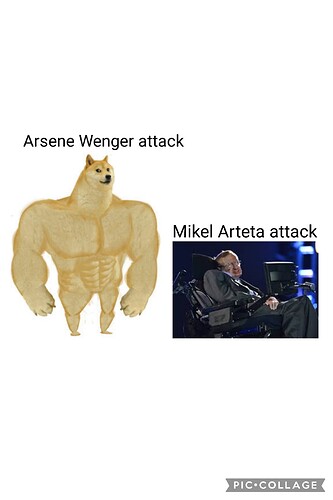 Anelka, Bergkamp, Henry, Adebayor (for one season before he fucked off), van Persie…. in this there is more evidence of how crucial the CF is because otherwise attacks with just Theo, AOC, Nasir could often get stymied, particularly by “low block”. I was angry the summer we stopped at 40m+1 for Suarez, because I think we could have got him if we went 5-10m above that, instead of pissing Liverpool off about doing bare minimum over a release clause we weren’t supposed to know about.

We need a marquee CF signing this summer, but yeah, Wenger was/is a legend, not knocking that.

Wasn’t a world beater at Chelsea but had some key moments from memory. Although I’m trying to remember from a long way back lol.

I was angry the summer we stopped at 40m+1 for Suarez, because I think we could have got him if we went 5-10m above that, instead of pissing Liverpool off about doing bare minimum over a release clause we weren’t supposed to know about.

I believe what the Scousers did was illegal. Just like how we triggered Partey’s clause, we did everything right in trying to purchase Suarez. Why even the need to offer more? The Scouse cunts frightened us off, they were the ones disrespectful in the process (“i don’t know what Arsenal are smoking down there…” fuck off) and showed themselves up for the total cunt club that they are.

Simply being one footed won’t necessarily spell doom but when you add deficiencies like Pepe has in the mix you’ve got a bust on your hands.

I agree Dave. You don’t go and buy a car and pay more than the listed price for it. I’ve enwvr understood the whole we should’ve offered more when his release clause was what it was, Where’s the logic?

I personally think Pepe will thrive if he joined a team better suited to his abilities. I don’t really buy into all of that league specialisation stuff I think so long as your team plays how a player needs and in a way that gets the best out of said player then he will thrive.

I think what Pepe really struggles with is the system, the lack of confidence and also math e environmentally he hasn’t adapted to England.

I think it’s been proven that there was no release clause and that Wenger had been misinformed into believing their was one. It was simply a gentleman’s agreement that Liverpool would have to let Suarez know that a club made a bid for him

(Everyone is up so early today)

Since when has has a footballer getting a new agent been worthy of announcement?

This is probably the highlight of his season, how embarrassing.

And it was only a starting offer in order to trigger the conversation. It was never meant to be the final offer.

But Liverpool got butthurt because they were about to lose their star player, and chose to publicise the opening offer as if it were the final offer. The rest is history.

No one at the club thought that it was a release clause.

He still has 2 full years left on his contract.

Need to try and sell him for whatever we can this summer. Waste of a squad space because the manager doesn’t fancy him. Pointless him being here.