White almost operated as a third CB at times with how much he’d tuck in and it’s clear as day that the club knew that Zaha was ineffective when actually faced with needing to use his head to do something with the ball.

He’s a tricky wide man who relies on moments of brilliance but if you put him in positions where he needs to think about his next move he just reverts to his predictable dribbling and crossing.

Jesus is one of the best pressing forwards in football and we never tasked him with chasing Andersen down and closing the angle. We wanted that pass and we ate it up all night. 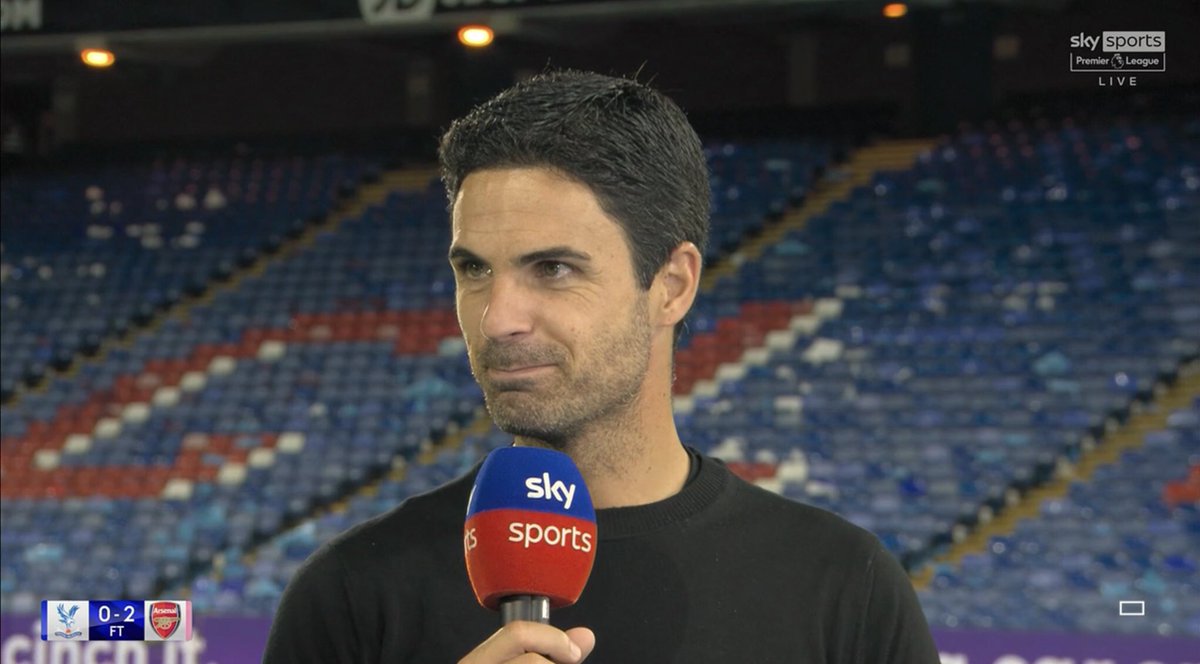 I actually think that aligns well.
We honestly rarely draw. It’s often “All or Nothing” with us.

Not as impressive as it sounds when Chelsea, Spurs and United have all had managerial changes in that time.

He’s probably the third longest serving manager at this point.

That’s what I thought initially that but then I processed it a bit more and he definitely isn’t.
I was expecting Rodgers and Moyes to be higher instead.

If you really think about it actually makes sense. We rarely draw. It’s win and losses with us.

So what do we think going forward after Friday of our waiting till late of substitutions.
Surely we have to trust in the bench and the 5 sub rule is going too become part of the game now.

the 5 sub rule is going too become part of the game now.

I think you’ll find this wont be used as much as predicted.

It got Liverpool a point yesterday. Ignore it at your peril.
Friday night was crying out for it tbh.

They could have made a single substitution and it would have had the exact same effect.

No idea why Nunes didn’t start.

We will need it more later in the season, as in we will start utilising it more frequently and earlier in the game by then. Probably. And won’t benefit from it nearly as much as shit clubs like City or Chelsea for example. But I don’t think it will make a difference until what would normally be the Christmas fixture congestion but what is now the World Cup and so I guess after that.

Fully with you on that. Just like we saw with 5 subs before, some teams will choose not to use them all.

In our case against Palace, our choices weren’t particularly good and any changes could have destabilised the team a bit.

I think the 5-sub rule will be abused by teams like City and Liverpool when they thrash opponents at home for example. I hope we’ll be one of them as well.

Well not really because Liverpool made 3 subs at 1 0 down and another at 2 1 down.
There would of been a huge outcry on here on Friday if we didn’t get over the line.

Kinda proved my point though, doesn’t it?
Even Klopp who needed to change the game didn’t use them all.

In our case against Palace, our choices weren’t particularly good and any changes could have destabilised the team a bit.

I hear you and I do agree to an extent.
However, I don’t agree with our choices not being good.

We did have options to consider

But it was Nunes who made the difference. They could have only brought him on, and I think the outcome would have been the same.

The issue with those moves is that the 3 latter options you suggested is that they’re ball passive. And once you make them, you kinda settle that you’ll have to defend whatever the score is.
If Palace scored we would be then fucked.

I think ideally Arteta would have liked to sub off one of Martinelli or Saka but he doesn’t trust any of his choices on the bench. I think Odegaard or Xhaka would have also come off if we had better choices.

The way we played in second half, it felt like we did prioritise defending the lead more than extending it.

Yes, but in case they scored we could have reacted to it with the players on the pitch.
If we made the call to change formation and be more passive then our bed would’ve been made.
You’ll then have to make further changes to make the system more attacking and we would be fucked.

Arteta given Arsenal sack warning by Gallas: Get top four or you're in...

William Gallas has warned that Mikel Arteta could be sacked if Arsenal do not finish in the Premier League top four.

“Of course he will be in trouble. Arteta has been asked to make the top four and he didn’t do it last season,” he said.

“They have just bought new players, it’s in the hands of Arteta and the players. It will be a big problem for all of them if they don’t do their job to qualify in the Champions League.”

What is my brother smoking here?

Shut the fuck up Gallas and never speak of our club again, we could not be less interested in your opinions.