Mike Riley and his Cabal of Cunts

The challenge was so bloody stupid that I don’t blame the ref for giving him the benefit of the doubt and thinking “he must have slipped, surely no one is that much of an idiot”

I prefer them to view the evidence then make a determination myself.

I guess the theatre of it all can be entertaining.

No literally got nothing to do with that.

By the way @Kroenkeoutplease @The_Invincibles were they showing replays of the tackle in the ground during the VAR check?

This is the thing. Whenever the ref goes to the monitor, he changes his decision. Sometimes, the initial decision is right but VAR has other plans.
Only one referee last season didn’t change his decision and he was banned for 3 games!

Not during the actual check. Think they did after.

On the matter of slip it didn’t remotely look like that from my viewpoint. It looked like he launched himself two footed at Martinelli who’d been giving him a royal run around up until then.

It was as clear a red as you can see even from the other end of the ground. All three of us couldn’t understand why the red wasn’t given instantly. We just assumed the ref bottled it feeling perhaps sorry for Leeds. It was so reminiscent of the Diaby, Eduardo and Ramsey leg breakers. I was so relieved when Martinelli got up and if his leg had been planted that could’ve been his career as a top player pretty much done in that moment

Yes they did, only once and can’t recall them doing that before with a sending off…However, need to caveat that by saying the screen is to my left so not always paying attention to the replays during the match.

I’d really prefer if we could (a) hear the refs when they’re speaking to VAR and (b) have that on the screen in the ground. I think we can see it at home in real time but idk if the ground can see it. They really should have to justify their decisions over the PA system the same way other mic’d up refs do. Even NBA games have refs mic’d up. It takes the mystery out of things and would potentially expose some of the bad decision-making.

It’s a joke that the refs don’t explain their decisions or aren’t allowed to be interviewed after the game. It holds them back from the scrutiny needed to improve and it’s quite clear Riley doesn’t do anything to improve them behind the scenes.

It’s always like Old Trafford when the unbeatables got beat with his shitty refereeing adding about 2 players worth to Utd that night.

And fucking Neville and his wanky biased punditry can fuck right off too.

Man I’m in the exact same head space as you are. Mic them up and take the ambiguity out of their decisions.

Though if I’m being honest. I’d love to see what they’re told before a game.

I think we’d also see very quickly that the refs speak to certain players differently than others.

No prizes for guessing which players may get treated better.

The Penalty was a farce.

Holding getting sent off the ref got right.

And fucking Neville and his wanky biased punditry can fuck right off too.

Did you hear him whine and stamp his feet in commentary seconds into the game when Nketiah went down in the box?

“Whyyyyy aren’t you getting yellow cards for diving any more?”

Both the penalty and the red card were blocks that in another game could well have been ignored by the ref completely. Penalty was one of the softest I’ve seen.

For the red, if Holding stands still its not even a foul. Its just the slight movement back towards Son that does it, but bearing in mind Son’s never getting to the ball he could quite easily have just given the free kick.
At which point if Arteta has any sense he subs Holding for White and it’s a different game.

Also saw a challenge where their playing stood on Saka’s foot, and he gave the free kick the other way.

“Whyyyyy aren’t you getting yellow cards for diving any more?”

This was like 10 seconds after him saying Nketiah wasn’t making any complaints about the challenge, that in itself should prevent the yellow

*One was a yellow card not that it completely invalidates the sentiment.

@AFCJake2
One was a red card, one wasn't even a foul Different rules for Arsenal🤷‍♂️ https://t.co/6gztUgn30i 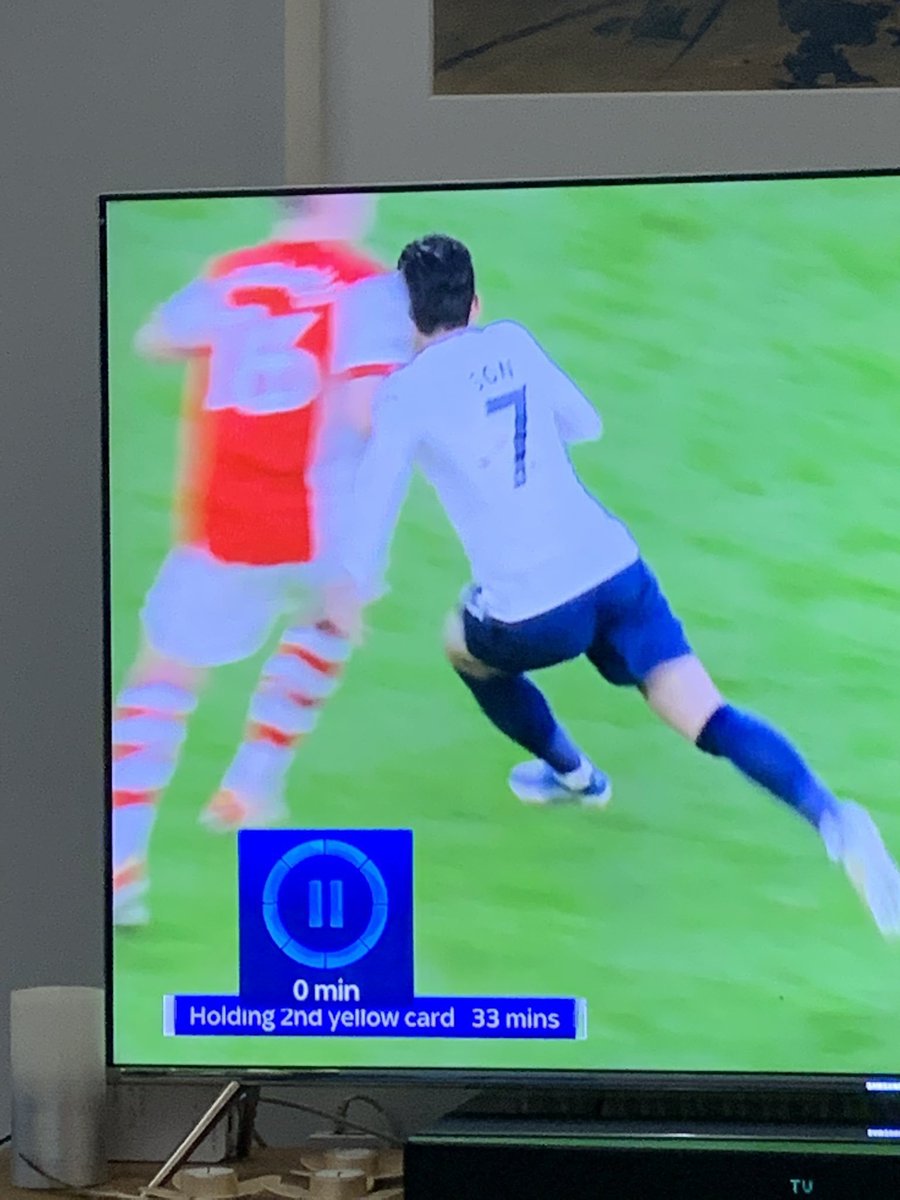 Ref body/refs as a group appear either corrupt or inept, has very little consistency with decisions often even in the same game, with no sign of improvement on the horizon…

This is not just in Arsenal games, this is watching PL games and decisions in many games

Ridiculous penalty for the Scum today. It’s like the refs are biased in Scums favour. A fucking joke. They’ve been completely shit this week.

Ridiculous penalty for the Scum today.

Was it? I’d be pretty upset if that wasn’t given for Arsenal.

I know he was chasing after the ref asking where he was supposed to put his hands/arms but I didn’t think he had an argument that he was trying to steady himself.