On this day in 2014: Arsenal announced the signing of Kim Källström on a six-month loan from Spartak Moscow to ease an injury crisis in midfield. Källstrom, who only played four games in total for the club, made his debut 52 days after signing following a back injury. #afc https://t.co/3YOaMpOmny 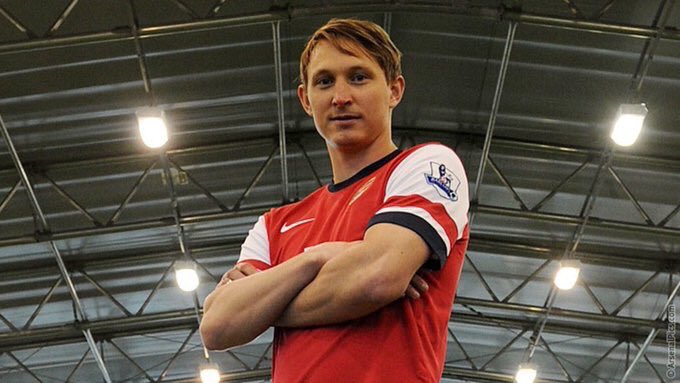 On this day in 2014: Arsenal announced the signing of Kim Källström on a six-month loan from Spartak Moscow to ease an injury crisis in midfield.

Only Arsenal would buy a player to ease an injury crisis that was already injured.
This, along with Bischoff, rank as the most pointless and unambitious transfers we’ve made.
We needed quality to walk into the first team to give us the chance to win the title but the best Wenger and the board could come up with was this uninspiring pile of mediocrity.

This is a true Arsenal legend.

This was why I thought it was unfair to put Ozil in the former gunners section. How can you compare his contribution to a giant of club history like this?

Bischoff was a free transfer and came with a decent reputation as being a potential talent but had some injury issues. It was a short term punt.

One of my favourite players in the Emirates era. Saucy left foot.

Throwback. I’m sure most of us have seen Kim K’s recollection of his time at Arsenal and of course the semi-final pen versus Wigan…if you haven’t, you’re welcome.

Too long to copy and paste it all.

"I look like a boy as I walk across the grass, with the ball under my arm. Well-groomed side-parting, a clean red shirt, white sleeves, and a golden cannon on my breast. I’m a man past thirty years of age, in a boy’s dream. It’s the semifinal of the English FA cup, against Wigan, with 82,000 people on the stands of Wembley Stadium, among which 50,000 root for us.

They are loud and starving fans that hunger for a title. They haven’t won anything for nine years, which is an eternity for a club that is considered one of the greatest in the World. They have the most loyal fans, gooners. By strange and unexpected detours, I’ve ended up at the top club Arsenal, in north London.

With straight legs, I bend down and put the ball on the spot. I throw a quick glance at the keeper. I’ve already decided where to place it. I try not to smile. The moment is here. I’m here - in the middle of the latin motto of the club: Victoria Concordia Crescit. Victory grows through harmony. I can’t help myself but smile slightly. I haven’t even played half an hour for Arsenal. I debuted against Swansea, for eleven minutes, and now I was substituted on in extra time when it was to be decided. Fifteen minutes of a footballer’s life, which changed my story."

We needed ready made quality and a couple of top quality signings to play alongside our few elite players to get us challenging for the title.

We already had the worst injury record of almost any top club in Europe and yet we bought two players on the cheap, who Wenger knew already had injury problems.

The signings of Kallstrom and Bischoff, no matter how cheap, are the perfect illustration of our lack of ambition and the main reason every top player we had at the club, left us to go elsewhere.

Just for that peno he really is an Arsenal legend. That was such a fantastic moment after having watched for all those years and all those heartbreak to finally get a moment of ecstasy like that. At that point I knew we were winning the FA Cup even tho it was just a semi.

Next up for his former Gunners thread

He certainly is a former Gunner, after just scraping in with a few minutes of playing in an an Arsenal shirt.

Then we can have Denilson.
I remember him being described as the only Brazilian footballer who plays with no flair.