FA Cup with Portsmouth was kind of insane in the context of his career, UCL with Ajax obviously, the hat trick against Chelsea.

Great call. Look at that Argentina team who won silver and Brazil who won bronze.

Playing with a heart

condition and still playing better than our current squad !!

Arsenal History From Highbury To The Emirates

I think it’s either Harry Redknapp or Merse talking about Kanu at Portsmouth….?
It’s a great listen .
Try and find it .
Kanu was a brilliant player .
Fabulous chant too

I watched Kanu’s goals whilst on a treadmill the other evening and what a gifted footballer he was . Some of his finishing he made look so easy . It was refreshing to see a striker swap the ball from left to right and bang in the net . Fabulous player

Well , once again another night without any sleep .
So I decided to watch some old players . For some reason Kanu seems to be the one I go to first .
What a fabulous player . Some of his touches are just sublime . Kanu was so quick footed at times he was unplayable.
Brilliant player.

I can remember being mesmerised when a bit of quick footwork and skill set Anelka up in Kanu’s away debut for Arsenal at Old Tartford in 99.

He just dropped to his kness to celebrate. 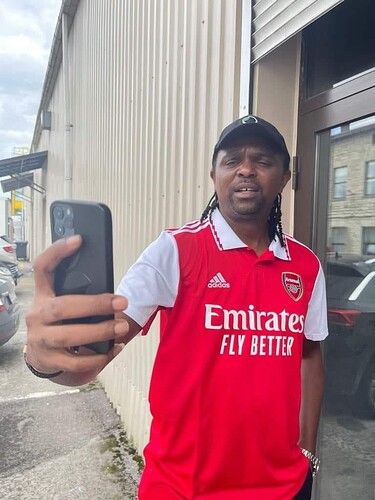 Looking good for a man in his 60s