Hopefully he gets a start vs Villa then, I’ll watch on keenly with interest given I have an RDO Monday.

Didn’t watch the game vs Molde but saw the highlights and Willock looked a real handful. Caused them a lot of problems with his runs down the middle, the right, the left, basically everywhere. Took his goal well too.

Having said all that, I will reserve judgement for when I see him doing that in the Premier League. Whatever I have seen of him in the league, he has been very inconsistent, with some poor decision making, poor technique at times (especially when shooting). Would like to see him get a few minutes against Villa but am not sure about a starting place.

It was a real noteworthy performance from Joe.

He’s another player that seems to have a great engine. He was still harrying high up the pitch in the latter stages of the game and always posed a threat driving into the box, very Ramsey-esq.

I’m a big fan of Joe and think he’s the kind of player I’d want in a midfield 3 or at least to be squeezed into our line up from time to time.

I can understand why people are questioning his sudden rise but the lad has looked great in every game he has started this season.
Be it against Molde, Liverpool or Leicester.
Some of our starters haven’t done so in the same matches or against worse opposition.

My gripe with him towards the end of last season was that he was going invisible whenever he was given the chance to start whereas when he he used to come on as a sub he was more effective using his athleticism against tired players.
Now he looks to impose himself from the get go and throughout the match. Plays like an absolute powerhouse of a midfielder.
Really excited for him.

Don’t understand how this works now. You’re supposed to be rewarded for playing good, and punished for not.
Give him a chance Mikel, ffs.

This was positive to me getting up at 330am, was curious to see him after a lot of you were raving on about him after the Europa League games.

Yes against EPL opposition he is still shit. 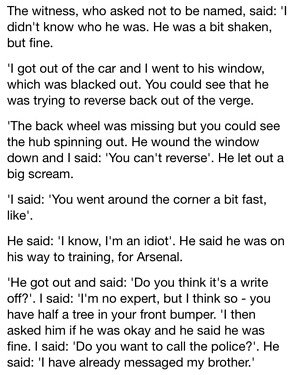 Saw that too. Christ, that could’ve ended bad…

How has he managed to spaz off track like that? He was literally in the left lane safe as houses it’s not as though it was some sharp turn. If that’s not a major mechanical fault or a very unstable whip that’s just absolutely shit driving. I’ll never own a G-Wagon or any fat fuck off motor like that so maybe I’ll never know certain aspects but I can barely sympathise with this shit if it’s his fault.

The G-Wagon is notorious for being very unstable and prone to toppling.

I’ve heard a lot of people feel really unsafe driving them in anything over than a straight line so this does not come as a surprise.

I hope he learns a valuable lesson from this.

Balling again tonight.
He should retain his spot in the PL, there others who need to be dropped first.

Sorry, have to disagree…He showed the other day that he is not first team material…Squad player perhaps, but no more…

Right, because the other senior PL players in our squad have been performing at the level required.

I prefer sticking with Willock who has actually shown something positive this season.

Yup, a game in which he DID NOT start, and DID NOT get on…Sadly, an unused substitue is his best position.

I don’t get the point here.

The point is, he is not good enough, or ever will be, to start for Arsenal, even though I do agree with you that the rest are not anything special, please do not say that Willock is the answer…because he isn’t.