Martinelli quickly became one of the few players that I don’t worry about if he doesn’t score or assist, his contribution to the general play is immense, and it’s clear that opposing defenders consider him a threat that needs constant marking, leaving up space for Zinchenko and Xhaka on that left side.

T f, those stats take into account his whole season, and he started the season tremendously.

I think the problem is just that recently he’s dropped off and defenders seem to have figured him out as well.

Drop-off came with the Jesus injury. And that’s just scoring drop-off. He has a big job on the left with very little help. He’s often isolated over there. Jesus would often swap with him, something Nketiah doesn’t do. Changes in personnel mean tweaking the system a bit.

Good thread in this: @Stillmanator
Seen a lot of comments about Martinelli’s form and think it’s worth considering the context around it. Firstly, Arsenal’s left-back is a central midfielder, basically. There’s no overlap, instead Xhaka underlaps for him and Xhaka is still using that space well (see first goal).
1 Like
GC-Maniac 23 January 2023 12:42 #2094

The drop-off was before that imo.

He looked fairly tired in late October (expected) and he was rather poor against Chelsea and Wolves in November. I remember everyone expecting him to roast Azpi but Azpi kept him in his pocket.

He was brilliant for Brazil in the WC, especially in comparison to other forward players.

Perhaps a big part now is that teams actually prepare for him much better.

I like both your points, I agree he did look tired already before the WC. He also has the youth rollercoaster form syndrome a bit.

But the attitude is still there, work rate is still pushed to the limit, I agree that one big difference between Eddie and Jesus is that Jesus creates a lot more space and chances for his wide players…

Martinelli probably needs more of that than Saka, who either mounts the world all by himself or he combines with Ödegård in that trademark pocket outside the corner of the box.

Not worried long term at all about this guy, just wonder if he needs a bit of rotation to catch his breath.

So we had him until 2026 anyway. He was probably one of the least priority contract extensions given how long we have him tied down for.

Saliba, Saka…let’s be having you!

Flashes tonight of what he can do to full backs. Great news on the contract.

Having Trossard is going to be huge for Martinelli I think, bit more rest and probably more opportunities to play 60 or 30 min blocks and just be a damn menace.

Yeah, came on pumped up. Great to see.

Would like to see Trossard left, Martinelli central and Saka right with Odegaard feeding them. We miss pace through the middle.

Was pretty energetic when he came on, looked our most likely Avenue to produce something for an equaliser.

Up to 180k a week apparently including bonuses.

Given he’ll stay on that for much of his peak of his career that’s fine. Probably means a 250k-300k deal later if he keeps progressing into a top winger.

Presume the new deal has a one/two year option too.

Signed for noting and has easily repaid it already. 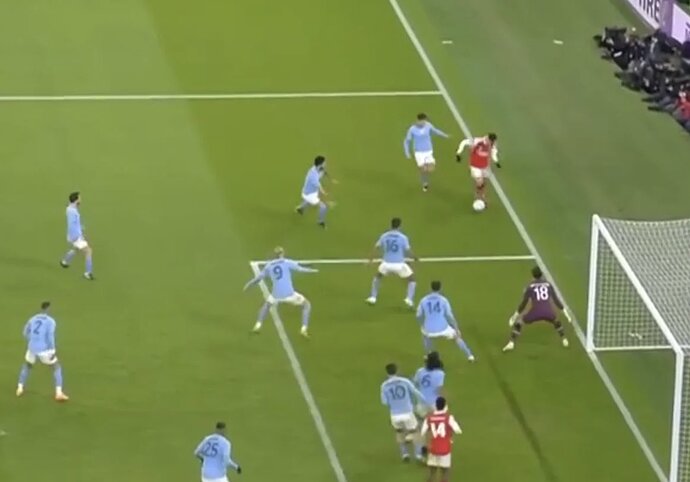 All 11 City players in their penalty box, defending against Martinelli.