He’s one of the knobs though as evidenced last night. 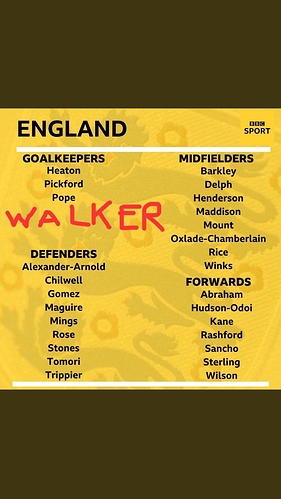 I think he’ll struggle to be honest, reckon it’s more a case of getting valued higher after suffering a longterm injury at Arsenal due to watching the other trash.

I just look at the England team and see the likes of Mings and Tomori and think it wouldn’t be too difficult for him to get a call up. String a few not bad performances together and you’re there. It’s just whether he gets the game time or not.

GK and CM are where we are decidedly average. Very little dynamism and intelligence at the base of the midfield - any two of Henderson, Winks and Rice won’t trouble the best sides out there.

Our two “star” CBs in Maguire and Stones are overrated in this country but in the grand scheme, Maguire / Tomori / Stones / Gomez / Mings is serviceable.

Where we are amongst the very best in the world is the fullbacks and in attacking positions. If we play counter-attacking football in the main tournament against teams who will dominate the ball e.g. Spain, France, Germany etc. then I think that plays right to our strengths. Henderson and the like are workhorses who are very good pressers. Getting the ball to Sterling and Sancho quickly after a turnover will be our best chance, and could do some massive damage to any team out there.

Provided those key plays stay fit and we play to our strengths, then it’s probably our best chance of getting to a major final in many years.

I know I have a bit of an agenda against Jordan Henderson, but was he honestly better in 2019 than every other England player?

Not surprised to see it was a public vote. Pool fans taking over the world. Shiver.

Haha hope its triggered a lot of people.

He’s the first answer to “name an England player” for me, which I think is probably the criteria for winning this in a non-tournament year.

Sterling by a country mile right now with Kane obviously top 2. I think I’d put Vardy, Abraham and Rashford above Hendo too

Henderson has been the best midfielder in international football for the past 2 years. It doesn’t include club football remember.

🏴󠁧󠁢󠁥󠁮󠁧󠁿 Alan Shearer headed in the only goal of the game #OTD at EURO 2000! 𝑻𝑯𝑰𝑺 led England to victory over Germany in a major tournament for the first time since 1966! @England | @alanshearer https://t.co/gOxEKqP1ib

Becks delivery was just phenomenal throughout his entire career.

Who could’ve predicted it would be gazza’s last WC

Sir Bobby is criminally overlooked when people talk about the great managers you know. When you look at what he did at Barcelona, coming there after Cruyff… won two trophies and had Ronaldo not gone on that pointless friendly tournament they’d have beaten Capello’s Madrid to the title too.

Another chance to plug the Bobby Robson doc on Netflix. It’s a great bio of a great man and a great manager.

Is Return to Turin on the iPlayer worth a watch?

Not seen that one but if I’m being honest I’d probably watch any doc going about 90s international tournaments.