Nah but seriously @Phoebica you have to try them

Any middle Eastern restaurant local to you will do them. They might not be as good as the original but they’ll still be amazing.

I’ve been to Turkish restaurants plenty of times, but never have dessert. They never seem appealing. I’m basing that purely on the words used to describe them though. I’ll defo give it a try next time.

I didn’t find the idea of Kunefe that appealing but my sister kept messaging me whilst I was in Turkey imploring me to try it so I gave it a shot and it was heaven.

Me either. And yeah exactly it doesn’t sound amazing but when you try it it’s amazing.

The Middle Eastern kitchen is hugely underrated imo. But I agree about some of the descriptions though. Always thinking ‘that combination can’t work’

. Until you try it

I didn’t find the idea of Kunefe that appealing but my sister kept messaging me whilst I was in Turkey imploring me to try it so I gave it a shot and it was heaven. 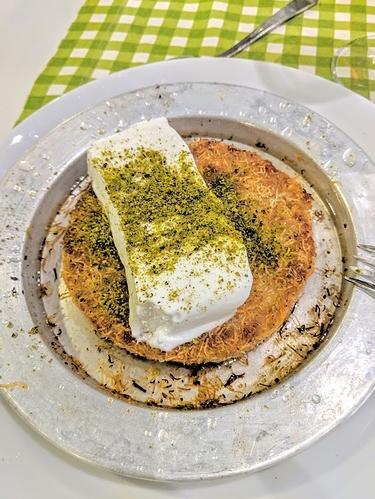 What did you think haha?

What did you think haha?

Haha Bulgarian cousine is heavily influenced by the Turks, I’ve grown up snacking on that shit. It’s absolutely delicious. I had that one in Edirne, it was particularly good!

Speaking of Turkish deserts, It’s tradition here to make baklava for Christmas. My mother makes mean baklava, better than what you can buy in Turkey. It’s so juicy and crunchy. Will give you diabetes but it’s worth dying for haha.

I travelled a little further out in Istanbul and found some shop selling the best baklava I’ve ever had in my life. In general the food in Turkey wasn’t all that I’ve had better food in North London but the baklava was incredible lol

why is everyone still going on about him, he is gone…today he fucked up badly and was saved he can make mistakes too you know everyone carrying on like he is invunerable. Knowing our luck if we kept him he would be making these mistakes and we would be punished.

We are just joking. Tongue in cheek and all that.

Excuse me, this is the baklava thread now.

R.I.P Emi, we will always remember you. The greatest Arsenal goalkeeper of all time.

Excuse me, this is the baklava thread now.

If someone wants to deliver some baklava to my house at approximately 11am, that would be great.

Cazbar on Charles Street does a great baklava. Deliver might run a bit steep for you.

Yeah, Maryland to Hertfordshire might be expensive. Though, that doesn’t bother me. I’m more concerned that it will take too long

I’m sure we could get that expedited to the UK for a reasonable price.

Has anyone ever had cashew baklava? I had it once in Disney World of all places.

why is everyone still going on about baklava

Would be the more pertinent question