generally unpopular and despised for being corrupt, self serving liars, who only have power when in government.

Sounds like he’s basically already a politician by your definition. 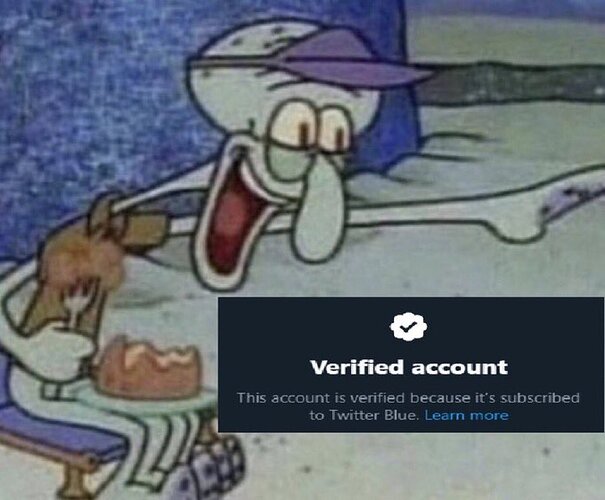 I saw Musk replying to someone asking if Alex Jones would be unbanned with a flat “no” amd that was it. I think that was in reply to some randomer, but I saw Sam Harris had asked Musk that question too.

Anyone here got any insight into where the free speech absolutist is drawing the line?

he argued somewhere that he himself had lost a child at birth or something and he didn’t like when people profited off of dead children. Something like that.

Ah, I didn’t see him reply saying that at the time, just his flat “no”.

So Alex Jones’ “free speech” depends on Musk’s personal feelings and when he takes offence. Seems about right.

Anyone here got any insight into where the free speech absolutist is drawing the line?

He’ll move it wherever he wants but if anyone dares to criticise the line he’s drawn, he’ll just move it again.
Twitter is Musk world, where he is king.

If anyone wants to play in his world, they have to understand it’s his ball, playing by his rules and using his goal posts, that he can shift whenever he wants.

I have more issues with people asking for him to be reinstated, than with Elon’s hypocrisy with free speech.
The guy just got convicted with the settlement amount of 100s of millions and yet people are still shilling for him.

Alex Jones hasn’t been “convicted” of anything.

It’s valid to point out the hypocrisy. Trump’s impact and ability to negatively influence on people is much larger than Jones but he’s allowed back simply people it drives site wide engagement upwards.

That’s why Elon is so desperate to have him come back and tweet something. Trump and Jones are both two extreme right wing dudes who have caused harm with their lies

Not all of them were using Jones as a yardstick to point out Elon’s hypocrisy. They were genuinely asking for him to be reinstated.

Give Trump 6 months to get a shit storm going, and even Musk might want him banned once again.

Give Trump 6 months to get a shit storm going, and even Musk might want him banned once again.

With all the new verified celeb accounts on there he’ll have hundreds of accounts prodding him into constant twitter rampages.

I got a 12 day suspension on Twitter for using the word ‘die’ in one tweet and ‘slap’ in another for harmful conduct. I was talking about the conservative party in the first and a fucking poet in the second. Obviously a new musk era algorithm, cos I could definitely use those words in the past.

The algorithm won’t change drastically within weeks. Elon’s priority is increased revenue via Twitter Blue. Modifying the algorithm is perhaps secondary to him right now

I’m amazed there hasn’t been more of this. An Irish-based senior executive with Twitter has secured a temporary High Court injunction preventing the social networking giant from terminating her employment.

Apparently the filthy capitalist musk offered everyone a decent severance package if one chose to leave twitter after he took over.

I am surprised twitter still works. Trusting the reporting done by conventional media one would think by now it shouldn’t be operational at all anymore.

There are only the facts of this single case reported in that article, no opinion on his management of twitter. One of them facts being that the terms offered are alleged to not be in line with the person’s contract.

Like I say, I’m surprised there has not been more of these.

However, sentiment of the media reports of the last weeks would have me think we would see 100s if not 1000s of such cases indeed. Plus twitter should be entirely dysfunctional by now when 80% of its employees left.

Or maybe Musk was right and the company was far too bloated when he took over. Keeping only the best and most necessary employees and those wanting to stay and adhere to his hardcore vision for twitter reform.

Perhaps the media exaggerated a little here and there and obfuscated some info now and then to make sure the narrative of Musk the egolomaniac is kept in tact.