Makes perfect sense that the club are looking at Bissouma. Perfect midfielder to just sit in front the back 4 and park the bus in the Arteta style. Don’t worry about getting forward passing the ball or carrying it into the opponents 3rd. Just win the ball and then like kick it somewhere, maybe to the feet of our static ass striker who’s playing deep with that elite link up play

Why is this so true

You reckon Guendouzi would’ve done a better job with Partey?

He looks really short of confidence right now. Seemed to be giving the ball off at the wrong times to players closely marked or being pressed. Just keen not to be the one turning it over but not helping his teammates at all.

He still has a lot of quality IMO and is better than people think. Upside is there cause he CAN progress the ball with both passing and dribbling and has relatively high defensive activity. It looked to me those errors leading to goals recently have impacted his confidence.

The way Arteta just hooked him off again for Elneny. Dani looked lifeless.

No, only thing Guendo could have brought to the table last night was winning some fouls and relieving the pressure that way. We were doomed with how Arteta decided to approach the game.

From the same piece I linked in the Arteta thread.

At one stage, Arteta was so frustrated with Ceballos’ failure to track Thiago that he wheeled away & threw his hands up in anger. Was fascinating to watch the Arsenal bench & try to unpick what the plan for Liverpool was supposed to be. @TheAthleticUK theathletic.com/2496370/2021/0…

Arteta needs to take some responsibility on this. Dani’s confidence has been shot to pieces. He has had some rough matches lately and Arteta himself has hooked him early as a response.

Why exactly did he throw him in there against Liverpool? Is he supposed to regain confidence against such a match? And then he hooks him early again. Dani looked lifeless.

I like Mikel but that’s pretty bad management right there.

Dani is in the debit column for me. Liverpool is a huge opportunity. Embrace it or piss off.
If you have real ambition of wanting to get a contract, put up or shut up.
It’s his future. Take responsibility for your own game.

I don’t think it’s that easy. Liverpool haven’t been getting the results but they haven’t been exactly bad. They still press like hell but have been punished due to defensive mistakes and their inability to put the ball in the net. Their midfield ain’t no joke.

I don’t even like Ceballos that much nowadays but he pretty much threw him to the sharks there and then got pissed off because it didn’t work. Elneny has been on a decent form. Why not pick him? The international matches fatigue excuse can’t be used. He didn’t consider it for the rest.

Should have given Ceballos a start against Sheffield imo.

I pointed out on his selection that Klopp would be happy with this selection from a pressing point of view.
Now he wasn’t awful or culpable this game but importantly for him he didn’t produce anything.

Dani was our best player against lolpool man was running around disrupting them like prime Kante. Issue was the game plan was absolute madness and Arteta set the team up for failure. Dani was holding back the dam burst almost exclusively. Well just look what happened when he came off lmaooo. That is such a perfect anecdote of Arteta, was so mad Dani wasn’t following his shit instructions that he hooked him early, but Arteta is such a fucking forehead he was too stupid to see Dani was keeping them out and was our most active defensive player

I didn’t even read the whole post. I just read this and laughed hysterically for the past 2 mins.

That Arteta hairline is something to behold tho, reminds me of someone 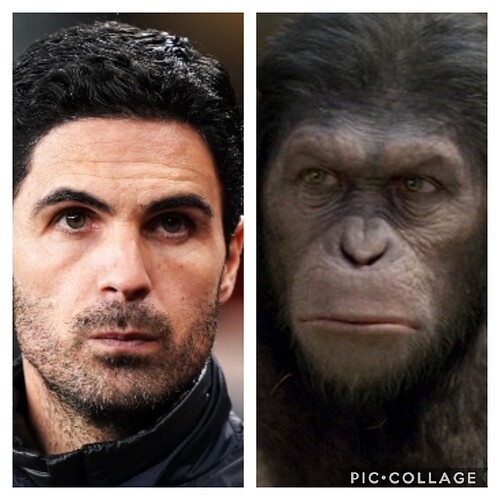 The one on the right would probably do a better job!

He was superb after the lockdown. This season he has not reached that level.

This season made some mistakes and has a clear lack of confidence, maybe why he knows Arsenal will not sign him and the Spain NT will leave him at home for Euros.

Hes shit send him back to Madrid derpppppppppp

Great game from him so far tbf.

Hopefully dupes Madrid into taking him back.