And people call our club a laughing stock? Luiz for £38m??

It was actually a clever ploy to get around FFP.

I’d rather be punished by UEFA than having David Luiz in my team.

Hopefully David can fuck it up a lot of times again, like he always does

What did he say/do?

Conte is really good at motivating players. Costa looked finished last season, while now he is back to his best.

When you have an asshole of a boss (Mourinho) and he gets fired, I think that can just happen naturally 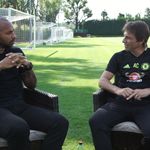 Chelsea face Liverpool in the Premier League at Stamford Bridge on Friday Night Football and ahead of what promises to be a fascinating clash, Sky Sports pundit Thierry Henry chats exclusively to Blues boss Antonio Conte.

I’ve always hated this team , from the days when the ground at stamford bridge quite literaly crumbled under your feet ,to their racist rent boy fans,through to their nouveau riche smugness I have loathed them. A win against them is always sweet but havent seen one that meant anything since we hammerred them at the bridge and santos looked like a world beater for the day !

No Title by anonymous

From the shed end:

2 hours ago, MANoWAR said:
the scary as f**k thing is if we don’t make top 4 some of our better players might look to leave

we have better players?

Ok, we can get Hazard

Conte can be great at motivating players, but once they fall behind, his teams can barely change the result. He is not a very attacking manager.

Put in a cheeky bid for Costa or Fabregas and troll these fckers !!!

Lol! I don’t want that cunt Costa nowhere near my team, while i might take Fabregas back.

To me that looked like a team that was questioning its manager. Every time they played out of the back, I was imagining an internal dialog of “what’s the fucking point of this”.

Within a month it was nowhere near perfect but you could see Liverpool resembling the shell of a Klopp team. Chelsea so far haven’t felt like a Conte team.

They did it to Mourinho and if they’re going to do it to Conte too then they’re a bigger bunch of cunts than I thought. You have a dire season under a “top” manager, another top manager comes in, surely you give it your all…? If bringing in high profile managers doesn’t fix your problems what will? Signing 5 new players?