You can go the gym again because of that away goal mate.
Your back on Lycra watch mate.

Got a feeling we’ll make it difficult for ourselves by going behind, but we’ll win 2-1 in the end.

There average at best and I’m confident we could turn this game into a win at any stage. 4 0 win.

We only need a draw and Greek teams away in Europe aren’t great so I would expect us to go through.
It would be nice to keep a clean sheet as well.

We’re at 9PM again? Ffs I can’t ever get any sleep can I

Your fault for being an hour ahead bl1nko

We should go through on this one although it will be tough.

Blame the person who implemented the one option poll

Forgot this was today!!!

Come on you gunners!!!

Stop complaining. The game is at 1:30 AM here in India

Gives you time to go to the gym bruh

Play the strongest team we have in Europa League going forward. I’m fine with playing a not so strong side in the FA Cup, but the EL and PL run in needs our best team.

I start with Leno, Bellerin, Mustafi, Luiz, Saka, Xhaka, Ceballos, Ozil, Pepe, Auba and Laca. Wouldn’t be agaisnt Martinelli starting either if he’s fit. Most of those guys can be rested for the FA Cup game on Monday if needed.

It’s probably the strongest Europa League for a few years, so it’s going to be tough. I think we can win it, no side is at the level of Atletico Madrid from two seasons back. Roma and Inter would be tricky, but neither can unbeatable. A few decent German sides. Rangers are already through, don’t really fear them outside the away leg. Utd and Wolves, will be the tougher then Roma or Inter imo.

Agree to put the strongest team on the field today 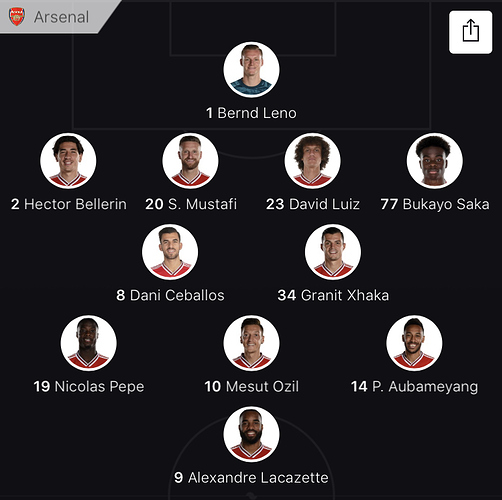