West Brom signed Ainsley Maitland-Niles from Arsenal on a loan deal until the end of the season, in the January transfer window, and he's played in every game since

Sounds to me that he had enough of getting shafted over his versatility at Arsenal.
Cedric and now Chambers have been put out some really good performances to stake a claim over Bellerin’s spot. For some reason, I doubt they will. Best they can hope for is to start some PL games to give Bellerin a rest.

had enough of getting shafted over his versatility at Arsenal.

/Not being good enough to be a starter in either his favoured or back up position.

Southampton, Wolves, and Leicester City are all expected to be interested in signing Maitland-Niles this summer.

Yep, the last couple of interviews make it sound like he had a fallout with Arteta again. Can’t see him accepting to serve as a utility player any longer.

Need to learn what this man is smoking.
Can’t stop running.

Is he playing in midfield or at fullback atm? I haven’t been keeping up in recent weeks but I know he played in the middle against Chelsea

AFAIK he has only played in midfield for West Brom.

Another one manfully trying too make a career for himself like Willock.
Meanwhile Easy street Nelson rides the pine and becomes just another match Attax swap card that no kid really knows.

AFAIK he has only played in midfield for West Brom.

Interesting, not sure how I feel about that from an Arsenal POV cause I can’t see us ever using him there if he comes back, but good for him if he’s getting a consistent run there

Very likely he is leaving anyway, from the few interviews he gave it sounds like he moved on from Arsenal himself. Possibly had another fall out with Arteta too.
Maybe they iron things out with Arteta but I doubt Ainsley will risk wasting another season being Arsenal’s utility man.

Fair play to him. West Brom move was ballsy but it’s paying off for him. I watched his first match there and I wasn’t very impressed but he has been improving with every match since. Proper box-to-box performances. He needs to add some assists and goals to his game now. He positions himself well in and around the box so it’ll come.

Possibly had another fall out with Arteta too.

Seems to be a theme with this manager.

Yeah exactly bro, it’s rare for a manager to come and devalue assets in the way Arteta does, he’s got the opposite of the Midus touch going on, ruining any top quality player that he comes across. Even Mourinho with all his toxicity and public criticism etc… doesn’t destroy the value of the players he falls out with! 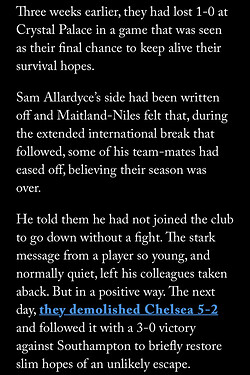 Needs to bring that mentality when he returns

I rather sell Bellerin ahead of AMN.
Shame he won’t want to be fullback.

That said, our midfielders aint all that so might as well give him chances there.

Good luck convincing him to stay

If we can’t convince someone of AMN’s very limited talent to stay with us then we might as well close the club.

Really it should be him trying to convince us to give him a shot. Hopefully we send him packing. He hasn’t been pulling up trees at West Brom, but should still be able to get a relatively decent fee for him.

He’s had a very good spell at WBA actually.
And we really can’t convince him to stay as much as we may want to.
Arteta would have to beg and offer him a starting spot next season. Ain’t happening of course. Doubt AMN will believe a word that comes out of Arteta’s mouth again.

And we really can’t convince him to stay as much as we may want to.

I don’t think anyone wants to convince him to stay. We want to sell, sell, sell